Walk 103: Harrington Circular: Time for a Gin anyone?

Time to walk: A quick stroll that takes a couple of hours

Difficulty: Mainly off road. There are a few hills and it can get muddy in winter, but it’s great to enjoy the changing seasons

Parking: We parked on the road outside the Tollemache Arms. If you intend to use the pub, we’re sure they’d let you park in their large car park

Public toilets: The Tollemache Arms at the start & finish of the walk 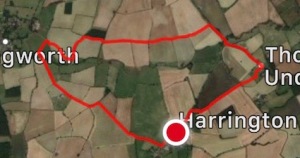 Today’s walk starts & ends in the pretty village of Harrington which lies some 13 miles north of Northampton off the Market Harborough Road & not far from the Leicestershire border. Apparently there’s evidence that the village sits on an extinct volcano!

After the dissolution of the monasteries, the Saunders family became Lords of the Manor of Harrington. In the 17th century the manor house passed by marriage to the Stanhope & then the Tollemache families until it was pulled down in 1745 by Lionel Tollemache, 4th Earl of Dysart. A stone pillar from one of the gateposts now stands in the middle of Desborough. We’ll see the site of the Manor House on this walk

The Tollemache family sold the Harrington estate in 1864, & it was ultimately purchased in 1913 by the Desborough Cooperative Society, which saw great possibilities in the development of ironstone working

A converted barn at Falls Farm in the village now houses a gin distillery, Warner Edwards Distillery. The gin is made with spring water from the farm itself, together with home-grown elderflower & ten other botanicals including juniper, coriander & angelica root. In April 2013 the company was featured on BBC One’s Countryfile

During World War II RAF Harrington used by the USAF was located south of the village across the B576 road, now the A14. It was a later a Thor missile site. There is a museum on the old airfield, but this was closed for the winter when we visited

This is mainly a fields walk so boots on &…

Facing the pub, turn left & walk along the stone wall back towards the village 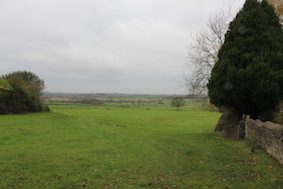 2. Pass by the row of stone cottage & look for a bridleway sign that’s opposite the village hall 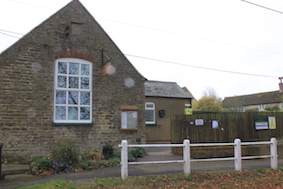 3. Turn right & follow the bridleway down through the field…

Look across to the right & you’ll see that this field is full of humps. hollows & terraces.  In 1231 the Manor of Harrington was bequeathed by John Montague to the Order of St John of Jerusalem (the Knights Hospitallers), which also owned the nearby Manor of Arthingworth, & the Manor house became a priory. In the early 16the century the Order leased the Manor to the Saunders family, which after the Dissolution acquired the freehold. This was the site of the Manor House & is called ‘The Falls’ with the ‘Park’ adjoining. The Falls contains the remains of terraces, fishponds & a sunken garden, which may have had a fountain. The fishponds were constructed to supply fresh fish to the monastic house. Eel, bream, pike, & perch were bred in a series of ponds of varying size fed by channels

The gardens were laid out by Sir Lionel Tollemache, 2nd Baronet who married Hon. Elizabeth Stanhope, daughter of John Stanhope, 1st Baron Stanhope, around 1620 & inherited the estate in 1675. It’s now listed as an historical archaeological site

4. Walk through the gate at the bottom of the field onto the wide bridleway…

There were some inquisitive observers in the field next door

We’re going to follow this bridleway all the way to Arthingworth & it’s pretty straight & hard to get lost. Initially it has hedges on both sides, but when it reaches a gap pass through it & keep the hedge on your right

5. A good marker to aim for is Warren Hill Farm which can clearly be seen ahead & we’ll pass it as we climb the hill 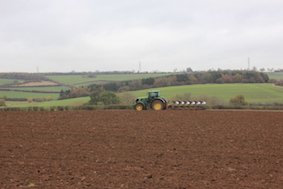 6. At the top of the hill the village of Arthingworth comes into view… 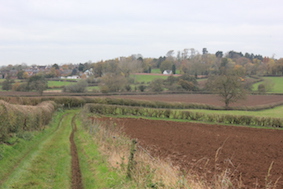 The ‘stream’ is the River Ise, the length of which is totally in Northamptonshire. The river rises in the very field that hosted the Battle of Naseby at the north-western tip of Northamptonshire. Flowing east past Desborough & the Eleanor Cross at Geddington, through the grounds of Ruston Hall, it then turns south & passes Kettering, through Wicksteed Park, past Barton Seagrave, Burton Latimer & Finedon before joining the Nene just south of Wellingborough

7. You now have a choice. If you want to visit Arthingworth continue up to the road & turn left. It also offers the opportunity of a break & some refreshments at The Bull’s Head which we can recommend

Also you could add on another of our walks which starts & ends in Arthingworth & takes you through one of the disused tunnels on the Brampton Valley Way. Look at Walk 53 on the blog

Today though we’re not visiting the village as we have a second walk to fit in later so, instead of walking up to the road, turn right after crossing the bridge in the field & head for the gate with a footpath sign

8. The route lies straight towards the telegraph poles, but crops were just growing & the field was also wet so we decided to walk right & around the edge

9. Again, turn left & walk round the edge of the field & at the junction bear right up the hill staying parallel to the poles again…

10. The bridleway is much wider now & runs in a straight line until meeting another road

Remember when we looked across the fields from Harrington at the start of this walk? Well, now we’re at the other end of that view looking back at Harrington &, even from here, you can still clearly see all the humps & hollows of the manor grounds 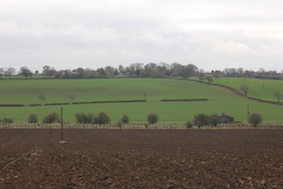 11. Walk past the electricity pylon & then exit the field onto the road through the gate…

Turn right & follow the road down to Newbottle Bridge. This is the River Ise again & we’ve been walking parallel to it since crossing that bridge. A local we met told us that this road is often not passable as the river often floods here

12. If you want to walk back to Harrington by road then follow it to the right. But some rather nice field walking to finish awaits us, so we bear up the left road to the hamlet of Thorpe Underwood… 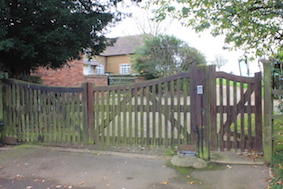 13. Feel over the back of the small gate on the right to find a latch, open it & pass through onto the driveway of a very large house. Watch out as there were some very noisy, but friendly dogs in a separate yard on the left

Walk through the gates on the right…

…into a horse paddock & turn left, walking in front of an impressive property 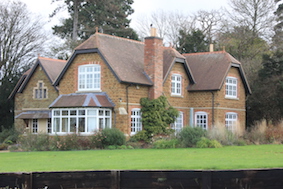 14. Look for a gate in the hedge ahead & get ready for some hills! 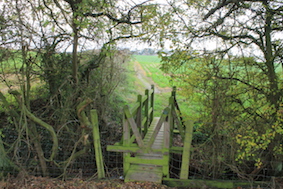 What goes down must go up so now it’s quite a steep climb up the other side. At this point the sun finally came out!

15. At the top climb the stile to enter the churchyard of St Peter & St Paul, Harrington 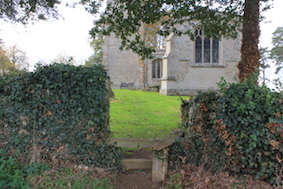 There is no reference to a church or priest in the entry for the parish in the Domesday Book in 1086 which may indicate the absence of a church building at that stage or, alternatively, the absence of a resident priest

The main structure of the present building was erected in the 14th & 15th centuries. Its tower was built in 1809

The church displays a tuba stentoro-phonica, or a speaking trumpet, one of only eight in the country. Sir Samuel Morland claimed to have invented these horns, for speaking between ships. The device, also known as “The Harrington Vamping Horn”, was demonstrated to Charles II in St James’ Park 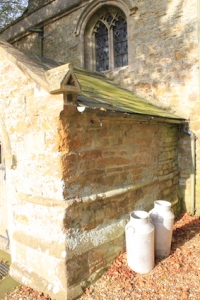 16. Exit the churchyard through the other gate. The autumn colours were spectacular… 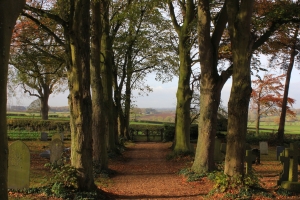 Well that was a most pleasant stroll & didn’t seem at all like 5.5 miles, maybe because you can pretty much see Harrington all throughout the walk which doesn’t appear to make it very far away