Time to walk: Can be done in just under 3.5 hours

Difficulty: A mixture of hard & field paths so may be muddy at times. Mostly flat & easy

Parking: On the road outside the church in Quinton

Public toilets: The Spread Eagle in Piddington & the White Hart in Hackleton

This is another walk where the legwork has been done for me by Richard Parkes – thanks Richard! It’s a medium length stroll starting in Quinton & heading east to take in the lovely villages of Piddington, Horton & Hackleton.

This is simple, easy walking & very enjoyable with some amazing big sky walking at times

This is the second walk on the website that begins from the village of Quinton, which lies about 4.3 miles south of Northampton. For full details about the village please click on this link to take you to Walk 152

1. We start our Walk at St John Baptist Church Quinton. Walk along the road in front of the church towards the junction of School lane…

At the junction continue up the hill into the countryside…

As you leave the village there’s a footpath sign on your right & the path runs parallel to the road. When you reach the end of the path turn right to arrive at the T-junction

2. At the T junction (below) turn right & follow the road down towards Park Farm

3. At the end of the long road walk to the left of the far left fence in the picture below. DO NOT go up the private drive of Paddock House 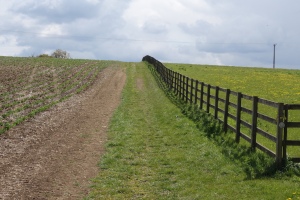 4. On reaching the end of the fence bear right & follow the grass bank separating the two fields towards the hedge in the distance…

Once you reach the hedge, continue straight ahead, keeping the hedge on your right

5. Around 50 m after the end of the hedge bear left up the hill, towards the small woodland area in the picture below… 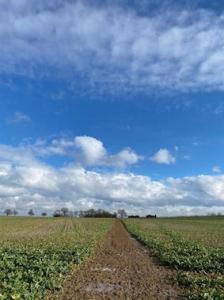 6. Pass the first line of trees and then at the way marker sign keep left through the small woodland area and continue keeping the hedgerow on your left… 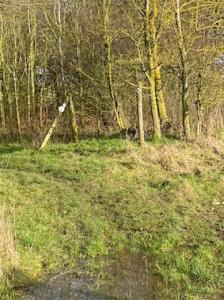 7. At the corner of the hedge turn right & head across the fields towards the farm in the distance. Over to the right, in front of the farm, is actually an airstrip in the summer months!

8. On reaching the farm, go straight through the yard & turn left down the road. Ignore all roads & paths going off in other directions & continue on the road for around 1/2 mile until you reach The Spread Eagle pub on the left 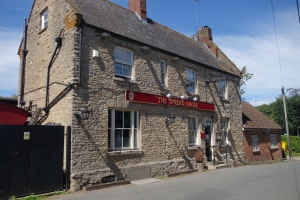 9. The beautiful village of Piddington lies around 6 miles to the east of Northampton

The village has strong links with the Romans. Near Piddington is the site of the Piddington Roman Villa. One of the most important roads in the country, used to transport troops, ran through the village

Several residents of Piddington & neighbouring Hackleton were part of the “dissenter” church movement in the 18th Century. William Carey lived in Hackleton, where he worked as an apprentice shoemaker, & later briefly in Piddington with his wife Dorothy Placket, before departing on his voyage with the Baptist Missionary Society to Bengal. The couple were married in the local church in 1781

Initially Dorothy had refused to accompany William on his voyage, but with all decided & farewells written, the missionary party were denied a licence to travel on a vessel of the East India Company by the company directors. The opportunity then arose to travel in a Danish East Indiaman, & Dorothy was finally persuaded to leave Piddington & join her husband & son, Felix

10. Turn right up the side of the houses in the picture below onto the bridleway… 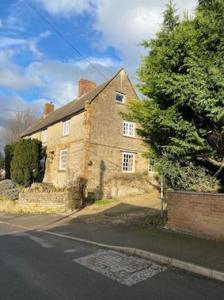 & continue across the large field. This stretch between Piddington & Horton is part of the Northamptonshire Round Footpath

11. At the end of the field, pass through the gap & follow the hedgerow on your left until you reach a road

Walk through the gate & turn left along the road. We recommend walking on the verge as the traffic moves quickly along here. Just after the 30 mph sign below, cross to the safety of the hard footpath

Welcome to Horton, of which there are many throughout the country. In 1086 the village was known as Hortone which basically translates as “dirty or muddy farmstead”

The village manor, Horton Hall was once home to the first Governor of the Bank of England & William Parr, 1st Baron Parr of Horton.  The Hall was demolished between the two World Wars. The park that it once sat on fell foul to the developers, but it’s still possible to see one of the arched gateways on the Denton Road

12. As the road bends left, turn right up Brafield Road… 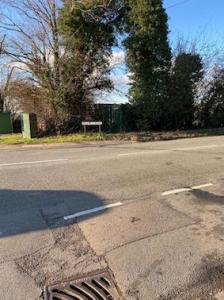 13. When the path ends keep to the verge until reaching a bridleway sign on the left after roughly 300 metres, just before the bend…

Follow the path across the fields in the direction of the bridleway sign, as always keeping to the paths kindly marked out by the farmer

14. Pass through the gap in the trees…

…& continue up the hill across the field. Keep looking all around as this is proper big sky walking

15. At the end of this next field. go through the gate in the hedge… 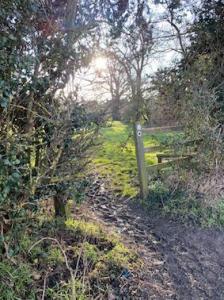 .. & continue slightly to right of the big tree

16. Head straight up the next field to find an exit through a gate into a lane. Turn right along the lane away from the houses…this is Hackleton

Hackleton derives its name from “Hachelintone’ meaning “Estate associated with a man called Haeccel.” Like its neighbour, Piddington, the village has strong links with the Romans

In 1066 Hackleton was in the possession of the Bishop of Constance, passing through the hands of Turgis de Quinton, then the Duke of Buckingham & of Queen Elizabeth I’s minister, Thomas Cromwell & Lord Overstone

17. Just after the barn, follow the short trail through the trees…

18. Head diagonally left across the paddock to the small bridge in the top left corner…

19. Follow the field path diagonally right down towards the village. On reaching the road continue down the hill to the left

We are crossing over the road, but a few yards to the left is The White Hart pub & local shop…

The official first recorded licensee of The White Hart was back in 1739, where Robert Holt is names as the Landlord. Today, the Grade 2 listed building is run by local family, the Sharif’s. It has been trading under their leadership for many years, with one of the two sons being born in the pub, being the first child to be born there in over 80 years 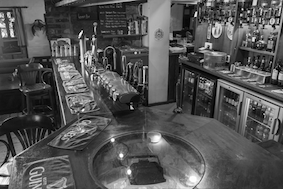 20. Cross over the road & walk down the lane with the village hall & Church on the right…

Hackleton Carey Baptist Chapel was set up by William Carey, the English Protestant missionary & Baptist minister, known as the “father of modern missions”. Carey was one of the founders of the Baptist Missionary Society & came to the village to complete an apprenticeship at The Jetty, the street opposite where the Chapel is built

In Hackleton there’s also Carey Road, a slip road off the main road named after him. The inscription on the chapel reads “This place of worship was erected to the glory of God”in memory of Dr Carey, the father of modern missions to the heathen, & one of the founders, & the first missionary of the Baptist Missionary Society; he toiled as a shoemaker, was converted to God & preached his first sermon in this village.”

Carey appears in quite a few of our walks, most notably in the Moulton Village Walk

21. Follow the path up the hill & back into Piddington, ignoring all other footpaths leading off to the left & right… 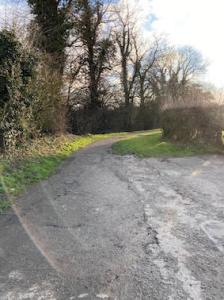 22. At the T junction turn right & then immediately left to re-join the footpath towards the church… 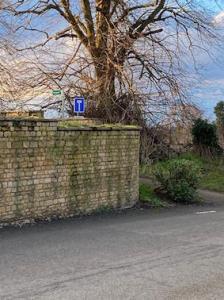 The Parish Church of St John the Baptist, Piddington with Horton was built in about 1290, although it is believed that there may have been a place of worship on this site prior to that date

The tower, rising to a spire, (described as ‘strange & unsatisfactory’) was rebuilt following a rate levy in the Parish in 1847. The style of spire is similar to those where a wooden spire tops the tower, but in this case the spire is of stone

On the east face of the tower is the clock face which is more than a 100 years old. It’s believed to have been made by Dent & Co, who manufactured “Big Ben”

23. Turn left at the church gate & then right immediately towards the open fields

…& walk diagonally right across & down the field, heading for a further stile behind the tree

25. After climbing the stile, cross the bridge & keep straight ahead over the field on the well-marked path. On reaching the other side of the field, continue ahead through the gap…

26. Cross over the road & keep straight ahead, with the trees on the left, ignoring the left & right way markers (during the summer months there are lots of sunflowers along here)

27. At the corner of the woodland area continue straight over the fields…. almost there now!

28. Cross over the bridge & follow the path up the hill through the next field…

29. On reaching the road & T-Junction follow the familiar footpath you left the village on, at the start of the walk, all the way back down to where you left your car in Quinton

So that’s the end of another “big sky” walk taking in some of our lovely villages. A great walk for a warm, summer’s evening – thanks Richard!