Time to walk: Roughly an hour & a quarter, but it’s a city walk so there’s lots to stop & look at

Difficulty: Easy, flat & all on hard surfaces, so suitable for all weathers

Parking: We parked in the new Bond Street development

Map of the route: None

We’d always heard stories that Chelmsford is a small, yet beautifully formed city. Working in the area we’d thought we’d take the opportunity to finish early & have a November’s evening walk (hence the darkness of some of the photographs)

So what can we tell you about Chelmsford…

Chelmsford is the county town of Essex approximately 32 miles from London. It was once a small Roman military settlement near the junction of the River Cam & the River Chelmer. It was named Caesaromagus or ‘market-place of Caesar’, giving it the great honour of bearing the name of Caesar – the only town in Britain to do so

Throughout its history, Chelmsford has played host to a number of famous figures including Charles Dickens, the Duke of Wellington & Oliver Goldsmith. Chelmsford was also home to worldwide pioneer Guglielmo Marconi, the inventor of wireless. In 1899 Marconi’s Wireless Telegraph & Signal Company opened the world’s first radio factory in Hall Street & the first entertainment radio broadcast was made from Chelmsford on 15th June 1920

Shall we go & have a look then?

1. Our walk today starts from the brand new underground car park of John Lewis in Bond Street. In late 2016 this is an area that’s still under development with the restaurant section still to be completed

2. Pass through the arch & turn right towards the Shire Hall which can be seen at the end of the street 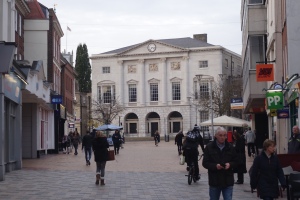 The Shire Hall is an impressive Georgian building which still dominates the town centre. When it was built it was designed for meetings of the county council & other civic meetings. It also housed the assizes, the quarter sessions for the county & the petty sessions for the division

Inside the building on the ground floor was an open area designed to be used as a corn exchange & then two courts with a jury room & other rooms for the administration of the courts. On the next floor was a elegant assembly room & a music gallery. It still has the largest ballroom in Essex

3. Cross over the road to the Hall & walk round the left side passage into the Cathedral yard… 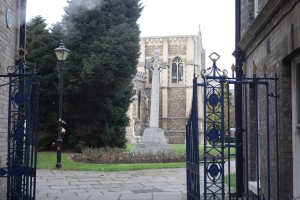 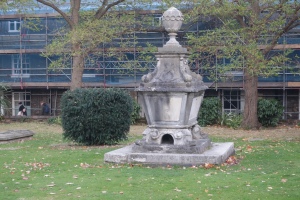 Come back round towards the entrance to the cathedral. The church of St Mary the Virgin was probably first built along with the town eight hundred years ago & was rebuilt in the 15th & early 16th centuries

In 1914 the church became the cathedral for the newly created diocese of Chelmsford. It’s open so let’s go & have a look inside…

4. The interior of the cathedral is stunning & we have to say thanks to the two “friends” who were happy to impart their knowledge. They weren’t the ordinary kind of guides you’d expect to find in a building like this which confirms you should never judge a book by its cover 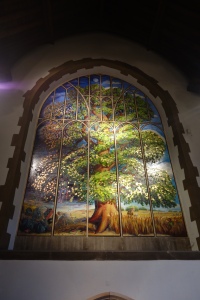 Mark Cazalet was commissioned to create a painting on thirty five oak panels depicting the Tree of Life. The inspiration behind the piece was the music & choral tradition of the Cathedral with the symmetrical design of the tree representing opposing ideas with the tree bursting into life on one side & dying back on the other. The sections within the tree are rather unusual & you can spend quite a bit of time looking through it…

Almost next door’s a rather ornate piece… 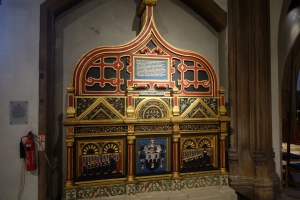 This is the Mildmay Monument which contain the remains of Thomas Mildmay & his wife, Avice. Mildmay was a renowned squire 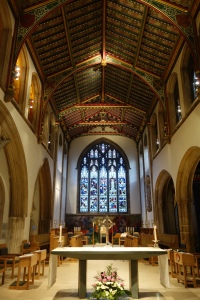 5. We’ll come back & explore this beautiful place again, but light’s fading rapidly now & we’re really only at the start of this walk so time to crack on

Come out of the cathedral & retrace your steps down the alley crossing the road towards the statue of 19th century judge, Chief Justice Nicholas Tindal…

Sir Nicholas Conyngham Tindal, PC was a celebrated English lawyer who successfully defended the then Queen of the UK, Caroline of Brunswick, at her trial for adultery in 1820. As Chief Justice of Common Pleas, an office he held with distinction from 1829 to 1846, he was responsible for the inception of the special verdict “Not Guilty by reason of insanity” at the trial of Daniel M’Naghten. He was born in the city

…& if you fancy a bit of body artwork pop down the alley to Harry Flashmans! 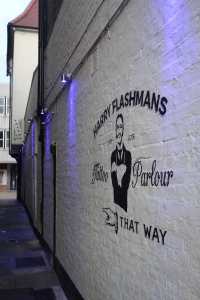 7. At the end of the street pass the shopping centre & walk along New London Road towards the bridge 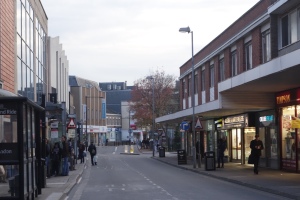 There’s reminders along here of where we are…”Get in my son!” 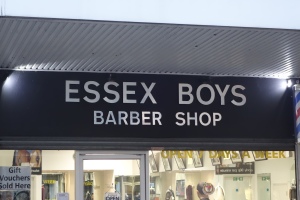 8. This is a river we last saw in Cambridge, the Cam 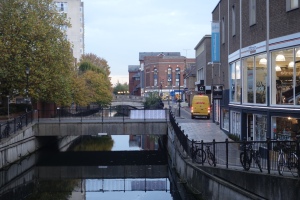 Cross the bridge into Parkway passing the Chelmsford Institute building on the right, which although is listed & very impressive is actually very difficult to find any information about 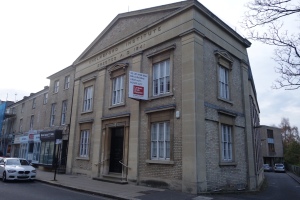 At the junction on the left’s a plaque showing that this was once the site of a 13th century Dominican priory. The Order was founded in 1216, the first house being established in Cambridge. The Dominican sought to teach the locals by public preaching & were an active part of the community. The Chelmsford Friars founded their church on the main route to London. In 1538 on the dissolution of the monasteries on the orders of Henry VIII, the priory was pulled down & the land sold

9. Cross through the underpass, following the signs for the Infirmary & Dispensary to emerge beside the building itself… 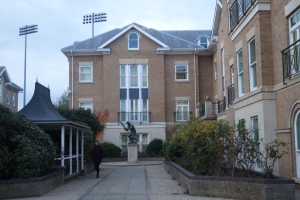 10. This is England & Essex cricketing legend Graham Gooch. Behind him is Essex’s ground

Graham Gooch was one of the most successful international batsmen of his generation, & through a career from 1973 until 2000, he became the one of the most prolific run scorers of all time, with 67,057 runs across first class & limited-overs games. After 118 Tests in 2009 he was inducted into the ICC Cricket Hall of Fame

On the left’s the entrance to old of Chelmsford’s oldest businesses, Lucking & Sons, funeral directors

On-going research has traced the family to the Great Waltham & Little Waltham areas of the city. In 1631 a William Lucking of Little Waltham carried on the trade of carpenter & joiner & would, no doubt, have been asked to make coffins

12. Next door’s the Nonconformists cemetery

The cemetery contains the grave of an African slave, Joseph Freeman, who escaped to Chelmsford at the start of the American Civil War. He worked at the local Iron Works. Joseph died from consumption on November 28, 1875

13. Continue to the crossroads. Over the road’s BBC Radio Essex who were clearly getting ready for Children in Need 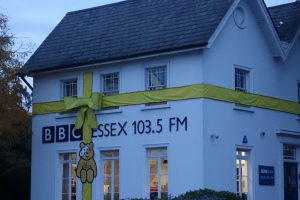 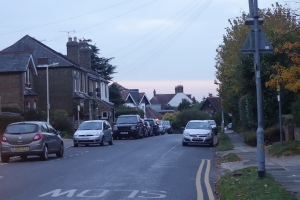 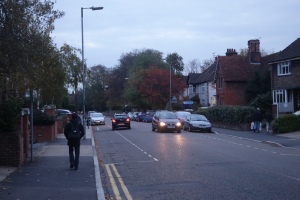 14. Pass Chelmsford College on the right & the Mildmay Almshouses which date back to 1565 where the pavement’s raised on the left…

There’s a wealth of ‘watering holes’ along here if you fancy a stop. Take your pick from the modern to the traditional 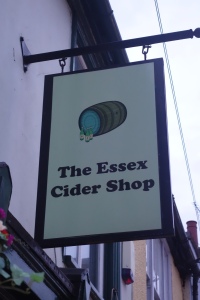 15. It was getting pretty dark now, but this is seemed to add a quite charming look to the street, especially The Bay Horse…

The Bay Horse is a beautiful 15th century Tudor style building & inside, the traditional appearance contains original features such as the old beams & wood furnishings. Reputed to be the oldest tavern in Chelmsford, this Grade II listed Tudor building has been lovingly restored & renovated after a £250,000 refit

We told you that there were several independent shops along here, including ones for all shapes & sizes

16. At the end cross Parkway via the subway… 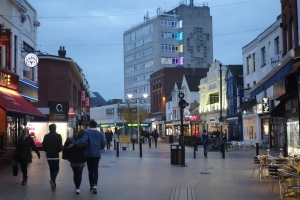 17. Cross the river once more & stop at the junction with Springfield Road on the right where there’s a blue plaque signifying a literary reference…

The Crown Inn was a staging position the Colchester to Harwich route. It was renamed the Black Boy in 16th century & then pulled down & rebuilt in the early 18th century. Throughout its time & location it was always a meeting place, including the Duke of Wellington & Charles Dickens who immortalised the pub in his novel Pickwick Papers

18. Carry on up the High Street where ahead you can see the Shire Hall once more. On the right’s the Royal Bank of Scotland. This building was once the Mansion House & the lodgings of the judge when he came to sit at the city assizes 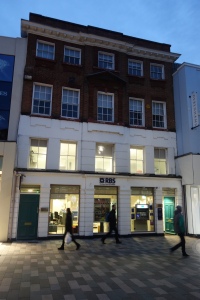 Lloyds Bank is also a rather interesting building too 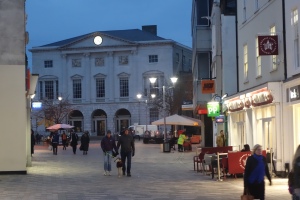 So that’s a very quick, almost night walk round one of Britain’s smallest & less known cities. It’s also a lovely place & well situated for a weekend break as there’s plenty to explore within easy reach too

The Cathedral’s the star of the city, but there’s plenty more to explore so we’ll definitely be back to have another look – next time we’ll do it in daylight though!