Walk 137: ‘The Broomway’ Linear Walk…”One of the most dangerous paths in the UK”

Time to walk: Just over 1 hour

Parking: Carefully just off the road outside Great Wakering, Essex 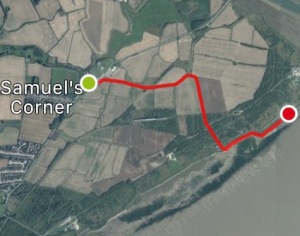 We were staying with friends in Shoeburyness, near Southend on Sea. It was a Sunday morning after a few drinks on Saturday, so a walk to “blow away the cobwebs” was a welcome suggestion

We’d heard about a mystical, ancient footpath called ‘The Broomway‘ that leads out into the sea & is only accessible at low tide, pretty much like the causeway to Lindisfarne in Northumberland, or St Michaels’ Mount in Cornwall

The tide wasn’t working in our favour to access the footpath, but we were determined to see it, so made our way out past Great Wakering, where we parked & started our walk through the eerie MOD ranges

1. Park up & walk towards the barriers. The route is the right-hand road & don’t worry if the barrier is down as they will raise it for you 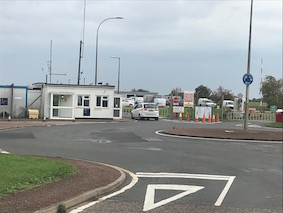 “The area of Shoeburyness & Foulness Island was first used by the military in 1848 when the British School of Gunnery was opened. The area’s geographical features make it the ideal location for the MOD’s Test & Evaluation requirements with the flat tidal sands providing the large secure safety area needed for long range firing & the recovery of shells. These natural features, coupled with today’s infrastructure & expertise, mean that the site continues to provide an unrivalled & unique UK facility for critical military test, evaluation & training activities’

Needless to say there are warnings everywhere… 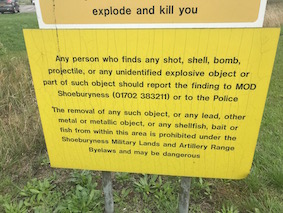 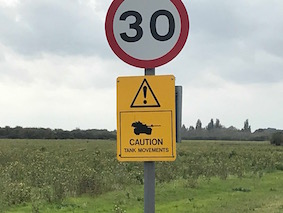 2. Barrier lifted, follow the road towards the coast. Under no circumstances stray from it! 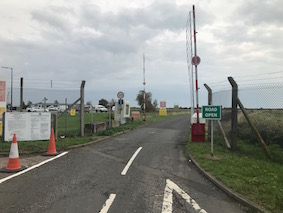 The road bends through the flat landscape &, given it’s been left barren for years, is pretty featureless. Occasionally there are small roads leading off to the left & right. Also we weren’t sure who Ben is/was… 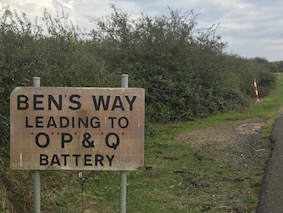 3. Continue through another barrier… 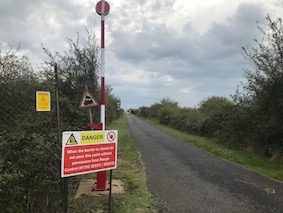 The whole area has large sheds & is criss-crossed by a matrix of railway lines Looking at old pictures, these could have been used for transporting artillery 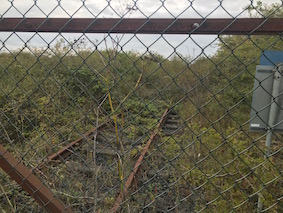 4. Eventually the road arrives at a large, lookout tower & rises to the sea wall… 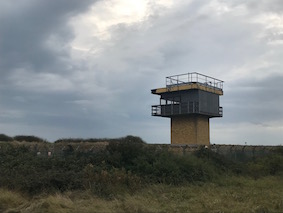 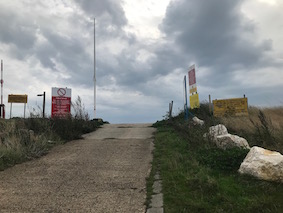 5. We mentioned that the tide was in, but maybe this made the whole feature even more mysterious. This area is known as the ‘Wakering Stairs’ & is the start of what has been called “the deadliest path in Britain”…The Broomway 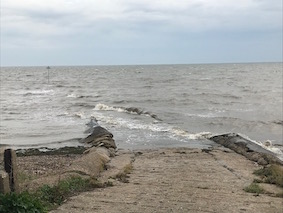 The Broomway is thought to have killed more than 100 people over the centuries; it seems likely that there were other victims whose fates went unrecorded.

At over 600 years old, recorded as early as 1419, the Broomway runs for 6 miles along the Maplin Sands, some 440 yards from the present shoreline. It was named for the “brooms”, bundles of twigs attached to short poles, with which the route was once marked. A number of headways ran from the track to the shore, giving access to local farms. The track is extremely dangerous in misty weather, as the incoming tide floods across the sands at high speed, & the water forms whirlpools because of inflows from two rivers

6. Click on the play button below to see a film of people walking the Broomway…

7. To continue a walk, you have a choice of going left or right along the sea wall. We chose the left path… 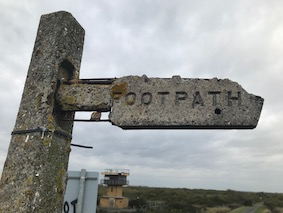 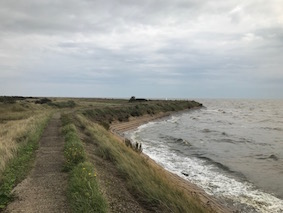 Without a map we were unsure as to where the path went to, but a fellow walker told us that it crossed the Foulness Island bridge further along & would be an extra 3 miles to cross this & return by the road

There are also the remains of some sturdy concrete buildings. These have a path heading away from them which looks like it heads back towards the start of this walk. Whilst there are no signs, a local strongly advised against following it due to all the warnings about explosives etc

8. So for us, we decided that we’d gone as far as we wanted to, & would head back to the start by retracing our steps

This is a fascinating place to visit but, as ‘The Vintage News’ tells us there are many ways that you could join the numbers that have perished walking the Broomway…

“First, just getting to the Broomway involves a genuine risk of getting caught in quicksand. Stepping off of the rubble-strewn causeway that leads there will land you on the treacherous sucking mires of the Black Grounds, or as locals know it, the Coffins. And while you aren’t likely to fully submerge, you’ll be trapped for the incoming tides to finish. How’s that for a mood setter?

Once you hit the tidal plain and start walking, you have, at best, a four-hour window to complete your trek. And you’d better know your tide tables.

From a distance, someone traversing the Broomway appears to be walking on water, with two to three inches underfoot at any time. But that water can rise almost as fast as you can take a breath. The incoming tide pushes in across the flats at a speed no one can expect to outrun, and the current is not one you can break free of. And even if you were of superhuman speed or strength, the cold waters would certainly chill the life right out of you.

The gray can kill you, too. Yes, the stark gray of mists that roll in from the North Sea. In this surreal curtain, any trace of higher ground disappears and the sea, the sand, the standing two to three inches of water you are constantly sloshing through, and the sky all become a uniform pale slate gray, a color undecided and experimenting between light and dark. At that point, up, down and any cardinal direction around you is indistinguishable from anything else.

Many people have become disoriented and wandered off course, delaying their exit long enough that the incoming tide and its accompaniment of dangerous eddies drowns them.

There’s one more potential killer, and this one is born of man, not nature. It’s unexploded ordinance. Foulness Island is now owned by the Military of Defense and is operated by a private contractor for testing explosives and even aircraft ejection seats.”

So best stick to our walk…