Distance: Not really a walk, more of an exploration of a beautiful area. There are several walks that can be done along the river etc

Time to walk: Not applicable

Difficulty: Our look around is all on roads & hard paths

Parking: The car park at the top of the village – free to National Trust Members

Public toilets: In the Visitor Centre

History is courtesy of the National Trust…

“Flatford is a small hamlet close to East Bergholt in Suffolk. It is most famous for Flatford Mill, Willy Lott’s Cottage & Bridge Cottage, immortalised in the paintings of John Constable

The Domesday Book of 1087 mentions a mill at Flatford & records William the Conqueror‘s decision to keep it & some of the surrounding land for himself. This obviously means there was a Saxon mill at Flatford before the Norman Conquest of 1066

In the late fourteenth century, the The Manor Court Rolls contain a record of a fulling mill at Flatford that was called ‘Flotfordmelle’

As the town populations swelled they created a huge demand for bread & Suffolk farmers realised they could make more money from growing grain (to be made into bread) than from grazing sheep for the wool & cloth trade. Fulling mills, including the mill at Flatford, were converted into corn mills so that they could grind grain into flour”

Anyway…that’s enough of the history lesson for the time being. Flatford is very small so this isn’t a structured walk…it’s more of an exploration. Come on…

1. We park in the National Trust car park at the top of the village & walk down the steps. The Visitor Information Centre & toilets are on the left.

The first cottage we come to is Bridge Cottage… 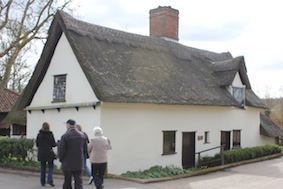 We do have the option of continuing over the bridge, but decide to stick to this side of the  river first & have a look round the cottage…

During John Constable’s youth, the family living in Bridge Cottage were tenants of his family. People collected tolls from the boats passing through Flatford Lock along the River Stour. Have a look at this link for a more detailed history of the cottage 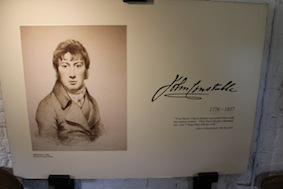 It is very low in here!

3. Right…back outside & there’s a small garden that looks out onto the river…

Next door to Bridge Cottage is the National Trust Gift Shop & a fantastic Tea Room – the scones are immense!! They actually have a ‘Scone of the Month’ – when we visited it was ‘Chocolate & Hazelnut’. Here’s a link to it being made…yummy!

4. Passing the Boatbuilding Dock we arrive at the impressive property know as The Granary…it looks even better from the other side of the river (see later)

The Granary was once owned by John Constable’s father. Built around 1740, in the past it’s been a wool store, a granary, a steam mill & a macaroni factory

We met the owner & his dog coming up the lane

5. Further down the lane on the left is Valley Farm. How stunning is this place… 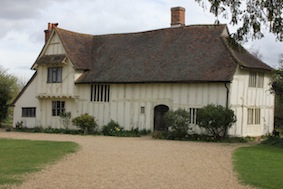 Valley Farm was built in the early fifteenth century & is an example of a medieval, open hall house which is now a Grade I listed building

In 1959 Valley Farm was acquired by the National Trust. The National Trust leases it to the Field Studies Council for student accommodation, but it is open to the public on Heritage Open Days

6. Ok…it’s now time to come to the ‘Main Event’…Flatford Mill

We think the first thing to say about this place is it’s absolutely everything you hope it would be &, on a day like today, simply stunning

Let’s firstly look at the Mill itself… 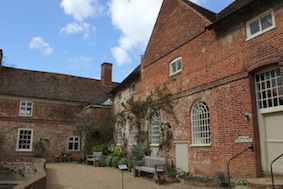 The mill is leased to the Field Studies Council, a group that uses it as a locations for arts, ecology & natural history based courses

7. Right…do you want to take that photograph? Come on then let’s stand with our backs to The Mill on the steps facing Willy Lott’s house &………snap!

8. Let’s have a closer look at the cottage that was in ‘The Hay Wain’, also known as Willy Lott’s house…

Willy Lott (1761-1849) was a tenant farmer who worked the 39 acres around Flatford that made up Gibbeon’s Gate Farm. He lived in a house attached to the farmland, which long after his death, became known as Willy Lott’s House. Willy Lott’s parents lived in this house, Willy & his sisters and brothers were born there

Although he could not read or write, Willy made enough money to buy the house & farmland around Gibbeon’s Gate in 1825. He never married, living with his sister Mary & he died in the house at the age of 88 leaving the farm plus about £450 to his sisters, their children & his brother’s children

For the full National Trust details click on this link

9. Right it’s time for a cup of tea & maybe one of those scones so walk back up to the cafe & then over the bridge to the other side of the river

In the meantime…what do other visitors think of this place? Well click on the tripadvisor link to see..

10. Suitably refreshed, it’s now time to head over the bridge to have a look at the other side…

…& we immediately get a different perspective of Bridge Cottage 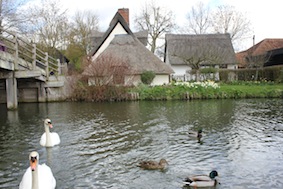 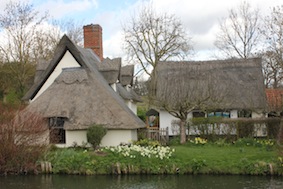 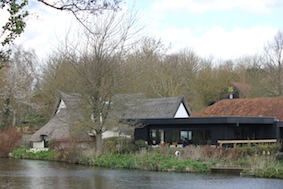 11. We’ll have another look on the way back. Next along here is a different view of The Granary…

Fancy staying over there & getting up for an early morning row along the Stour before breakfast? Yes please… 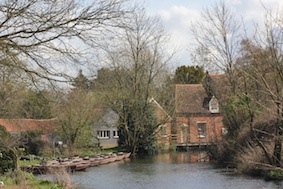 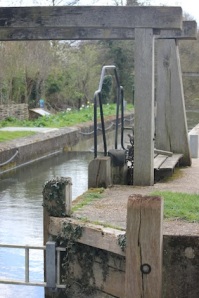 …& then we can see the workings of The Mill…

13. Well that’s our short stroll done & unfortunately, we haven’t time to do any of the other walks around here but…we will come back & try them another time as it’s such a beautiful place

In the meantime here’s a couple of final shots… 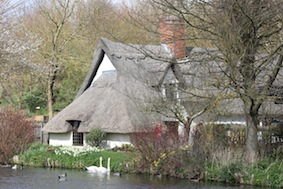 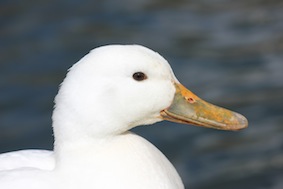 So…this isn’t really a walk, it’s just a ‘visit’ but we hope you can see how stunning this place is