MARCH 2021: PLEASE NOTE THAT DUE TO HS2 CONSTRUCTION SOME OF THE FOOTPATHS HAVE BEEN CLOSED

Time to walk: Roughly 75 minutes so a nice easy stroll

Difficulty: A mixture of hard surface & field walking. There are also a few inclines & several stiles. When we did this walk in December 2017 it was extremely muddy in places so maybe this is more of a summer walk when the path’s are dry. Be careful with some of the stiles as they may be slippery, plus there was an issue with access to part of a path

Parking: We parked on street in Church Lane 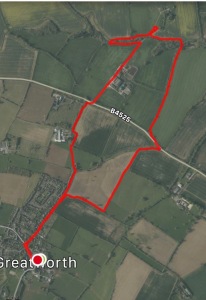 We’d never been to Greatworth before, but what a lovely village! We’ve taken the following information from their website

“It lies about 4 miles north-west of Brackley & has been here since Saxon times at least since when Saewulf held the land. After the Conquest, Odo, the Bishop of Bayeux & the half- brother of the Conqueror, held the land. As far as is known, the only thing Odo did relating to Greatworth was to appoint William Peverel to be his under-tenant here. Peverel had 161 other holdings as well, including Nottingham Castle

Thereafter Greatworth was held by a number of families. There were the de Keynes, the Leuknores, the Nevilles, a Draper & the Lords Windsor. The last Lord Windsor, William Pargiter held property & one of the Pargiter ladies, Eleanor, married Charles Howe who built himself a fine mansion where he lived until he died in 1741. The house burnt down on Christmas Eve 1793 & all that remains are the two pineapple gate piers & the garden pond. Charles Howe is chiefly famous for writing a book entitled ‘Devout Meditations’ which was very well thought of in its day. He also had a deer park and a field called ‘The Park’ is still extant today

Greatworth used to be well known for its RAF station. This was a wireless receiving station & the masts & aerials could be seen from miles away. It opened  around 1940 & closed in 1986. The buildings are still here as are traces of the masts & their foundations

1. We’ve parked up in Church Lane outside St Peters…

The church is believed to date back in parts to the 13th century but was restored in 1882. Unfortunately it was locked when we visited

2. Walk down to the junction & turn right along Brackley Road…

On the right’s the Methodist Church 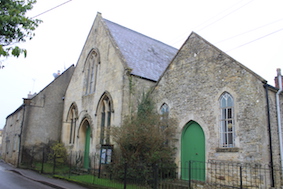 3. Slightly further on’s the village pub, The Greatworth Inn dates back to the 16th century & is a real village pub 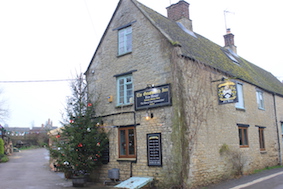 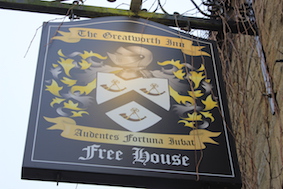 4. The pub is very much the centre of the village &, at the crossroads, we turn right & walk up Helmdon Road…

Greatworth an extremely friendly village & the locals were more than happy to offer a welcoming “hello” & chat further. Pass the school & then the last row of houses on the left before exiting the village 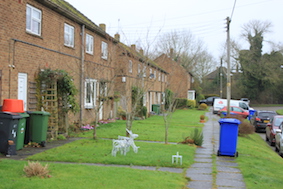 5. As the road turns right look out for a signpost over a stile into a copse on the left…

…& at the end of the copse, climb cross the second stile into the grass field

6. Cross over the field diagonally to the next stile…it was a really misty start to this December day 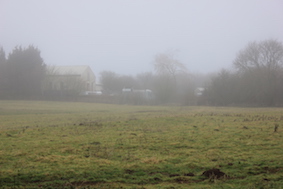 7. On reaching the B4525 turn right, cross over & down the entrance to Stutchbury Manor Farm 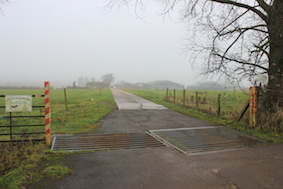 It was along here that we started to have a bit of fun….the route shows us turning left half way along the farm track, but the farmer had blocked this with an electric fence….

8. Anyway we risked life & limb to continue this walk for the blog & head diagonally left, keeping the farm buildings on our right, down to the bottom of the field. Cross the bridge at the bottom 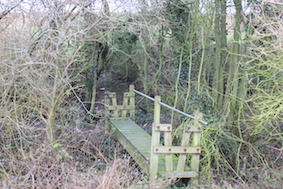 Be careful crossing it as, the we walked in December, it was wet & very slippery. Once over though fight your way up the slope through the bushes & turn right along the field edge

9. Pass through a gap in the hedge into another field & at the end rejoin the main path that we diverted off the farm from… 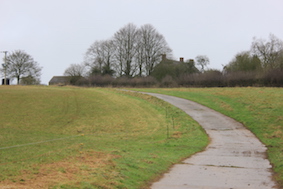 Look for a signpost into the field on the right 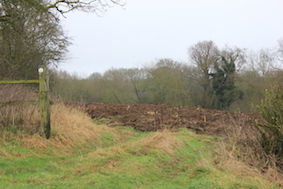 10. We’re now basically turning back on ourselves & the path would normally go across the field but, because it’s so wet we walk round the edge…

11. Be careful down this slope as it’s slippery in wet weather. Cross the bridge & note the pond to the left which we’d like to see again in summer as it’s a classic dragonfly haunt

12. Having safely negotiated the bridge continue straight up the hill keeping the hedge on the right… 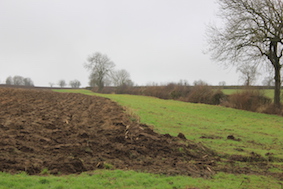 …to arrive at the road we crossed earlier

13. This time though exit carefully onto the road, turn left & then cross the road down the single track… 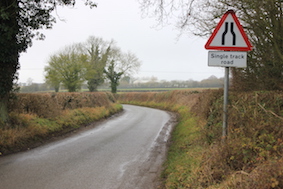 14. Today’s winter so we can’t walk along the suggested diagonal path across to the right towards the large tree. Today we have to follow the field edge to the end & then turn right…

Near the tree, turn left through the gap in the hedge & then right again towards the road once more

15. Exit the field back onto the road once more turning left back towards the village…

So that’s another very short was. We have to ask ourselves though that the only place in The Shire that we have problems accessing footpaths is in the South. We would urge fellow walkers to report restrictions on paths as that will only benefit all of us

Despite that, it’s still a fabulous little walk so…