Time to walk: We dawdled so a couple of hours

Difficulty: Initially on hard paths & country lanes, but then on grass. It’s slightly undulating, but nothing strenuous

Parking: We parked on the road in Guilsborough 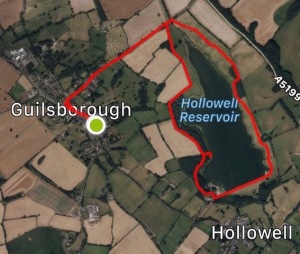 This walk comes with a health warning…it’s taken from Judy Smith’s excellent book, ‘Waterside Walks in Northamptonshire’ which was first published in 2000

At that time, as we’ll see, the book recommends parking in the car park off the Guilsborough Road, which is now locked & closed. If you’re parking in Guilsborough you can still climb the fence. Anglian Water who manage the reservoir require a permit for people to walk around it. Their website was updated to include this requirement in May 2021

Hollowell Reservoir lies close to the lovely village of Guilsborough, which is where the walk starts & ends, outside the Witch & Sow pub (formerly the Ward Arms). Guilsborough played a part in the Battle of Naseby, General Fairfax camping out on the hill nearby before setting out for the battle

1. As mentioned, the walk starts outside The Witch & Sow in the village of Guilsborough which is made up of two hamlets, Guilsborough & Norcroft, the former referring to the Roman fort, or referencing the earlier Late Bronze Age/Iron Age Enclosure on the same site. The Roman fort was an outpost of the settlement at West Haddon & the Guilsborough encampment is believed to have been the work of Publius Ostorius Scapula, under the reign of Claudius. When the south rampart was removed in the 19th century, many skeletons were found

The pub dates back to the 16th Century pub & has strong historical connections connections, including The Battle of Naseby, William Wordsworth, the sinking of R.M.S. Lusitania, Shackleton’s 1914 Trans-Antarctic Expedition, & James 1’s witch hunts

On 22 July 1612, four women & one man were hanged at Abington Gallows in Northampton for the crime of witchcraft, also known as the Northamptonshire Witch Trials. Of those five, Agnes Brown & her daughter Ioane/Joan Vaughan (or Varnham) were from Guilsborough. They stood accused of bewitching a local noblewoman, Elizabeth Belcher (née Fisher) & her brother-in-law Master Avery & of killing, by sorcery, a child & numerous livestock

Although the hangings can be legitimately traced back to actual historic events, the story most commonly repeated is of less certain origins. The tale goes that there was an elderly witch called Mother Roades, who lived just outside the neighbouring village of Ravensthorpe. Before she could be arrested & tried for her crimes of sorcery, she died. Her final words told of her friends riding to see her, but that it did not matter because they would meet again in some other place before the month was out

Her friends were thus apprehended riding on the back of a sow between Guilsborough & Ravensthorpe & were taken into custody & hanged, thus they were all reunited in death. The problem with this story is that, although Agnes Brown remains a constant upon the pig’s back, her companions swap names depending on the version being read. Three witches were on the pig, but the potential riders, other than Agnes Brown (who appears as one of the riders in all versions), are: Kathryn Gardiner, Alice Abbott, Alice Harrys & Ioan/Joan Lucas. It would appear from records that all of these accused stood trial together, however the reporting only covers the hangings of one day in 1612, so the fates of the others are not known

2. On the other side of the pub car park is the magnificent Old Grammar School that was was founded in 1688 by John Langham of Cottesbrooke, an Alderman from London. Today it’s divided up into private dwellings…

3. At the top of the hill on the left is the local school & the rather attractive village sign… 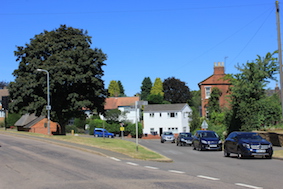 4. Have a look at the rather strange lock-up buildings in the centre of the green, part of which is the Old Coal Barn, built in 1826 as a private dwelling for the old Coal Club 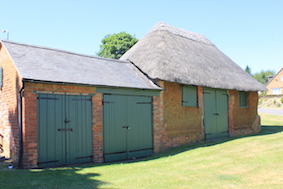 5. Walk past the green to the right side & turn down Norcroft… 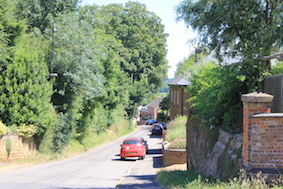 The roadside path soon runs out as we leave the village. The reservoir lies across to the right, but it’s in a dip & can’t be seen from the road. Just before the small bridge over the stream, look for a gate on the right….

The sign is also still there showing the path… 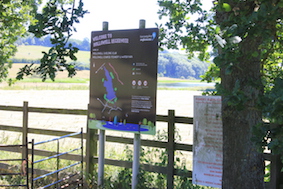 6. Walk straight ahead keeping the hedge on the right – the reservoir, which covers 140 acres, can now be seen directly ahead

7. At the end of the hedge, turn right & head towards the small gate leading into the predominantly Scots Pine woods… 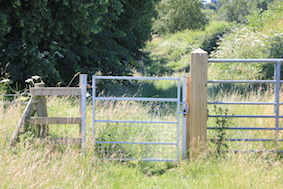 The track’s very overgrown & Anglian Water tell us they keep it like that to attract the wildlife. It’s not hard to follow though as it simply follows the hedge round to the left & then up the hill

The trees are quite dense, but you still get glimpses of the water – we’ll see a lot more of it shortly 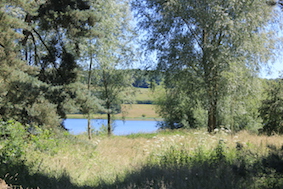 8. The path now becomes much clearer & enters a wood for a short while & eventually reaches a crossroads where we need to continue straight ahead…

…where it now becomes a car track

9. Soon we begin to climb again & on the left now can be seen the start of Hollowell Sailing Club

Pass by the extremely large house to drive at the main entrance into the sailing club which was established in 1966. Turn left & climb the stile

10. For the remainder of this walk we’re going to have excellent views of this beautiful reservoir. Walk down the hill to arrive at the dam…

…&, on a day like today the view is stunning 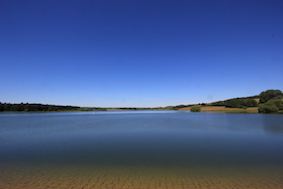 11. Look back to see the sailing club buildings…

Continue straight across the dam to the end 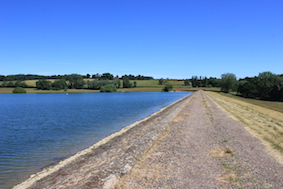 12. In this corner is the outlet for letting water flow away from the reservoir. Walk across it & continue to follow the water round to the left, through a gate & back onto a grassy track 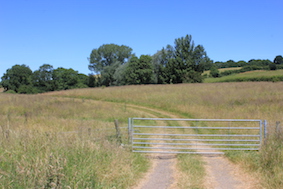 There were large flocks of water birds gathered along here…

13. You can see why people think this our Shire’s most beautiful reservoir & it’s a shame more people can’t enjoy it… 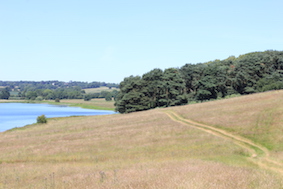 14. The path leaves the waterside for a short time along a stretch which looks like it would get muddy in wet weather 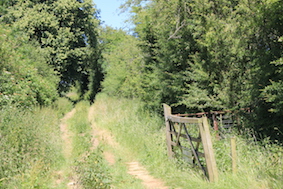 On emerging again, it crosses through another gate, leaving the water & heading back towards the road once more – it was so hot the sheep didn’t want to move! 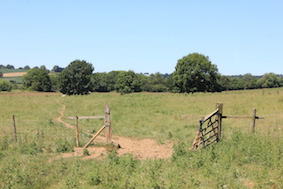 15. We exit by the gate back onto the road again & carefully retrace our steps back to Guilsborough where we started this walk

So that’s it…a beautiful short walk round a lovely place, but don’t forget to buy your permit first