Time to walk: A good couple of hours, but hey guys… this is paddling time….

Difficulty: The climb at the start & descent towards the caravan site is very steep

Parking: Park at Rhossili – it’s free if you’re National Trust Members as we are

Public toilets: In the pub at the car park, or at the holiday camp

This walk’s been voted as one of the Top 10 in the UK in The Guardian. The Gower has always been one of our favourite places to walk. Despite three quarters of a million people visiting Rhossilli annually, this walk feels isolated & it’s there just for you.  The beacon at the top of Rhossili Down, after a bit of a climb at the start, never fails to take your breath away; both the beauty of the views & steepness of the incline

Here you can see Worms Head & Burry Holmes tidal islands which reach out their arms into the sea & appear to cuddle the beach spreading out three miles underneath you. The uninterrupted 360-degree views encapsulate the whole of the Gower’s fabulous topography. The commons also boast prehistoric stone circles, cairns & burial chambers

It’s possible to see Devon in the distance in one direction & Swansea in the other. Lie down in the heather up here and look at the clouds, all you will be able to hear are the sound of skylark. Bring some binoculars & a flask of tea which should give you a great excuse to sit down & enjoy the surroundings

1. Park in the grass field in Rhossili, which is free to National Trust members. This whole area of coastline is owned by the Trust. Exit onto the road & turn right.. 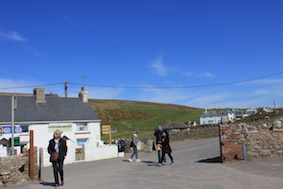 Look at what a beautiful day it was

Continue to climb up through the village & soon, on the left, we get our first view of the stunning Rhossili Beach

2. Paddling will come later, but before that we’ve some serious climbing to do. Keep straight ahead &, where the road bends right, head left towards the hills. You can see the path up the cliff ahead 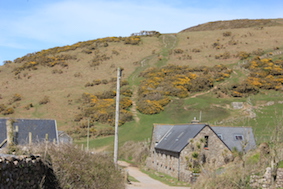 Pass through the gate…

…& it’s time to climb. For those of a less fit disposition, take your time, stop & admire the views behind you as you walk 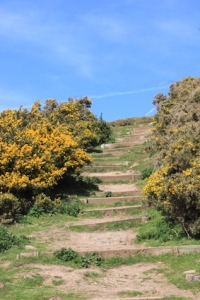 3. It is quite a strenuous pull up here, but the views keep getting better & better including our first proper look at Worms Head…

Ready to dip your toes?

4. Just when you think you’ve reached the top, there’s a plateau & then quite another steep climb before the beacon at the highest point can finally be seen…

So head down & crack on as it’ll all be downhill from there (if only!). Only joking…the beacon is a special point with amazing views in all directions including back inland 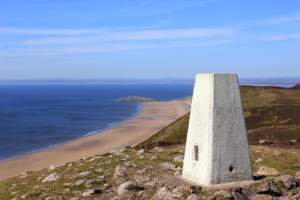 5. For us though the best part of the walk is yet to come & our feet need a paddle so let’s crack on! The path’s now well defined & we’re following the signs to the village of the appropriately named Hillend

6. Look down & to the left to see the remains of a World War II Radar Station. From this position the radar station was able to send early warnings to Swansea of approaching enemy planes

It’s also from here we get our first view of the dunes at the far end of the beach which are called the Warren. There was once a church & houses here dating back to before Norman times before they were abandoned & buried in the sand

7. We’re now going to descend from the hills & would recommend taking your time as it’s very steep &, when wet, could be slippery (note Bon Jovi reference) 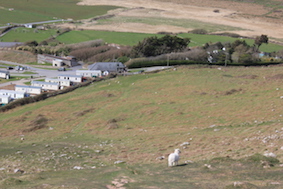 8. Turn right at the end of the building & follow the road down to the car park besides the dunes 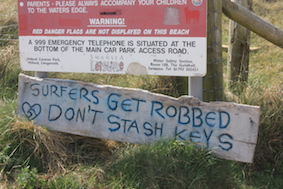 9. Pass along the boardwalk through the dunes onto the beach…

10. Rhossili Bay was awarded the 3rd best beach in Europe & 9th best in the world! Rhossili has also been described as ‘The supermodel of British beaches’ by The Independent & has also won accolades from UK Travel Writers & awards for being the best spot to have a picnic! And not forgetting our four legged friends, The Times nominated Rhossili as ‘The UK’s No.1 dog-friendly beach’

11. Follow the beach towards Worms Head. We took the opportunity of some black & white photography along here

On the left’s a solitary large house, called the Old Rectory that’s owned by The National Trust & can be rented out

12. The steep path up from the beach can now be seen at the far end… 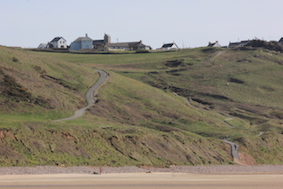 …&, as the tide was coming in, we were now sharing the beach with people hoping to catch their dinners 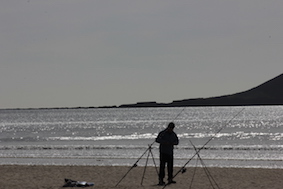 Plus some others who…well we weren’t quite sure! 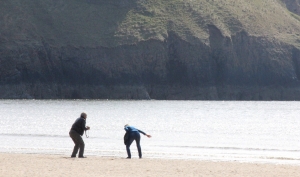 13. Before we leave the beach have a look at one of its most famous features…the wreck of the Helvetia…

The ocean-stripped oak carcass of the Helvetia shipwreck must be one of the most photographed of objects on the Gower Peninsula. Each day, the mighty Atlantic Ocean continues to feed upon the wreck. In only the last decade or so, the wreckage has reduced considerably

On the evening of the 31st October 1887 the Helvetia arrived off the coast at Mumbles on its journey from Campbelton (New Brunswick) to Swansea & moored up to await a pilot. However, due to the adverse weather conditions, the Bristol Channel proved too rough to navigate to Swansea harbour. By eight o’clock the following morning the wind had strengthened considerably & was reaching gale force levels. The Helvetia now found herself perilously close to the infamous Helwick sand bank off Mumbles. As the wind grew stronger still she was driven across the bank, losing a substantial part of her deck load in the process. Fortunately the crew were able to keep the ship from further damage & rode the waves around Worms Head & into the relative shelter of Rhossili Bay. Here they were were able to drop anchor & wait for the weather to improve.The ships captain even went ashore along with the local coastguard believing that all was well

Unfortunately mother nature is rarely predictable. A few hours later the wind suddenly changed direction & strengthened, ripping the anchor free of the sands & driving the Helvetia perilously close to Rhossili beach. With a heavy heart the order was given to abandon ship with all of the crew making it safely ashore

The next day the sands of Rhossili were strewn with the remains of the 500 tonnes of timber cargo that had formerly resided aboard the Helvetia. The ship herself was stranded where she has now lain for the past 122 years. The wood was quickly gathered & sold on to local merchants, while the Helvetia was unceremoniously stripped of anything that had any value

14. It’s time to leave the beach so head up the path…rope on! 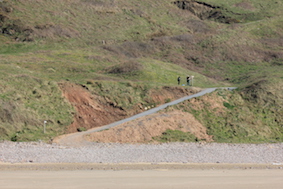 15. Emerge through the small alleyway back out near the carpark & turn right. If you fancy a drink or snack before walking down the peninsular the Worm’s Head Hotel & Restaurant will oblige…

Their website suggests they have a beer garden with one of the best views in the UK. Who are we to argue…

16. The well-marked track to Worms Head peninsular is flat, easy, but also spectacular walking with views over the steep cliffs where the sheep hang on for grim death

Historically named ‘Wurm’ meaning ‘dragon’ by Viking invaders, Worm’s Head, is shaped like a giant sea-serpent & marks the most westerly tip of Gower. The island is joined to the mainland by a rocky causeway & features an large flat-topped ‘Inner Head’, towards a natural rock bridge called ‘Devil’s Bridge’, a ‘Low Neck’ leading further out to the ‘Outer Head’. The headland is one mile long & the highest point is approximately 150 feet

17. Continue up the grassy slope to the hut at the top…

The rocky, jagged causeway leading out to the ‘Worm’ is only exposed for two & a half hours before & after low tide, so walkers should always carefully check the tide times before they set off over the causeway. Being trapped on Worm’s Head for half the day, waiting for low tide again, is both inconvenient & desolate to say the least, but so easily done by the inexperienced. Today we were too late as the tide was rushing in

You can see the causeway’s disappeared

Even the young Dylan Thomas made the mistake of falling asleep on the Inner Head and missing his tide:

“I stayed on that Worm from dusk to midnight, sitting on that top grass, frightened to go further in because of the rats and because of things I am ashamed to be frightened of. Then the tips of the reef began to poke out of the water and, perilously, I climbed along them to the shore” 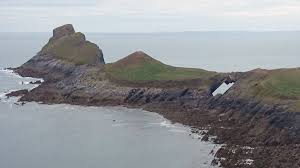 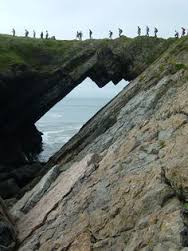 Next time we’ll definitely co-ordinate our walk with the tides as this looks pretty exciting! For today though we can’t go any further so it’s back to the car park & start of our walk. It’s still worth taking the time to peer over the edge of the steep drops

So that’s the end of a beautiful &, at times, quite strenuous walk. Did we think it rates as highly as The Guardian thinks i.e. one of the Top 10 in the UK?

Well we’d certainly put it in our Top 10 ‘Beach’ Walks, but at heart we’re hill & wild mountain walkers so we’ll leave you to make your minds up