Time to walk: You could probably walk this non stop in 30 mins, but there’s quite a bit of history to stop & look at & coffee shops to visit etc

Difficulty: All on hard paths

Parking: We parked on road off Cemetery Lane

Map of the route: None, but all of the walk is centred around the High Street so it’s really easy to follow

So what can we tell you about Higham Ferrers, which we visited on a cold sunny day in February 2014? Well firstly, courtesy of East Northants Council, it has an excellent Heritage Trail which we used for the basis of our walk

It originally was an Anglo Saxon settlement known as ‘Hecham’ meaning an important enclosure high on a hill. The Romans also settled here

The first Charter was granted in 1251. The then Lord of the Manor, William de Ferrers, created the Borough which was a prosperous community

Today Higham Ferrers is a mix of new & old properties & always worth a visit. Many of the old buildings refer back to Henry Chichele who was born in the town & later became Archbishop of Canterbury – we’ll refer to him several times along the walk.

So…let’s pick up on the history as we go along. Come on…

1. We parked up just off Cemetery Lane & head further along it where on the left we come across The Saffron Moat.

The Saffron Moat is known locally as ‘the cup & saucer’. Water was supplied to it by a spring. The moat measures approximately 35m x 44m, & is surrounded by a ditch up to 2m deep & 4m wide 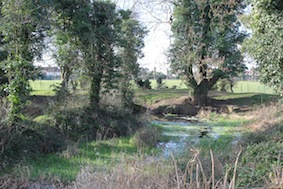 The moat derived its name from the fields it was originally situated in, once called Saffron Close. The Canons of the nearby college grew crocuses in these fields & sold the saffron derived from them, hence the name

2. Head back along Cemetery Road passing the cemetery on the left heading towards the main road through the town which at this stage is called College Street 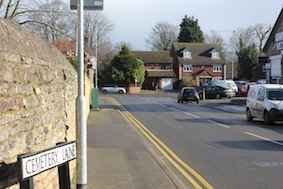 We’ll turn right when we come to the T junction

3. On turning right we head towards the centre of the town & get our first glimpse of the church spire that can be seen from virtually everywhere

4. When we visited The Saffron Moat we mentioned that it probably supplied fish to the local college. So the next place we come to on the right is Chichele College

The English Heritage link above gives more details, but it was established in 1422 by Henry Chichele. Taken from the ENC leaflet, the college once provided accommodation for 8 canons, 4 clerks, 6 choristers, a song master & a grammar master

The college fell into disrepair following the dissolution of monasteries by Henry VIII. In 1542, following dissolution, it became an inn & then later a farm

Then turn right up the alleyway just past the college…

The shell of the outer wall we saw from the street 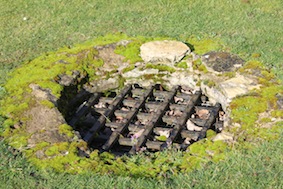 5. Right come on let’s move….head back out towards the main road where there’s more lovely old properties… 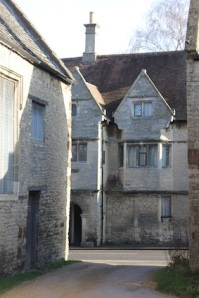 …again we turn right, but over the road is an important building…The Green Dragon Inn

This 17th century coaching inn was a stop off on the route to London. Let’s walk through the archway to have a look at the stables & much more…

6. There’s another purpose for us coming through the inn courtyard. In the car park turn left & walk towards the green area below 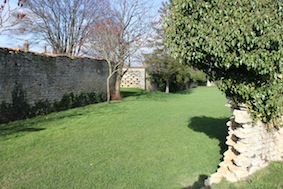 This is the site of what once was Higham Castle, which was built in the 12th century & demolished in 1523.

It was one of the baronial castles built shortly after the Conquest, probably by one of the two Peverels. Little is known of its history.

A map of the castle

The main feature of this site though remains the impressive Dovecot… 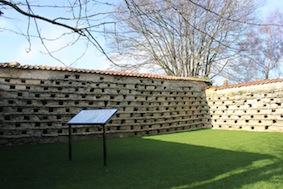 Who knew this was here? Impressive!!

This dovecot probably dates from the 17th century. It’s a great find & Northamptonshire never fails to throw up new treasures!!

7. As the pub’s not yet open we head back through the courtyard & continue along the main street which now becomes the High Street & enter a beautiful market square 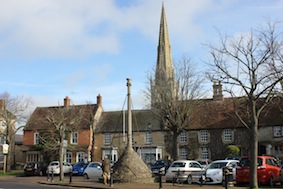 8. Ok let’s have a look around…firstly on the left is The Church House 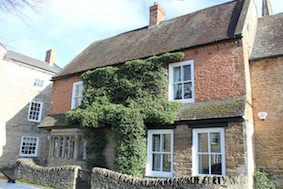 9. If we wanted to we could turn up the alley & visit the church, but we’ll save that until later 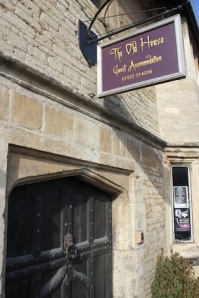 10. On the right hand side is the old Town Hall… 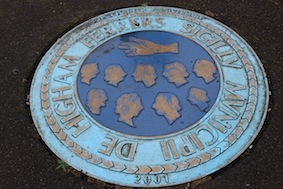 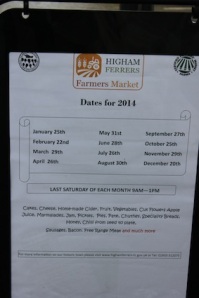 11. Behind the Town Hall is one of Higham Ferrers’ longest standing bars/restaurants…The Carriage House – can’t believe it doesn’t have its own website

12. We continue along the High Street again… 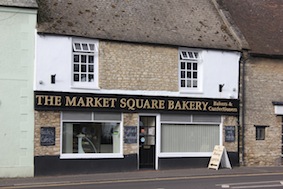 They do superb filled rolls if you’re peckish

13. We’ll cover the buildings on the left hand side of the High Street first & it’s good to see that traditional shops are still alive here…

…& if you’re now ready for a break try The Griffin 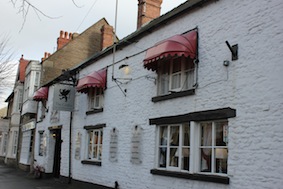 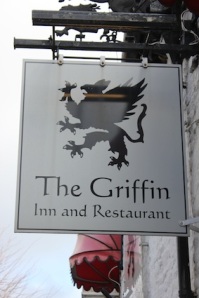 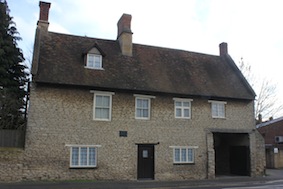 …which is believed to be the birthplace of Henry Chichele. If you ever visit Canterbury Cathedral tip your hat to him as he’s buried there

15. Cross over the High Street & head up back the other side… 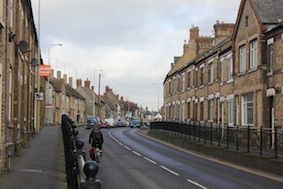 16. We had a great chat with a few locals around here & it was clear that they’re all very proud of their town. There’s more local, individual businesses on this side too… 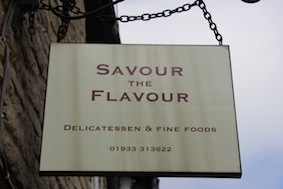 Well at least you know when we walked around here 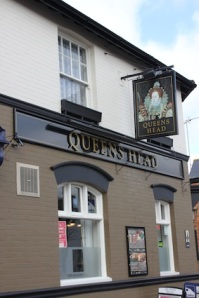 Or a light refreshment? 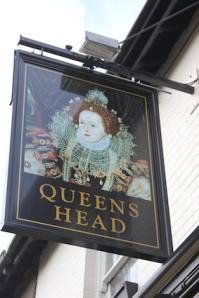 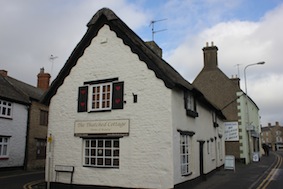 17. It’s time now to have a look at the church whose spire’s been stalking us all around this town. Walk down the alleyway at the side of The Church House & through the gates of the church

18. This is an incredible area of history. Firstly let’s tackle the church which unfortunately today was closed… St Mary’s The spire is around 170 feet &, as we can’t get inside it’s well worth spending some time looking at the incredible carvings around the front door 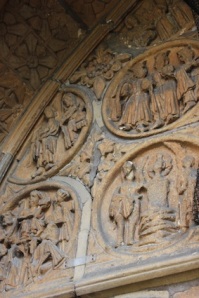 19. On the left in front of the church is The Chantry Chapel – another listed building

This building looks very like King’s Chapel at Cambridge which we visited on an earlier walk. On a recent visit we were lucky to be shown around the inside…

The Chantry Chapel was built in the 15th Century as a Grammar School by Archbishop Chichele The exact date of the building is unknown, but it was endowed in 1422 & was certainly complete by 1463. It remained in use as a school until 1907 when there were 23 pupils. The school was inspected in that year & found unsatisfactory in both the teaching & the facilities and was then abandoned as a school

We were told a story about the small door that leads to the alcove higher up on the wall. One theory is that the ‘Master’ would stand up here watching over his pupils working! Another though is that the Master used to live on-site & there was a suspended floor & his living quarters were upstairs

It was sold to the church in 1911 for £200 & converted into a Chantry Chapel. In the 1940’s it was restored by the generosity of John White, the shoe manufacturer who, with his wife, is now interred in the chapel

This building was founded by Henry Chichele for 12 poor men & a femaile housekeeper to live in. They were given one penny per day & in return had to live by a strict regime of prayer

As above, we were also lucky to visit the inside on a later visit….

They lived together in an open hall with each man having his own little cubicle or locker, some of which are still there…

The rest of the room was a large open space with a large fireplace & what a fireplace!

Chichele provided that each old man and woman should have one penny per day, this being at the time that a workman earned no more than a shilling a week, and the Bedesmans silver penny was in real terms worth more than a modern old age pension. He could afford to buy meat for his Sunday dinner with enough to be put aside to be ‘powdered up against Wednesday’ by the Bedswoman

The Hall is still used today &, if you do manage to get inside, don’t miss the fantastic collages…

Well that’s our short town walk around Higham Ferrers. We used to live quite close to here, but it’s not until you spend time researching & walking that you realise the history of places like this

There’s so much more to it than meets the eye