Difficulty: Easy, flat walking. It’s really dog friendly apart from one high stile which you will have to lift large dogs over, & from the village green where they must be kept off. There are several stiles

Parking: On the street in Coultard Close, Towcester NN12 7BA. Note that all the streets around there are names after famous racing drivers!

This walk was “legged” for me by Richard Parkes & starts & finishes in the remarkable hamlet of Hulcote.

Where is Hulcote you might ask? Well it’s part of the Easton Neston Estate near Towcester. You’ve probably passed the gates to the House many times but never visited the Estate hamlet

The village of Hulcote is tucked away up a quiet no-though-road. At the end of the road are just eight cottages on two sides of a large green. Their chequered brick & Gothic windows date to the early 19th century, maybe a hundred years later than Easton Neston itself. Their pointed windows & general ecclesiastical look have gained the place the local nickname of the ‘Chapel Village’. They look quite spacious too, a gesture of generosity, perhaps, on the part of the third Earl of Pomfret, who had them built in this distinctive style

Look closely at the houses…something about some of their windows isn’t quite right…yes, they’re painted on the brickwork. The reason is Window tax was a property tax based on the number of windows in a house

It was a significant social, cultural, & architectural force in England, France, & Ireland during the 18th & 19th centuries. To avoid the tax some houses from the period can be seen to have bricked-up window-spaces. In England and Wales it was introduced in 1696 & was repealed 155 years later, in 1851

1. Before reaching Hulcote, we parked carefully in Coultard Close opposite the play park & made our way to Northampton Road up the Bridleway opposite the park & across the road.

Walk through the small arch….

…make your way through the woodland area, The big gates take you up to the private Easton Neston House & also the church which you can visit when services are held

2. Sadly on this walk you’re not going to be able to get a close up view of Easton Neston House so we’ll have to give you a couple of stock photos…

Easton Neston was built by William Fermor, 1st Baron Leominster (1648–1711) & is thought to be the only mansion which was solely the work of Hawksmoor. From about 1700, after the completion of Easton Neston

For many years it was the home of Lord Hesketh & his family, sponsor of F1 driver James Hunt. In July 2005 Lord Hesketh sold the property to a Russian born fashion designer for around £15 million

4. Turn immediately right & follow the road in front of the houses…

5. I’ve done plenty of walks and I have to say this field is one of my favourites. It’s huge & absolutely beautiful. Even in the winter months it was quite easy to walk through…

Keeping to the edge with the hedgerows on your right, we continue to the very far end & the big metal gate. I loved this field so much we will even walk back through it on the return to the car…

6. After the big gate turn left up the bridleway, over the Ford, or even through it on a nice summers day!

For those that have walked the Stoke Bruene Circular Walk 10, you will now be familiar with this track, although we are walking it in the opposite direction.

Just keep walking to the gate which is quite a trek up hill &, pass through the railway tunnel, above which is the old disused railway line…

The railway line above your head was part of the dismantled Stratford-upon-Avon and Midland Junction Railway (SMJR), which runs east to west between Showsley & north of Hulcote, towards Towcester Station, now the site of a Tesco supermarket. The line ran from Towcester to Stoke Bruerne, then east, crossing over the West Coast Main Line and then on into Bedfordshire. The line was opened in 1891 & it joined the line from Blisworth to Towcester just north of what is now the roundabout at the junction of the A5 & A43 near Towcester

7. This really is a beautiful area, & so quiet… 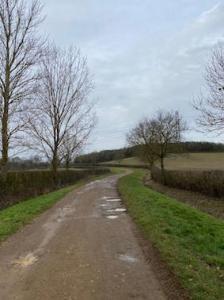 At the gate, don’t cross the road. Turn right & follow it… 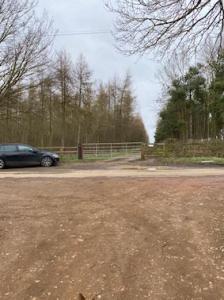 There are actually on 4 houses in the village, 3 of which are near the A43 which we won’t see, & the farm house we will pass shortly.

In Showsley there are the remains of a 12th century Cistercian Priory (known as “Sewardsley” Priory). The area was explored by Channel 4’s archaeological television programme “Time Team” in 2007 & the episode about the dig first screened on 27 January 2008

The dig found the priory church, about 90 feet by 20 feet in size & the cloister measuring about 45 feet square. There were some striking floor tiles decorated with images of a dog & others with a flower & large amounts of pottery. The team also looked at what was thought to have been an antiquarian garden feature. This was found to be actually graves, complete with the remains of the people who had been buried there. Two were of particular interest. These had not been cut together, but were finished off together, suggesting that their occupants were connected in some way

9. Follow the road round & up the hill. This beautiful little lane takes us into the village of Shutlanger…

Continue along the road all the way into the village…Welcome to Shutlanger!

Shutlanger was in 1086 also known as ‘Shitelhanger’, meaning ‘Wooded slope where shuttles or wooden bars are obtained’. In Olde English it was also called ‘Scytel Hangra’

The village is small, showing 290 people at the time of the 2011 census. There was once a great medieval house here called ‘The Monastery’, but it was just a house & not a monastery in the normal sense. The village is close to Stoke Park Pavilions & originally part of the Stoke Park Estate with the first Palladian-style English Country House. Famous residents includes ancestors of the Richardson Gang

Dave writing now 😉. I’ve done lots of walks around the East End of London (check out my Walks outside Northamptonshire tab) & have always been fascinated by the history of Gangland so I’ve come across the Richardson Gang many times..really ruthless opponents of the Krays. They included George Cornwell who Ronnie shot dead in the Blind Beggar. I’ve sat in George’s seat on one of my walks. Check this link

10. Continue down the road into the heart of the village &, at the first & second forks, just keep heading straight down the hill slightly right to the main road…

11. Now bear right & head back towards Hulcote. On the left is the Plough Inn for a little refreshment & toilet break if you need it. The village pub also has a shop attached to it. Such a good idea!

12. Suitably refreshed turn right & head out of the village away from the pub back towards Hulcote, We’re looking for the footpath sign on the right. (be careful this is a busy road but there’s plenty of room either side to keep on the verge…

13. Climb over the stile & keep straight ahead with the stream on your right through two fields… 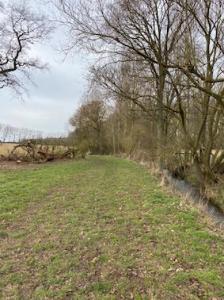 14. Walk over the bridge & re-enter the field from earlier through the big metal gate. Now retrace your footsteps back into the village…

15. As we re-enter the village turn immediately right down the hill to the fence & then left along the lane…. 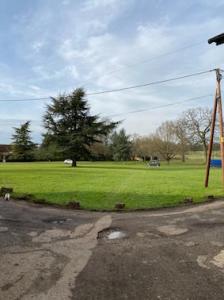 16. At the bottom of the road simply turn left & follow the road out of the village. There are plenty of picture opportunities on the village green though!

17. As the road bends to the right, turn left & follow the driveway as it runs across some of the back gardens….

18. Keep following the road until you reach the footpath sign on the right, Cross the stile & walk across the field following the way markers….

19. Cross over two more stiles & walk back through the woods. Cross the old Northampton Road & continue down the bridleway to where you’ve left your car in Coultard Close

This has been one of those walks where you don’t need words or pictures to follow as its very simple but extremely quiet, peaceful & beautiful & one I will be doing over & over again!