Time to walk: Roughly 3 hours 20 minutes on 29th July 2020, which included a stop for coffee in Staverton

Difficulty: A mixture of field, woodland tracks & bridlepaths. This is a hilly part of Northamptonshire, but nothing too steep

Parking: As this is a linear walk, the ladies parked their cars in both Charwelton & Braunston

Ann, Helen, Sally & Sarah tell us that Section 3 was their favourite part of the Jurassic Way so far due to the pretty, secluded villages, open fields, the viaduct & the lovely canal at the end. The good news is they also found this section well sign-posted

Shall we see how they got on?

1. The route starts in Charwelton on the opposite side of the road to the packhorse bridge where the ladies finished Section 2. The village is mentioned in the Doomsday Book as “Cerweltone”

They approached Charwelton House along a drive for a while, but the path then veers to the right across fields & heads north towards a road. Apparently the River Cherwell had its source in the cellar of the original house on the site, but it now starts from a fishpond at Cherwell Farm. The River Cherwell is the second largest tributary of the River Thames. Rising near here it flows 40 miles to meet the Thames at Oxford

2. The path quickly meets a minor road (above). Ignore the first footpath which is directly opposite. Instead turn left & walk a short way to a second path which takes you over cultivated fields – do not cross the disused railway that stays on your right

When the ladies did this walk the farmer had made a clear path for them through the crop. The large radio mast was kept to their left & behind them at all times as they made their way to Hellidon…

From time to time they had to peel their eyes to find the path markers, but they were there!

3. In the picture below you can see that there was no clear path, but they figured that it lay ahead & over the hill (with the mast behind them) & it did! 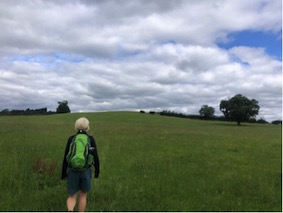 The ladies kept going until they passed through the gate below, at which point they could see Hellidon ahead & below them… 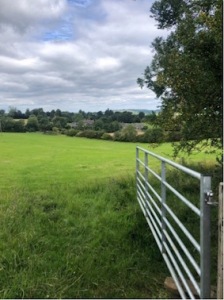 4. What a way to arrive at Hellidon…the path exits the field at…the pub! The charming stone-built Red Lion re-opened on May 10th 2019, after a two year closure during which it was subject to a most extensive & high quality renovation & totally remodelled inside. It’s popular with walkers & horse riders. The pub also has six accommodation rooms…

5. The path now takes you right through the village of Hellidon, which is very beautiful & quiet. The Domesday Book doesn’t record Hellidon. In the 12th century a manor at “Eliden” was recorded &, from the 13th century, it had two manors: Baskervilles & Giffords. The present manor house at the north-west end of the village is on the site of the former Baskervilles Manor. Giffords Manor was on the north-east side of the village

They followed Stockwell Lane & wanted to explore the Church of St John the Baptist but, as there was a funeral taking place, the ladies moved on 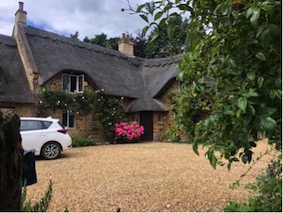 6. When the ladies reached the end of the village (below) they tell us that you need to follow the signs for Lower Catesby (gated road), which leaves the village to the right. They think the Jurassic Way sign was there too… 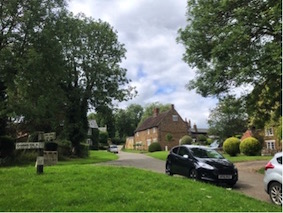 7. This next section to Lower Catesby was gorgeous & a straight road…

Lower Catesby is also mentioned in the Doomsday Book of 1086. It consists of quite a few grand houses, non of which date back earlier than the 17th century. One was probably a former coach house to the manor. It used to be much bigger & the surrounding humps & hollows show where the previous houses once stood

Other earthworks, which they didn’t see, are those of an old priory. Robert de Esseby founded a priory of Cistercian nuns at Lower Catesby in about 1175. In the 1230s Edmund Rich, Archbishop of Canterbury, committed his sisters Margaret & Alice to be nuns at the priory. Edmund was canonised in 1247, Margaret was elected prioress in 1245 & she served until her death in 1257

In 1535 Parliament passed the Suppression of Religious Houses Act 1535. Thomas Cromwell‘s commissioners inspected the priory in September 1535 & May 1536, & reported that the prioress & her nine nuns were of “good faith & blameless character”

Henry VIII nonetheless ordered the commissioners to suppress the priory, which they did before the end of 1536. The last prioress was pensioned off, her nuns & dependents were evicted, all the priory’s furnishings were seized, its hand-bells were scrapped, & the lead from the roofs of the priory church and buildings was taken & sold for scrap

8. On the right in the distance, our walkers could make out Catesby House (below)…

In 1894 the house was enlarged. A long, rectangular formal pond survives from the gardens of the old Catesby House

9. After the houses end, the path heads off across fields to the right. To your left you will be able to see Napton on the Hill

After crossing several fields, some with cows, you’ll catch glimpse of Catesby Viaduct (spanning the River Leam & part of the Great Central Railway) in the distance to your left. It was really impressive & none of the ladies knew it existed… 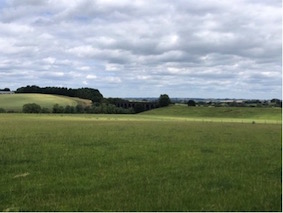 You will eventually pass “under” the railway. They say “under”, because it had been a bridge, but it’s now open to the sky

10. The path now runs fairly straight through many fields, over streams, which were beautiful when they passed through, until you reach the village of Staverton… 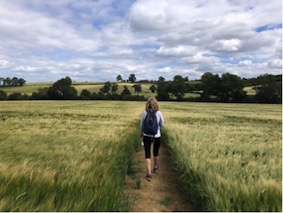 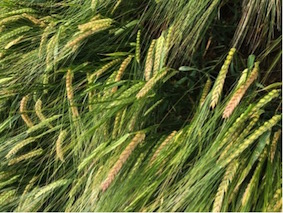 11. The last part is a bit of a climb. You pass Bates farm on your right just before you enter the village, crossing the A425

Our walkers stopped at the pub (The Countryman) for a coffee & a rest. Setting off again, keeping the pub on your left they take the road into the village itself

There is a lovely way marker for the Jurassic Way on ‘The Green’ reminding them that they still have 66 miles to go before Stamford & that they had now walked 22 miles from Banbury. They had reached the quarter way point….

12. From the Green, Ann, Helen, Sarah & Sally walked down Oakham Lane, turning right into Braunston Lane & following this until it becomes a bridleway. There are lots of lovely houses in Staverton as well…

The name Staverton means “staved town”. In the Domesday Book Staverton is mentioned as “Stavertone”

Before the early part of the 18th century, the original village was located behind the church. However, in 1720 a fire broke out which caused damage, destroying many haystacks, stables, grain stores & 22 houses. The total loss was thought to be around £3,000. The result of this was that the village received, via a bequest from Elizabeth Darby, a fire engine. This came into commission in 1767, was kept in the village until quite recently & was later housed at the Daventry Museum

13. The path is straight & easy to follow from Staverton. Keep going until the bridleway bends sharply to the right. where you now need to turn left  & walk  diagonally through a (at that time maize) a field towards Braunston Covert

In the picture below you can see where the road bends right & you need to go left. The covert is in the distance…

Continue through some shrubs & trees as you approach the covert, but don’t pass through it. Keep it on your left….

14. After the covert drop down to cross over the busy A45. The waymarker is easy to spot on the opposite side of the road. The path now continues over the fields as you approach Braunston village. Look out for the old windmill – you can’t miss it…it’s orange! 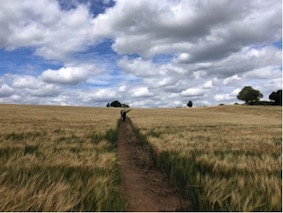 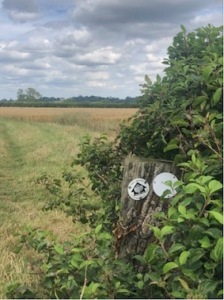 15. The last section of the day is along the canal & you’ll arrive at the Admiral Nelson pub…

If you’re not stopping for a drink keep on the side of the canal where you arrived & turn left. After short walk you find yourself at the marina having passed through the locks

Braunston is a canal intersection for the Oxford & the Grand Union canal, which led to major growth of the village 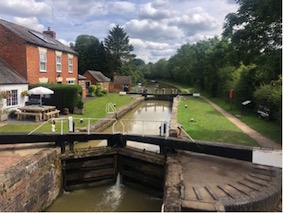 At the bridge (which you stand on to take the above photo!), cross over & follow the path up to the village via the pocket park. The path continues on the other side of the main village street, but that is for another day. Great walk today & a lovely varied section of the Jurassic Way

Thanks Ladies – that looks fab so…