Walk 85: Rockingham Village: Up the hill & back down again…

Difficulty: All on hard paths

Parking: Roadside in the village

Rockingham’s another of Northamptonshire’s jewels, being one of its most picturesque villages laying on the edge of the beautiful Welland Valley. Situated just north of Corby & close to the border with Leicestershire & Rutland, most people just drive through it so we thought we’d stop on the way back from our Harringworth viaduct walk & have a look round

There are signs that there was a village here in Iron Age & Saxon times, but it was the Romans that built the road through it that gave it much of the structure & identity it has today. The castle which looms over Rockingham was built by William the Conqueror &, in those days, the houses probably centred around it

Rockingham suffered badly in the English Civil War, but Edward Watson, the 2nd Lord Rockingham led the rebuilding project using local stone & slates from Collyweston. There were further amendments but very little has changed over the years

1. We parked up in the lay-by next to the Grade II listed red telephone box… 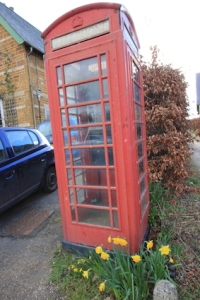 Now the choice is your as whether to walk up or down first & on which side of the road. We chose to keep on the telephone box side & walk up the hill

Slightly further on is the site of one of the three water pumps that used to serve the village. The water came from springs on the higher ground

3. The final house on this side is set back from the road & is the Old Rectory which we didn’t get a picture of. To visit the Castle it’s probably best to take the car as the main entrance is at the top of the steep Rockingham hill. It wasn’t open when we were there…

Rockingham Castle is a former royal castle & hunting lodge. William the Conqueror ordered the construction of a wooden Motte & Bailey. Within three decades, William II replaced it with a stone castle. It was then used as a Royal retreat throughout the Norman & Plantagenet periods. Nearby Rockingham Forest was especially good for hunting wild boar & deer. In 1270 Henry III strengthened the castle with the addition of a twin D-tower gatehouse, but less than a century later Edward III became the last monarch to visit the castle while it was possessed by The Crown. By the late 15th century Rockingham Castle had fallen into disrepair. Sir Edward Watson (founder of the Watson Family dynasty) acquired the lease of the castle from Henry VIII. Parts of the castle were subsequently replaced with a Tudor house with gardens. The former royal castle became a hunting lodge for the nobility. Watson’s grandson Lewis Watson acquired the freehold of the castle & lands from the crown. Watson was successively a knight, baronet and baron

In the 1640s Rockingham was garrisoned by troops loyal to Charles I during the English Civil War. Several small skirmishes were fought with Parliamentary forces. In 1643 Rockingham was captured by Parliamentarian general Henry Grey, 1st Earl of Stamford & Lewis Watson temporarily forced to leave. Its remaining walls were slighted in 1646. In the latter 17th and 18th centuries, Rockingham returned to being a civil residence.

Lewis’ grandson, also Lewis, was created Earl of Rockingham in 1714, a barony that was extinguished with the death of the 3rd baron in 1746. The estate then passed to his cousin Thomas Watson-Wentworth, who was created the 1st Marquess Rockingham later that year. When Charles Watson-Wentworth, 2nd Marquess of Rockingham died in 1782, the estate among others passed to the son of his sister, William Fitzwilliam, 4th Earl Fitzwilliam. The castle underwent further restoration in the late 19th century.

4. Cross over the road to come down the other side. Ahead’s The Old Forge… 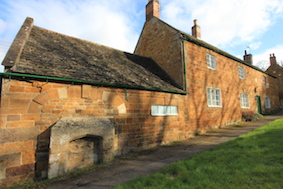 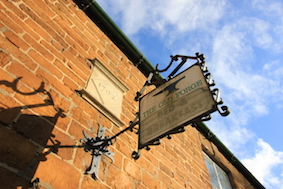 No. 18 is probably the oldest house in the village. It gives an impression of what the earlier houses might have looked like

5. Come back out & carry on down the street…

6. No.8’s an interesting property as it has a Norman Head embedded in its walls – what’s that about? 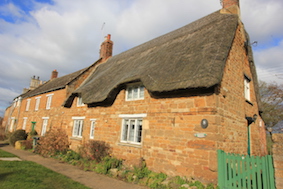 7. Carrying on 8a & 8b used to be a baker’s & butcher’s respectively until the 1950s. 8a’s windows were probably altered for the baker’s shop front. The butcher slaughtered cattle at the back of the house & sold the meat from the front room 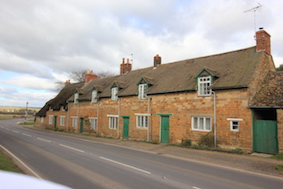 Keep heading down the main street…

Watch out for the St Bernard along here. We met him & his barks worse than his bite – gorgeous dog

8.Castle Farmhouse, the largest farmhouse in the village, is an example of a traditional hall-and-cross wings U shaped house. It has a Collyweston slate roof with unleaded lace valleys to the wings & stone mullioned windows. Its date stone reads ‘READ 1674’, a Latin contraction of ‘REAEDIFICATUM’ meaning ‘Rebuilt’.

9. We’ve missed out several properties but’s it’s a small place so about turn & now walk back up the hill. So now we put on a longer lens for a few different perspective photos…

Gorgeous picture of the castle & the Sondes Arms

10. Just before we get to the Sondes Arms , in the courtyard on the right’s the Village Shop & Tea Room… 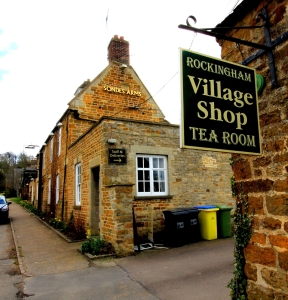 11. The Sondes Arms is a very well known Northamptonshire pub & restaurant which has been in these parts since 1677 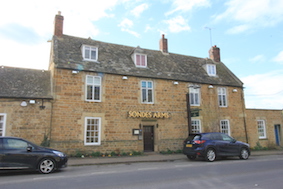 Next door’s the Market Cross erected when Queen Elizabeth I reissued Rockingham’s market charter in 1600. It was rebuilt in 1894

There we are, back where we started. This isn’t a walk, it’s more of a stroll, probably something to be done after a lunchtime meal at the Sondes Arms

Rockingham is a beautiful village