Time to walk: At a leisurely stroll this will take around 1.5 hours

Difficulty: A mixture of hard paths & some grassy fields. We did this walk in early May 2018 after rain & some parts were slightly muddy, but not impassable

Parking: We parked on the street in Creswell village

This is a walk that was recommended to us whilst working near Worksop in Nottinghamshire in May 2018. It straddles the Derbyshire / Nottinghamshire border & takes in the impressive limestone gorge of Creswell Crags, where the caves were used by Ice Age hunters as a seasonal game camp over 43,000 years ago

The hunters came in search of mammoth, bison & reindeer that roamed the area & archeologists have found fossil animal bones & tools left behind. Art dating back 12,000 years has been found in some of the caves

Ready to get ‘Cave Man’?

1. Todays walk starts in the small, former Derbyshire mining village of Creswell which, at the time of the Domesday Book, was a collection of farming houses until the construction of a turnpike road along the present A616 brought added importance. The arrival of the coal mining industry in the last decade of the 19th century had a dramatic effect on the area & Creswell became the larger community

Creswell expanded throughout the 20th century after a lease was obtained from the Duke of Portland in 1894 for the top hard seam of coal in the area & Creswell Colliery came into being. The Bolsover Colliery Company owned the pit until it was nationalised in 1947. Creswell Colliery was regarded as one of the most efficient pits in the East Midlands coalfield & was known for its sporting & social activities, & Creswell Colliery Band was for a long time one of the country’s leading brass bands & was broadcast several times on BBC Radio

On 26 September 1950, during the early hours of the morning, a damaged conveyor belt caught in a machine at the colliery & caused the motor to overheat & catch fire trapping 80 men beyond the flames. They all perished as a result of the fumes & smoke. As word of the disaster spread, Creswell residents rushed to the pithead to offer assistance. One miner, who had broken his back several months before, went down the stricken pit, with a back brace on, to try to rescue his fellow workers

Serious errors prevented the fire from being extinguished quickly & only 57 bodies were initially recovered & 23 remained underground for the best part of a year. The fire was finally put out after the entire colliery had been sealed to starve it of oxygen & it did not reopen until Easter 1951 when most of the remaining bodies were recovered. The last three victims were recovered on 11 August 1951 nearly eleven months after the fire

The local landscape had been very beautiful, but during the 20th century it was scarred by a century of mining with the black, spoil tips of unwanted debris from miles underground, with the air-born pollution from the pit chimneys always belching out smoke, scarred by poor architecture & housing

3. We’re going to follow this track for the next half mile or so & watch your step as it’s obviously used by the horse riders. There’s a very old wall either side of the track which means that it’s obviously been used as a route for many years – it reminded us somewhat of the ‘Coffin Route’ in the Lake District. It was also good to see the early bluebells

It really is quite pleasant walking. On the left are constant reminders to not cross the fence as there’s a quarry nearby

4. Eventually the track arrives at a small, but very busy small road so exercise care…

Exit onto the road & turn left following it past the junction

5. We’d seen a large chimney for miles around & it forms part of the quarry works…

This is Whitwell Quarry. There’s been a limestone quarry at Whitwell since 1958. It’s an important source of construction materials in North Derbyshire & North Nottinghamshire markets & is one of the few sites in the UK to supply a special industrial grade of limestone which is vital for steelmaking

This industrial limestone, which is also used to manufacture heat resistant bricks for high temperature industrial applications, is processed in rotary kilns at Whitwell that are operated by a separate company. Limestone from the quarry is used on site for the production of ready-mixed concrete. Agricultural lime is supplied to the farming industry & sinter is produced for steelmaking

The quarry currently processes nearly a million tonnes of stone every year & the site, across all its activities, supports more than 220 jobs & makes a contribution to the local economy of over £6 million a year

6. After the quarry the road reaches a T-Junction where we turn right along Millash Lane, under the bridge

After a bad winter & early spring, it was good to see the flowers beginning to emerge once more

7. Just before the cottages look for a footpath through a gate on the right into a field

The hill directly ahead, where the path used to go, is known as Belph Spoil & forms some of the discarded material from the old coal mine. Today it’s fenced off, but the new path is well marked between the wire fences

There was more evidence of the late spring along here… 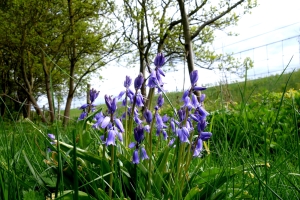 8. The path turns right & then climbs the hill between hedges before opening out & showing itself meandering into the distance – we love it when we can see the walking track ahead… 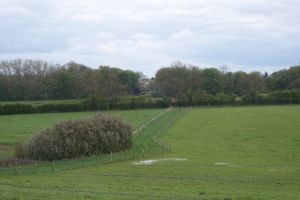 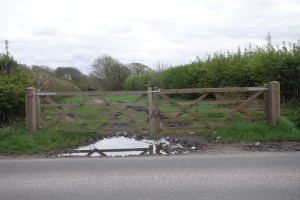 …& continue along a grass path for about 500 yards

10. We now emerge onto another very busy road… 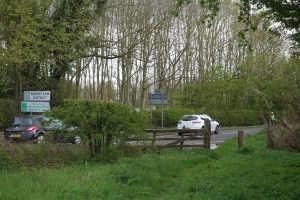 11. Walk along the road for about 50 yards to reach a lodge on the right. Turn down the side of it & through the barrier onto a hard track

12. Look across to the right to see where we’ve come from with the chimney & spoil in the background

Just inside the gate’s a memorial to commemorate five Canadian aircrew killed when their Wellington Bomber crashed nearby on 5th August 1944. On August 4 1944, Vickers Wellington HE 821 took off with its crew on a training flight from RAF Gamston. On the way back to base the plane ran out of fuel, causing a catastrophic engine failure. Despite the efforts of the pilot, it span out of control, crashing into a field near the village of Creswell

The event was witnessed by local schoolboy Gerald Plant, whose brother Joseph left money in his will to create a lasting memory of the airmen by erecting a memorial stone

13. So…welcome to Creswell Crags. Continue to the Visitor Centre…

There’s some really good information boards about the site & what to look for just outside the centre. Creswell Crags is an enclosed limestone gorge & the cliffs in the ravine contain several caves that were occupied during the last ice age, between around 43,000 & 10,000 years ago. Its caves contain the northernmost cave art in Europe. The evidence of occupation found in the rich series of sediments that accumulated over many thousands of years is regarded as internationally unique in demonstrating how prehistoric people managed to live at the extreme northernmost limits of their territory during the Late Pleistocene period. We’ll see them shortly

If you have a look at the aerial photo below, you can clearly see how everything fits into this narrow gorge 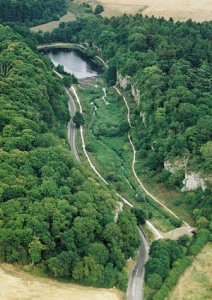 14. Walk past the centre & take the footpath that forks left into the woods…

There’s a clue where we need to head! 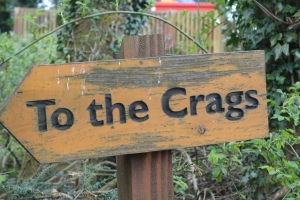 The path through the trees as we descend is beautiful…

15. At the bottom of the hill you’re directed across the bridge into the open Crags Meadow area. It’s a bit like walking into something from a Tolkien novel..

The meadow’s a great place for chilling & is also a learning centre. A lot of work’s been done here to create this space 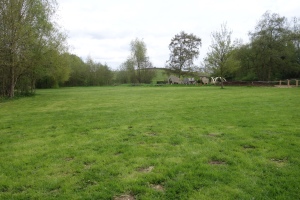 The caves along the cliffs contain occupation layers with evidence of flint tools from the Mousterian, proto-Solutrean, Creswellian & Maglemosian cultures. They were seasonally occupied by nomadic groups of people during the Upper Palaeolithic & Mesolithic periods. Evidence of Neolithic, Bronze Age, Roman & post-medieval activity has also been found there. There is evidence of Neanderthal occupation 50,000–60,000 years ago, a brief Gravettian occupation around 32,000 years ago & use of all the main caves during the Magdalenian around 14,000 years ago

17. Follow the path under the crags to the left… 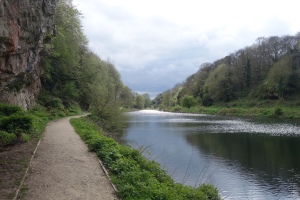 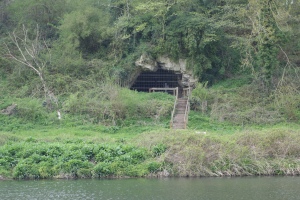 18. The lake peters out into a feeder stream, so pass through the gate & turn right along the clear path… 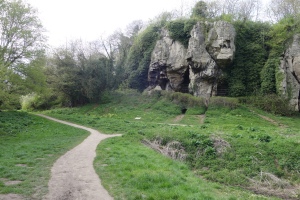 19. We’re now exiting the Crags & reading back to the village of Creswell…

Pass across the barrier & then continue to the road junction 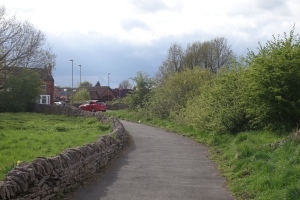 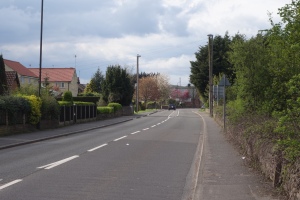 So that’s it…a short evening stroll around an extremely beautiful area & one that was totally unknown to us. Most people who walk in this area head to nearby Sherwood Forest, or Clumber Park, but we urge you to give Creswell Crags a try… you won’t be disappointed!