Parking: As this is a linear walk, Sarah, Ann, Helen & Alison parked their cars in both Chipping Warden & Charwelton. In Chipping Warden they parked by the beautiful church

Public toilets: Village pubs etc en route. However, on this section the ladies were unable to find anywhere to stop for a drink or snack, but maybe in non-Covid times there would be a tea room in Woodford Halse 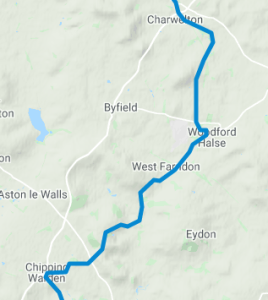 Section 2 of the ladies along the Jurassic Way is a 9 mile stretch starting in Chipping Warden & ending in Charwelton. Shall we see how they got on then?

1. Chipping Warden, where this section starts, takes its name from the village with a market & a hill from which a watch may be kept.  In the Domesday book, Warden is shown as “Waredon”.  The word is compounded from ‘weard’ meaning to watch & ‘dun’ a hill.  The hill referred to is Warden Hill which lies to the East of the village

‘Chipping’ comes from the Old English verb ‘ceapan’, meaning to buy, & refers to the market that was probably first held in the village during Saxon times

The Romans were also present in the area & the foundations of a villa were discovered about a hundred years ago. The house included a bathroom, something which would not be seen in the homes of the village for several hundreds of years

During Middle Ages the village was known for its large market. In fact it was so successful that in 1227, Henry III, at the request of the Bishop of Lincoln, withdrew the privilege of the market as it was seen as becoming more important than the rival Banbury one

It’s unknown when the Market stopped, but the base of the Market Cross can still be seen near the Church

After parking near the church & Market Cross, Ann, Sarah, Helen & Alison headed down Culworth Road where this section of the walk starts. The Jurassic Way is the second path on the left, around a quarter of a mile down the road. Although sadly not marked as the ‘Jurassic Way’, at least there is a footpath sign (see below)…

2. The path leads up to the woods in the photograph below…

The wood had clearly recently been home to a paint-balling event. There’s lots of little buildings to explore if you fancy it

‘Welsh Road’ also deserves a further mention. In medieval times it was a major drove route for livestock coming down from Wales to the markets of the Midlands & the Cotswolds

However, it also played a major role during the Bronze Age. North Wales had massive copper mines during this time. Bronze is an alloy of copper & tin & most of the tin came from the mines of Cornwall. It’s likely that these two metals would have been transported along prehistoric routes, until they came together guess where?

4. The path now climbs through several fields & gates. Sarah, Ann Helen & Alison didn’t have any issues finding their way at this stage, as they climbed up Warden Hill… 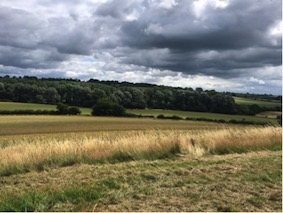 5. At the art centre the path turns right down the hill towards the lovely River Cherwell, which we’ll claim as a “Northamptonshire” river as it rises near Hellidon. It’s also a major tributary of the Thames which it joins near Oxford

6. Eventually the ladies reached the river where, unfortunately, they took a wrong turning again! The old bridge across the river had been washed away in the 2019 storms, but was being rebuilt when they were there…workmen were just finishing it off.

The only sign they could see was for the Macmillan Way (another of our favourites) which led straight ahead. They decided to take this & ended up in the village of Eydon (another stunning place, but not an intentional visit!)

They now realise that what they should have done is to follow the river to the left & visited West Farndon. The detour was roughly one mile & not too bad as the roads were pretty & quiet. The ladies met up with the Jurassic Way once more at the beautiful cottages below in West Farndon… 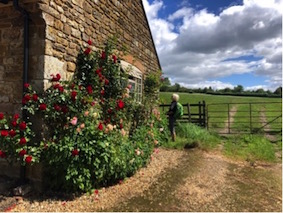 Evidence of Roman settlements have been found in the village

7. The path continues through the gate in the above picture & up the field to the left hand corner where they crossed the disused railway via a bridge. The railway was part of the Nottingham to London line (Great Central Railway), which opened in 1890s & closed in the 1960s. At this point you can make out Woodford Halse in the distance, which is their next destination…

8. The village is entered by a few houses & you can immediately see a big railway bridge. Go under the bridge into the hamlet of Woodford Halse

Just before the church the route turns left down Castle Street. Right in the middle of Castle Street is a random Jurassic Way sign! At the bottom of the street is a small wood. The path enters the wood over a small stream & bends to the right. You aren’t in the wood for very long & come out again by a small industrial site & turn left…

9. The path continues on the opposite side of the road to the next wood, but developers were building houses & had blocked the ladies way- they really were struggling at times on this section 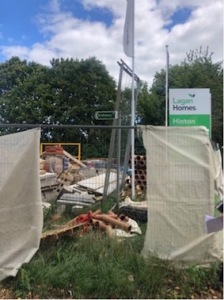 Undeterred, the ladies took the first road into the estate & soon found where the path continued. It’s a small road that leads to Charwelton Lodge with houses on the left. As it leaves the village behind it becomes a beautiful lane…

10. As the road bends left towards Carwelton Lodge, the Jurassic Way continues straight ahead with the hedge on the right…

The path is now straight & well signposted over several fields, crossing another disused railway. It is a lovely quiet section with open countryside…what amazing views!!

It has been supposed that Church Charwelton was deserted in the 15th century at the time of the War of the Roses, but it’s far more likely that the settlement’s depopulation was due to enclosure & the sheep population!

The path continues through the churchyard to the left of the church & passes medieval fishponds. The ladies found that this part was ridiculously well signposted compared with earlier parts! 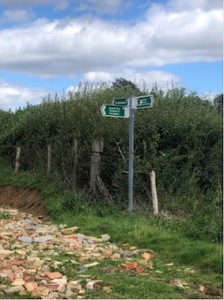 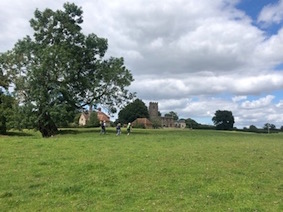 12. The last section before Charwelton is straight ahead with clear signs all the way…

And finally…the ladies end their day, & this section of the walk at the 15th century ironstone packhorse bridge 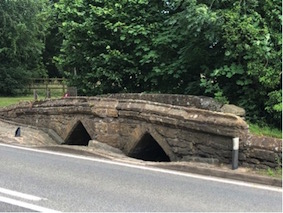 So that’s the end of Section 2 for our intrepid ladies. At times you can feel their frustration at the lack of signage which I completely agree with

But that section’s now complete & now onto the next stage…