Walk 15: Northampton: A brief walk around the historic town centre

Time to walk: We’ll leave this one entirely up to you as there’s many properties to visit/things to see (& you can always shop too!)

Parking: We used the car park near the County Courts on The Mounts 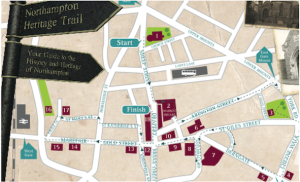 We’ve taken this route from the ‘Northampton Heritage Trail’ which begins at the oldest building in Northampton. Many of the streets and narrow passageways really give you the feel of Northampton’s past. In 1675 the town suffered a major fire resulting in a major rebuild.

Our walk today only covers a small area & part of the town’s history & we’ll put some more up as we go. St Thomas Beckett plays a major part around here too.

With the descriptions below, it’s important to click on the hyperlinks as they’ll lead you to much more information than we can write up on this blog.

1. From The Mounts car park head down Church Street where, on the right, sits Northampton’s oldest building – The Church of the Holy Sepulchre 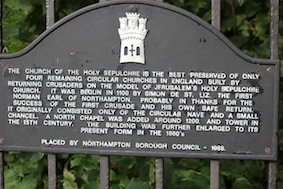 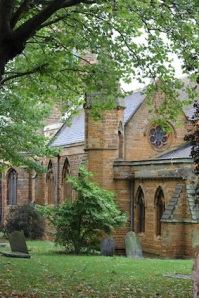 The church dates back to 1103 & is the best preserved of the 4 Norman round churches in the country. Unfortunately it wasn’t open today but we came back at a later date. The inside’s stunning so check when it’s open & make sure you pay it a visit. Recently it’s been used as a theatre, even staging a Shakespeare play 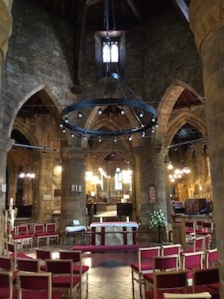 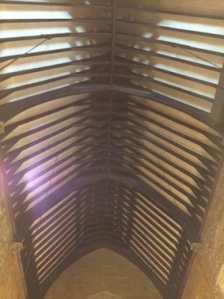 & bear left to arrive at what should be the biggest jewel in Northampton’s armoury…….the Market Square.

3. With some of the most beautiful buildings in the town, Northampton’s Market Square is one of the largest & oldest in the country. It’s just a shame that today it’s only about a quarter full. There’s also many tunnels running under the marketplace & no-one’s really sure what they were used for. 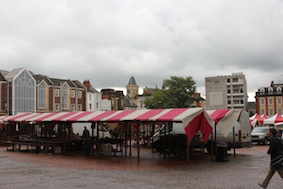 4. After crossing the square, bear left up Abington Street which is now part pedestrianised. There’s a great statue here to what the town once was, & still is, famous all over the world for…our shoe industry

5. A bit further up on the side is Northampton’s main library – a grade 2 listed building dating back to 1910. Have a look up at the statues on the face of the building

The Library also holds an important collection of works by the poet John Clare together with portraits & other relics.

6. Ahead now stands an impressive statue to honour Francis Crick & his US colleague, James Watson who discovered the double helix of DNA 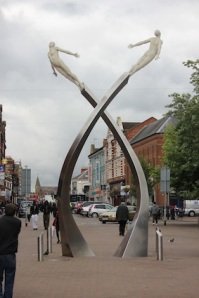 7. At the top of Abington Street turn right & continue down York Road

Before reaching the traffic lights turn right into the churchyard of St Giles Church. The 12th century original was rebuilt after the tower collapsed in 1616. The west door may look Norman, but it’s actually a Victorian reconstruction 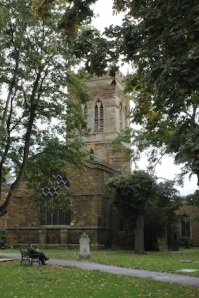 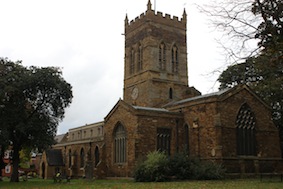 8. Walk out onto York Road & keep straight on into Cheyne Walk (the line of the old Norman walls) – there’s some fabulous buildings on the right & Northampton General Hospital on the left. 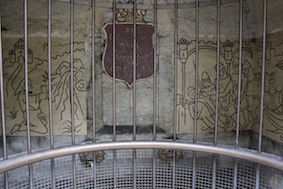 There are numerous references around Northampton to St Thomas Beckett & we’ll do a separate walk around these. This structure dates back to 1843 & preserves the spring (yes, the water is running) which was originally in the middle of the road.

Over the road is beautiful Becket’s Park – we’ll also do a feature on all the parks later.

9. Now head back over the road into Northampton’s Cultural Quarter. The town has made a real effort to promote this area & it appears to be paying off 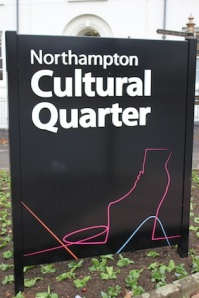 So head straight over the road into Derngate stopping outside another Northampton jewel…78 Derngate. Please have a look at the hyper-link.

This is one of Northampton’s most famous houses redesigned by Charles Rennie MacKintosh. Now completely restored to its former glories. A couple of years ago we visited Glasgow & took in the Art School & Willow Tea Rooms – both amazing.

If you never have then please take the tour of this amazing building.

10. Continue along Derngate & take a right up Castillian Street & then left into St Giles Street (if you have a spare moment turn right & visit the fabulous St Giles Cheese Shop). Keep looking upwards – there’s so much history in the buildings around here… 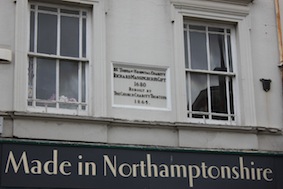 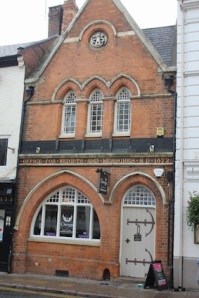 11. At the junction at the end of this street is the fabulous Guildhall. Stand back & take time to look at the beautiful statues & carvings – the statue on the far left is St Thomas Becket.

12. Now cross straight over into Guildhall Road (we’re still in the Cultural Quarter) which is the home of our museum & theatres.

On the left hand side’s the entrance to the Royal Theatre – again simply beautiful inside &, if you can, have a look at the painted safety curtain. The theatre’s now joined with The Derngate forming an amazing entertainment venue 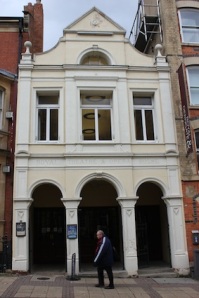 Cross over & head back up the hill. On the left’s Northampton Museum – famous for it’s collection of shoes, especially Elton John’s boots from Tommy 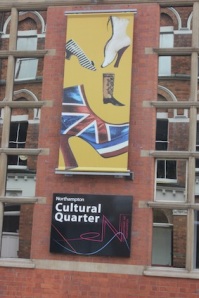 13. At the top, turn left & walk to arrive at The Sessions House

14. Over the road, on the right, you can see where we’re heading next – another of our jewels…

All Saints Church…. a beautiful building from the outside but step inside & it’s even better! It’s also a great place for a coffee/tea stop 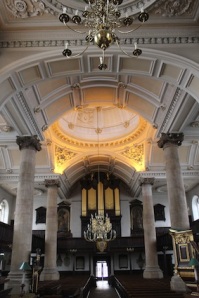 15. Okay suitably refreshed, turn what left down Bridge Street. There’s a lot of refurbishment down here due to a fire, but at the bottom is another church on an island known as St John’s Roman Catholic Church which is now a restaurant, aptly named The Church

16. Resist a beer at The King Billy & walk up Kingswell Street. On the right, stop  & have a look at a beautiful little building that many people simply walk straight past…

The stunning Beckett & Sargeants School for Girls. another of our listed buildings.

Continue to the top of the road & turn left down Gold Street. On the corner’s the former Grand Hotel which dates back to 1892 & was designed by local architect Charles Dorman. After a £2.3m restoration the hotel is once again open as a Travelodge.

17. Continue to the bottom of Gold Street (keep looking up as there’s some great buildings down here) & cross over into Mairfair.

After a hundred yards, on the left we come to Hazelrigg House , an Elizabethan town house dating back to around 1850 & owned by the Hazelriggs of Noseley between 1680 – 1831 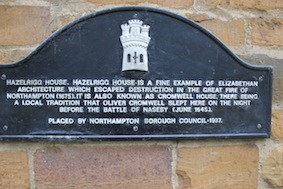 18. Next to Hazelrigg House is another jewel…St Peter’s Church. This is a Norman church dating back to 1160 & built on the site of an earlier Saxon church (click on the above link for more details). Unfortunately the gate was locked so we couldn’t get a closer look. 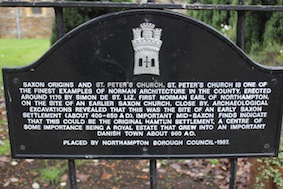 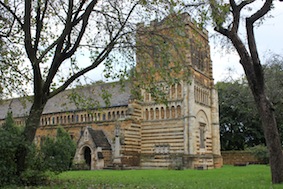 19. Now cross over the road up Chalk Lane & into the car park on the left. Head towards the mound & trees in the top left corner. 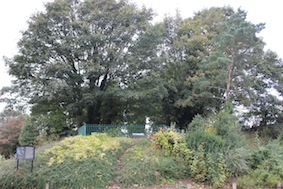 This is the remains of Northampton castle, built in Norman times. It was partially destroyed in 1660 & then the building of the railway did the rest. Have a walk up the mound 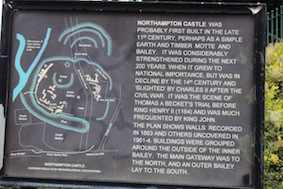 20. Walk back out of the car park to find another church…Castle Hill United Reform Church. The original part of the church was built in 1695 & is associated with the renowned 18th century preacher & teacher Philip Doddridge whose name is well associated with Northampton 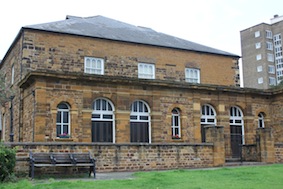 21. Let’s now return to Marefair & walk back up Gold Street, turning left up The Drapery where our walk ends. The street’s so called because it was a centre for drapery in the 18th & 19th centuries. 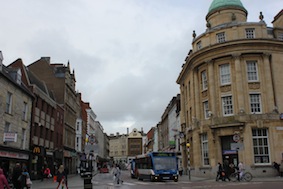 So….we have to admit that having lived in Northampton for many years today we’ve learnt a lot & have only really just scratched the surface, so we’ll definitely come back & do some more investigation of this great town.

Now……I think it’s back to All Saints Church for that coffee!!