Walk 111: Clondalkin Town Walk: An amazing tower but no Rumpelstiltskin!

Distance: 2.1 miles (3.4 miles) although this is a village walk so it’s possible to wander off route & explore different areas to what we did

Time to walk: No limits as only short

Parking: Plenty of on street parking 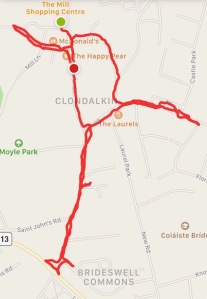 We were working in the local area so decided to have a look at the small town & its history. Clondalkin means “Dolcan’s meadow” & lies around 6 miles to the west of Dublin

Neolithic tribes first settled in the area around 7600 years ago, taking advantage of the site’s favourable location on the River Camac, overlooking the River Liffey & the inland pass between the mountains & the river. Evidence of the presence of the Cualann Celtic people (an early tribe possibly the Cauci on Ptolemy‘s world map) can be found in various mounds & rates

Clondalkin is believed to have been founded by Saint Cronan Mochua as a monastic settlement on the River Camac over 1,400 years ago (possibly late 6th or early 7th centuries). The round tower was built perhaps two centuries later (around 790 AD) as part of the monastery. By the eighth century, Saint Fugillus was Bishop of Clondalkin & noted gospel manuscripts were produced, the most famous of these being the Clondalkin Mass book which is on display in Karlsruhe, Germany. The monastery was burned to the ground by the Vikings in 832 AD, but it was later restored, influenced by the Viking settlers conversion to Christianity. The district remained under Danish control until the Viking defeat by Brian Boru at the famous Battle of Clontarf in 1014

The town witnessed another historic event during the Norman invasion in 1171 when there was a battle there between Richard de Clare & the last High King of Ireland, Ruairi O Conchúir. Centuries later, it was the scene for some of the fighting in the 1641 Rebellion, when the Gaelic Irish in Ulster, & later in the rest of the kingdom, & the Old English in the Pale of Leinster rebelled against rule from Westminster

1. This short stroll starts at the Mill Centre shopping centre, which sits on the site of the old Clondalkin Paper Mill, which was first built here in the early 1800s. The clean, fresh water of the Camac, which runs through the site, was ideal for paper making & the mill thrived. It changed hands many times over the years &, in 1913, was bought by the Becker Company who owned paper mills all over the world. Business boomed during the First World War as all British mills had switched to war production, however, after the war, the market went downhill & the mill closed in 1922 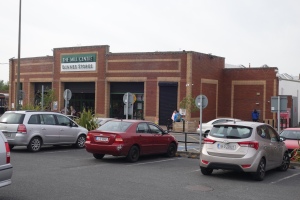 In 1936 it re-opened under the name ‘Condalkin Paper Mill’ & thrived again until 1982, when it was the only remaining paper mill in the area. Industrial disputes became rife & the workers occupied the mill in a year long attempt to prevent its closure. This was followed by two workers undergoing hunger strike, which resulted in a slight extension under a new name, before it was finally closed in 1987

2. The historic Round Tower is clearly visible from the Mill Centre, as it is from most of the town, so we walk towards it… 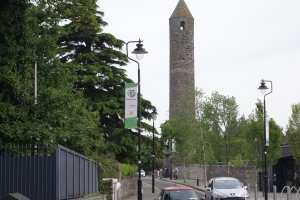 It really is a spectacular structure & the photos don’t do the size of it justice. Clondalkin Round Tower is built on the site of a monastery founded by Saint Mochua/Cronan in the 7th century. It’s one of only four remaining in County Dublin, the others being located in Swords, Lusk & Rathmichael. It stands over 84 ft high & is thought to be an early example as the granite on the lintels is flat. The diameter though is only just over 13ft, making it quite narrow 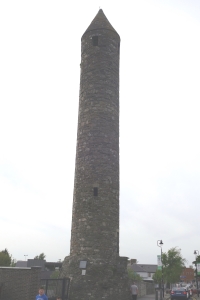 The most unusual feature of this Irish round tower is the very pronounced buttress at the base which is constructed with a different type of stone to the tower. The series of steps was believed to be added to the buttress in the late 19th century

There are 6 windows in the tower & the top 4 align to the four points of the compass. It’s thought that it served as a bell tower

3. Opposite the tower is Church Terrace. These lovely alms houses were built in 1879 in memory of Reverend David Reade… 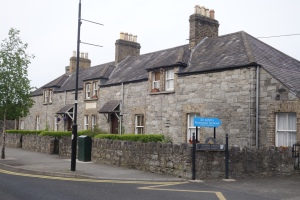 Next door’s the old schoolhouse…

4. Continue for about half a mile passing the junction with Main Street & Tesco, up the hill, where Tower Road turns into Convent Road to the crossroads…

Walk across the left side at the crossing to arrive at the beautiful, secluded St Brigid’s Well.  Legend has it that St. Brigid came to the site of the monastery at Clondalkin & established the well in the 5th century to baptise pagans. The structure around it dates from 1761 & the original railings were donated by the workers in the Paper Mills in the 1940s. The well was restored by South Dublin County Council in 1995 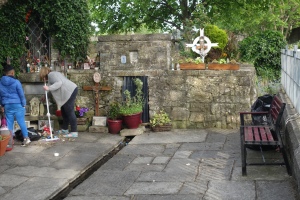 It is said that the water has curative powers & if a young girl dips a rag in the water & wipes her face with the rag it will cure any eye ailments. She should then tie the rag or clootie to the tree. There were many tied on the trees around the well & it was good to see the locals tending to the area so well

5. Turn round & walk back down the way we came, stopping on the right at the impressive Church of the Immaculate Conception…

The foundation stone was laid on Sunday 5th July 1857 by His Grace the Most Rev. Paul Cullen, Archbishop of Dublin. In a container placed under the stone were coins of Pope Pius IX & of Queen Victoria, along with an inscribed parchment. There was a service going on when we visited so we couldn’t really go inside, however the stain glass windows are supposed to be well worth a look

6. Adjoining the church is the Presentation Convent, built by Priest Fr. John Moore with a legacy left to him On 8th September 1857, Presentation Nuns arrived in Clondalkin & opened a school for girls

7. Continue back towards the Tower, but this time turn right down Main Street, the heart of the town…

Pass the small shopping centre &, up the hill on the right, the tower of our next destination can be seen…

8. This is Tully’s Castle a tall narrow tower (perhaps 16th century) & part of an adjoining building on its northwest side (maybe 17th century). Its origins are mostly undocumented, however the “Journal of the Royal Society of Antiquaries of Ireland 1899” gives the following information:

The name “Castle of Clondalkin”’ is applied to Tully’s Castle in a number of late eighteenth and early nineteenth century leases, which deal with a place called “The Sheepus”. The Castle was occupied for many years by a family named Tully. […] Since 1761 there has been no great change in [its] appearance. The Sheepus in these leases is referred to as … “ nearly adjoining the Castle of Clondalkin”

9. Slightly further up on the left’s another, castle-like building which is Clondalkin Library… 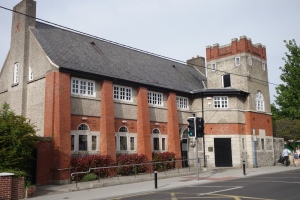 Turn back down towards the town centre &, just past the shopping centre, turn right down Orchard Lane…

We didn’t have time to visit, but all the locals recommend Quinlan’s The Black Lion for the best pint of the black stuff whilst in town

10. Follow Orchard Lane round to the left to meet the junction near the Mill Centre where we started the walk. On the left’s the local Garde station 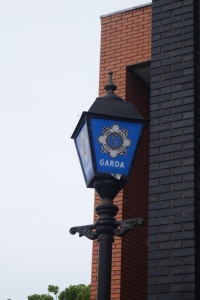 Turn left back towards the Tower, stopping on the left at St John’s Church, the gates to which were unfortunately locked…

The first church was probably built here in the 13th century, but was demolished in 1787 to make way for the building we see today which was opened in 1789 & refurbished in 1834

The above stone cross was possibly once a boundary marker, or maybe it indicated a specific grave

So that’s it…that’s the very small town centre of Clondalkin. We only went down to see the Round Tower which was really impressive, but once you start digging, it’s amazing what else you can uncover

If ever you’re in this area, have a look. Now…about that pint of the black stuff…