Time to walk: You could easily walk this in under an hour, but it’s around a town centre & there’s lots of history to stop & look at & things to explore

Difficulty: All on hard paths around the town with a few hills up streets

Parking: We parked in the public car park off Nunn’s Road, right in the centre of town

Colchester is Britain’s oldest recorded town with references back to 5 AD when Cunobelin was its ruler. Emperor Claudius visited in 43 AD &, 11 years later, a temple was built to honour him on the site where the castle now stands

In 60 AD another famous figure in history, Boudicea, destroyed the temple. Following this between 65 & 80 AD the town wall was built & is the oldest in Britain – we’ll see several parts of it on today’s walk

We’ll pick up on more of the historical side of Colchester as we come across various sites on today’s walk which we did in March 2014. More can be found by clicking on this link

1. Our walk starts right in the middle of the town opposite the rather grand Town Hall

2. Turn left down West Stockwell Street located at the clock tower end of the Hall…

3. Further down the street on the right is St Martin’s Church… 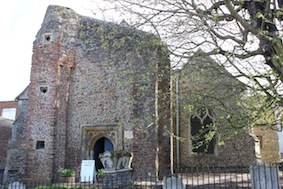 You can see, especially from the top photo, that the church is a mix of many styles & materials. The Normans, who built it, used old bricks & materials reclaimed from the Romans. St Martins is one of 6 surviving medieval churches within the town’s walls

The church was damaged in the Civil War & has been restored by the Churches Conservation Trust. Have a quick look inside… 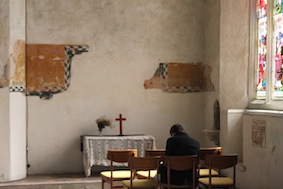 Some of the old murals are being restored

4. Back in the street turn right down Quaker Alley but, before you do, just past it on the right is ‘The Taylor House’

5. This is an area known as the Dutch Quarter… 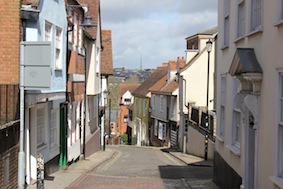 There’s more examples of their houses shortly, but first turn left & then right into St Helen’s Lane. On the left is The Stockwell Chapel, built 1816-17…

6. Further along on the right is an open grassy area that was a Quaker burial ground…

7. At the end of the street on the right is St Helena’s Chapel… 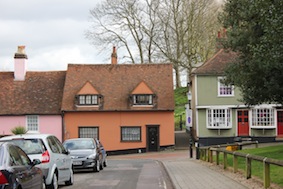 The 14th century Chronicle of Colchester states that the chapel was founded by the saint herself & refounded by Eudo Dapifer in 1076. Most of the present building dates from the 12th & 13th centuries & incorporates Roman brick. It was closed in 1539 & then became a house, a school, library, Quaker meeting-house & warehouse. In the 1880s, the Round family who owned the castle, had the chapel restored by William Butterfield. After use as a clergy meeting-room & a parish hall, it was used by the Castle Museum as a store. Since 2000, it has once again been used as a place of worship by the Orthodox Parish of St Helen

8. You’re now in Maidenburgh Street & standing on an extremely historic site…a Roman Theatre. The remains of this were discovered in the 1980’s when roadworks were taking place. Colchester was the only place in Britain to have 2 Roman theatres

A few yards up the street on the right is a small museum where, if you glance through the windows you can see some of the foundations 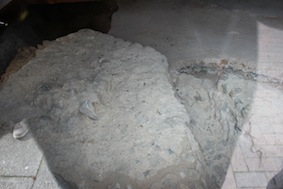 The theatre was built entirely of tile & stone & would have seated at least 3000 people. A plan of how it would have looked is below

Now turn & have a look at the paving bricks you’re standing on. The different coloured ones mark the location of the foundations under the ground

An artist’s impression of the theatre

9. Looking back down Maidenburgh Street there’s more examples of the Dutch Quarter houses… 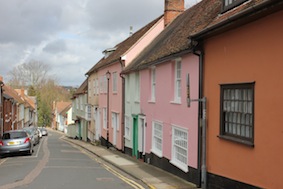 …but instead of heading back down the road, turn down the alleyway opposite the museum… 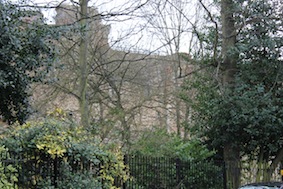 Our first glimpse of the Castle

10. Castle Park opened in 1892 & covers 11 acres. It was once the site of The Temple of Claudius & then the Normans subsequently built their Colchester Castle over the Roman remains

There was a fun run on today

We continue up the hill towards the main Castle

Colchester’s Keep is the biggest ever built in the United Kingdom & is the largest that remains in existence throughout Europe. At 152 x 112 feet it’s one & a half times the size of the “White Tower” at the “Tower of London”

The museum now houses an extensive collection of Roman exhibits

Here’s how it would have looked 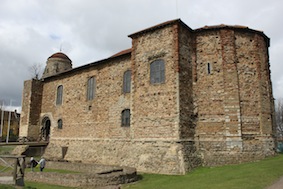 11. At the time of our visit the exhibitions in the Castle were undergoing a £4.2m makeover & were due to open in spring 2014. On a really nice summer’s day Castle Park’s a lovely place to while away a few hours

Exit via the impressive South Gate… 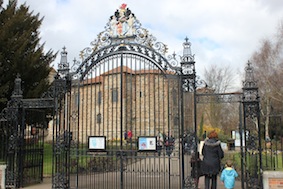 The view back to the Castle

12. Just outside the South Gate is the War Memorial …click on the link for a great synopsis 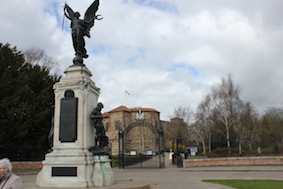 13. Take care in crossing the busy High Street. Over the road is All Saints Church which is now the Natural History Museum

14. Head back into the town centre down Queen Street…

…& down an alleyway on our left where you’ll come to a fantastic new building called ‘firstsite‘, which is a contemporary visual arts centre

‘firstsite’ is a contemporary art gallery which opened in 2011 & was designed by Rafael Viñoly. Its exhibits are on a rolling 6 monthly basis & it’s an impressive gallery… 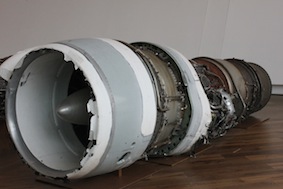 15. Walk back to the main street, which follows the line of the Roman streets, & continue to head down until arriving at the junction with Vineyard Street. Turn up it. It’s easy to spot the start of Vineyard Street!! 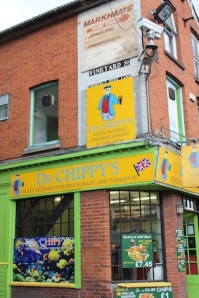 They even do ‘tandoori fish & chips’!!

16. After about 100 yards the right side of the street opens out into a car park & sections of the Roman wall can be seen – it’s quite a mish-mash as buildings have been built on top of the wall

Stop for a moment at the junction below with Abbeygate Street… 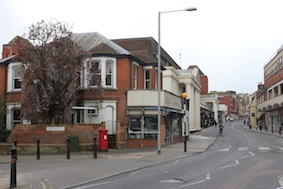 17. On the right here are Scheregate Steps. This is where a breach of the Roman wall occurred, probably in the Middle Ages when a Roman drain was opened up to produce a walk through for workers in St John’s Abbey

18. Turn round & walk down Abbeygate Street towards the underpass…

Down here there are murals & a replica of the tombstone of Marcus Favonius Facilis, a Roman centurion. The original can be seen in the castle. Others show a coin with an ear of corn (a sign of how wealthy the region was)

19. Emerging from the abyss, turn left & walk up the hill to have a look at St John’s Abbey gateway

This 15th century gatehouse is the only remaining part of the Benedictine Abbey of St John. It was built around 1400 following the Peasants’ Revolt & was later attacked during the Civil War

See this link for more details

20. Retrace your steps back & turn left up Flagstaff Road… 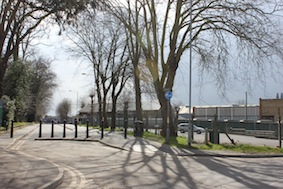 Here’s how it would have looked

21. Although not much can be seen above ground today, the mounds on the right (shown below) indicate where the 8 starting gates were when up to 8 teams of 4 horses pulling chariots charged out along the 440 metre track

22. The area you’re now in was the former garrison barracks before they moved elsewhere. Colchester still has a major garrison presence

Take the next right turn… 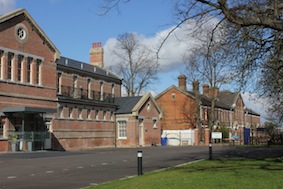 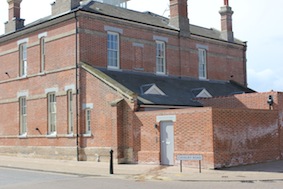 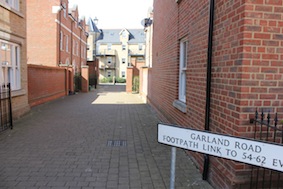 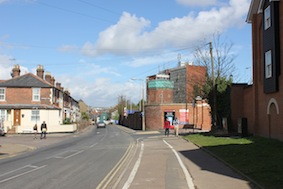 Where we turn right

23. Now head down the hill back towards the town passing two traditional pubs, although they’ve now had their names changed… 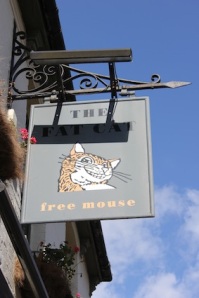 24. Another underpass descent into the abyss awaits again with further murals

This one’s of William Gilberd a famous physician & scientist who was born in the town. Eventually you emerge & head up Headgate & then turn left along Crouch Street

On the left is Colchester’s oldest pub, The Bull. Today it appears to be primarily a music venue 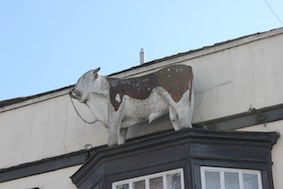 Not going to argue with him!!

25. As you move along Crouch Street you’re walking just outside the Roman wall which is behind the buildings on the right. It’s not until you turn right at the end of the street that you’ll see it again… 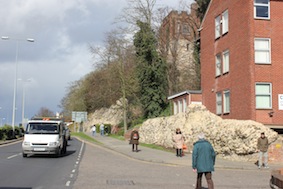 26. Shortly there’s some steps that lead to another breach in the wall which leads up to At Mary at the Walls Church which is now Colchester Arts Centre 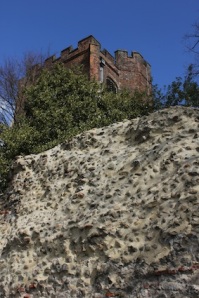 It’s the site where 23 Protestant martyrs were executed by burning in the reign of the Mary I. In the English Civil War a Royalist army used the church tower as a gun emplacement, which resulted in its destruction by New Model Army siege batteries. There was a theory that the tower gave rise to the rhyme Humpty Dumpty although this is thought to be simply speculation

27. Continue to follow the wall heading towards The Hole in the Wall pub… 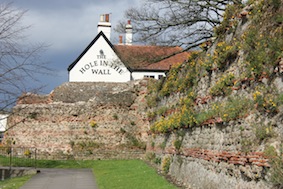 …& just before reaching it, you come to one of Colchester’s most famous landmarks, The Balkerne Gate… 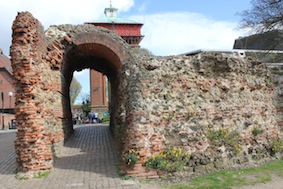 This was an arch built in AD49 to mark the foundation of the Roman occupation of Colchester & is now the best preserved Roman gateway in Britain.

Here’s how it may have looked in Roman times…

28. The Hole in the Wall pub’s also worth a look at as, can be seen from the photo below, it was built on top of the wall

29. Right it’s time to get this walk finished! On the right here is The Mercury Theatre… 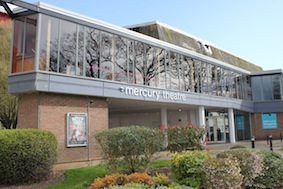 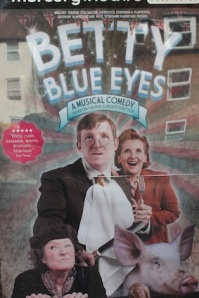 Saw this one in London & can recommend it

…but what’s that massive structure ahead?

The tower was completed in 1883 to supply clean water to the people of Colchester & was massively controversial. It initially didn’t work properly & it wasn’t until 1895 with the help of a new pumping station that things were finally resolved. It was finally taken out of action in the 1980’s & still dominates the skyline today

Why was it called ‘Jumbo’? It was because the Rector of the nearby St Mary’s Church protested it would block out the Church & called it ‘Jumbo’ after London Zoo’s most famous elephant which was sold to PT Barnum

30. After passing in front of ‘Jumbo’  turn left into Church Street where, on the corner is the Colchester Quaker Meeting House 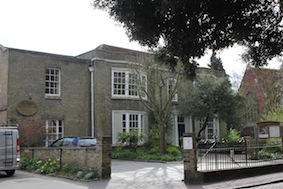 31. Now it’s simply a left along Head Street & then right back into the High Street to where this walk started

So that’s our little historical ‘Roman around Colchester’ done. There’s so much history in this place so if that’s what you’re into you won’t be disappointed.

Colchester’s what we’d call a typical 2014 town…some historical parts, some good shops & other areas that are full of fast food joints. As a base though it’s great for exploring this part of Essex & also southern Suffolk (see our quick walk around Lavenham)

Unfortunately this time we didn’t get to see one of Colchester’s most famous attractions…Colchester Zoo. Ah well..check out the link. Next time…