Time to walk: Only about an hour, but this walk can be done as part of a bigger trail

Difficulty: Pretty much all on wooden boardwalks, although there’s a small beach to cross. As it’s a cliff walk there are lots of steep steps & some slopes so it is quite strenuous at times & not suitable for wheelchairs or buggies

Parking: In the public car park which is right beside the Indian Ocean so look out for whales & dolphins etc

Public toilets: At the car park

This short walk is one we did on our 2017 South Africa holiday. The Storms River is part of the Tsitsikamma National Park in the Eastern Cape, a protected area on the famous Garden Route. It’s a coastal reserve well known for its indigenous forests, dramatic coastline & the Otter Trail. On 6 March 2009 it was amalgamated with the Wilderness National Park & various other areas of land to form the Garden Route National Park

The park covers a 50 mile long stretch of coastline. Nature’s Valley is at the western end of the park, & the main accommodation is at Storms River Mouth where we spent two nights.

Near the park is the Bloukrans Bridge, the world’s highest bridge bungee jump at 709 ft

The word “Tsitsikamma” hails from the Khoekhoe language tse-tsesa, meaning “clear”, & gami, meaning “water”, probably referring to the clear water of the Tsitsikamma River. Other meanings are ‘place of much water’ & ‘waters begin’

This area contains some of the best walking trails in South Africa &, although today’s walk is only a short stroll it’s nevertheless very spectacular

1. We realise that most of our readers may never have the opportunity to do this walk so we’ve left out many directional points & written it more as a travel blog

Pay the entrance fee to the lovely ladies at the entrance to the park & be prepared to fill in details of your passport etc – they like to know who you are around here! Once through the road snakes down the cliffs until you reach the stunning coast line & the Indian Ocean

2. The signs we’re looking for point us towards the end of the road & the Storms River Trail which leads down the jetty towards the ocean. This is big adventure / activity country in South Africa & the main activity here is sea canoeing

3. The steps on the left are our route. This is also the start of the famous Otter Trail which is a hiking trail & is named for the Cape clawless otter which lives in this region. This trail is widely regarded as one of the finest in the world & stretches from Storms River Mouth in the east to Nature’s Valley in the west. It’s 26 km long as the crow flies & 44 km as the hiker walks. Walking the trail takes 5 days, & the 4 nights are spent in comfortable huts with superb views. The route is located entirely within the Tsitsikamma National Park, which protects an 80 km long strip of coastal mountains, forest & beaches

The trail traverses a very scenic landscape, never straying far from the shoreline, but often climbing steeply & then descending to the beach or a river crossing

It certainly is a fantastic place to start a walk…

…& where there’s a view there’s normally a bench!

And…there’s even your own private beach house… 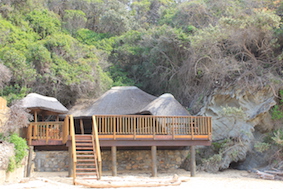 4. The route is easy to see up the steps onto the boardwalk… 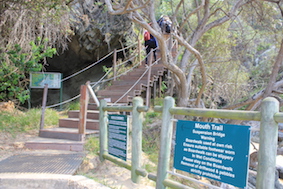 5. The early part of the route passes small waterfalls… 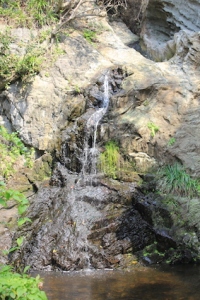 …& also some rather enticing routes back down to the lovely beach

Not only is this a walking trail, it’s also educational & a certain person was excited to arrive at an outdoor learning area that has some superb boards giving information about the plants & creatures that live in the Tsitsikamma area

6. The whole time we’re walking, we’re climbing higher& higher & there are soon some magnificent view to be had – as always don’t forget to keep looking back

Eventually the higher we go, the more the spectacular views ahead of the river mouth begin to materialise

7. There were people gathering to take photos so we wandered over to see what was going on – what are these creatures! 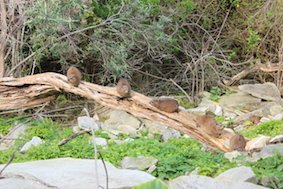 The closest living relatives to hyraxes are the modern day elephants & sirenians. The Dassie is found across Africa & the Middle East in habitats with rock crevices into which it escapes from predators. They typically live in groups of 10–80 animals, & forage as a group. They have been reported to use sentries where one or more animals take up position on a vantage point & issue alarm calls on the approach of predators 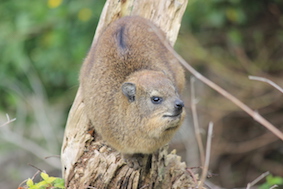 Captive rock hyraxes make more than 20 different noises. They are the first non-human species in which structural balance was described. They follow “the friend of my friend is my friend” rule, & avoid unbalanced social configurations

8. The route is well sign-posted & we appear to be getting closer as there are people coming back the other way who are breathing rather heavily!

And soon we get our first view of the suspension bridges… 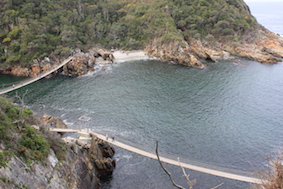 9. They appear to be a long way below us so there’s only one way to get down there – some very steep steps which could easily when wet 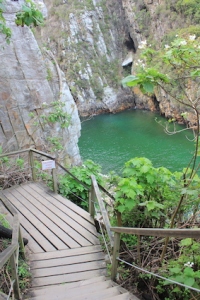 What’s the first of two suspension bridges we’re going to cross now appears in its full glory & one of our walking party goes distinctly quite – she’s not a fan of these bouncy things!!

Come on let’s cross, but be careful to count how many people are on it as it’s a maximum of 25 & strictly no jumping!!

11. The far side is just some rocks & the Otter Trail continues up the cliff. Looking back you now realise that the return route is across another bridge on the other side – that made someone very happy!

So about turn & let’s go, crossing back over the Storms River Bridge the way we came. Now turn immediately left to find the next shorter one 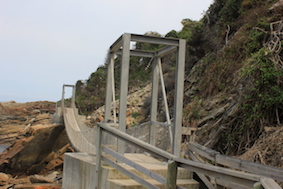 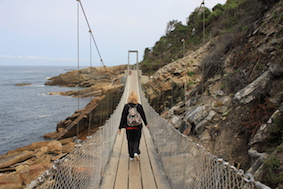 12. We’re now going to find out why the people we met on the way were puffing so much. The return path climbs steeply back up the cliff…

One of the most common, yet beautiful & “cheeky” birds in South Africa came to have a chat just here…a red winged starling. They don’t look much in the photo below, but are spectacular when in flight 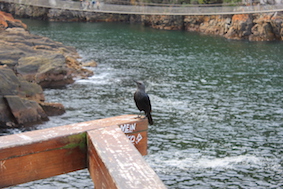 The red-winged starling (Onychognathus morio) is a bird of the starling family Sturnidae native to eastern Africa from Ethiopia to the Cape in South Africa. It is known in Afrikaans as the rooivlerkspreeu, and as iSomi in Xhosa and Zulu.

13. Taking your time to climb up to where this path joins the outward one is highly recommended & there are plenty of benches to sit down for a while to catch your breath & admire the views

At the junction we turn left & follow the boardwalk back along the cliff & down to that lovely beach where we take time to sit on the rocks & eat a rather disappointing pithy South African orange!

So that’s it..the first of a couple of international walks in a land of contrasts. If ever you’re in that part of the world…