Time to walk: Just over 1 hour, so perfect for a pre or post pub lunch

Difficulty: A mixture of hard pavements, fields & canal paths. Fairly flat easy walking with some gates, but no stiles. We did this walk on a wet day in March 2020 & it was muddy in a few places

Parking: Car park in Blisworth next to the starting point at the Royal Oak

A beautiful Northamptonshire village, rolling countryside with a babbling brook & the Grand Union Canal are all part of this walk so what’s not to like & we know you will!

Situated roughly 5 miles south of Northampton, Blisworth‘s late Tudor & 7th century houses & cottages show its former importance. Many of the ‘chocolate-box’ properties are made of local iron & limestone. During the 19th & 20th centuries, iron ore & limestone were quarried at Blisworth. A limestone quarry began in 1821 north east of the canal tunnel & was connected to a canal wharf at the west end of the tunnel by a horse-drawn tramway. The tramway ran from the quarry, across the Stoke Bruerne Road & above the west end of the tunnel. Trains of loaded wagons descended by gravity & empty ones were pulled up by a horse. There was a chute for filling the canal boats from the stone wagons. The quarry was closed in 1912 or 1913

A trial iron ore quarry operated in 1852, probably close to the east side of the Towcester road. The ore was sent to an ironworks in Staffordshire. The ore was probably taken by horse and cart to the canal for despatch to the ironworks. This quarry closed in 1855, but was reopened in 1859, closed again in 1861 & reopened in 1863. At this time the ore was taken by horse & cart through the village to be loaded into railway wagons at Blisworth Station. Further iron ore quarries were opened to the west of the village in about 1873 & a few traces of all of these remain mainly in the form of depressed field levels & some buildings connected with the later quarry

The village is the site of the  famous Blisworth Tunnel, which we’ll come across on this walk. The London & Birmingham Railway, under the surveying & construction control of Robert Stephenson, bypassed Northampton & opened a station in Blisworth in 1839. In 1842, after much discussion, Lord Grafton agreed to fund a new station as long as it was a “first class” station, i.e., all trains stopped at it. The station closed in January 1960 & the main railway line remains, electrified in the 1960s & is now part of the West Coast Main Line

1. Today’s walk starts in the centre of the village outside the Royal Oak pub… 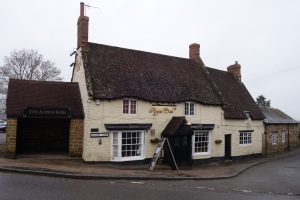 The pub was built as an inn in the 15th century & is popular amongst canal boaters, especially during the annual festival. It lost its thatched roof to a fire in 1958. The pub’s well worth a visit & in summer has a large garden at the rear 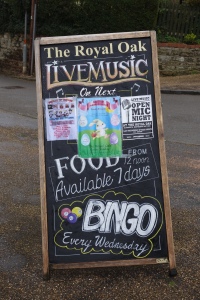 2. Facing the pub, turn left & walk past the car park down the High Street passing the local store… 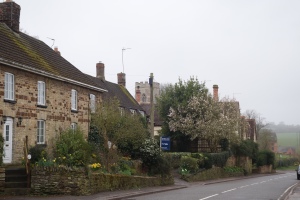 Set back on the left’s the Church of St John the Baptist, which dates back to the 13th century, with additions in the 14th & 15th 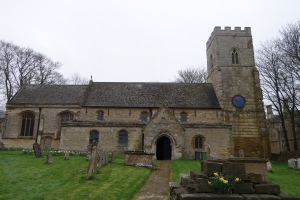 3. The road descends towards the canal & the large building ahead which is the village’s old corn mill. Blisworth Corn Mill was built in 1879 after the previous mill & bakehouse in Stoke Road was damaged by fire.  It was sold in 1920 so the Westleys could expand their business at bigger mile on the River Nene 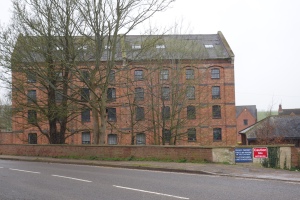 The Grand Union Canal Company bought the mill in about 1930 to use as a warehouse & the building was used in the Second World War to store hundreds of tons of tinned food rations. Today it’s been converted into residential flats

4. We must confess that the flats do look rather lovely, especially the ones that overlook the canal itself, with views towards the boat yard… 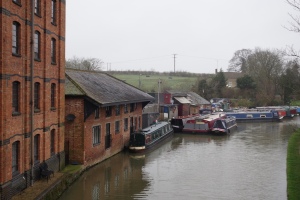 Cross the road. The left side path running alongside the canal is will be the one we take on our return to the village 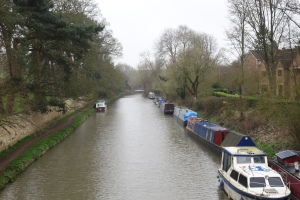 5. At the junction turn left & walk up the hill. You’ll need to cross the road, but there’s a narrow footpath that takes you past the speed limit sign. After the houses & lay by on the left, look out for a bridleway sign towards Shutlanger… 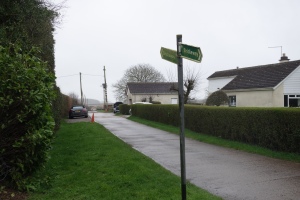 Walk down the hard path towards Oakwood Farm, ignoring the ‘Private’ sign 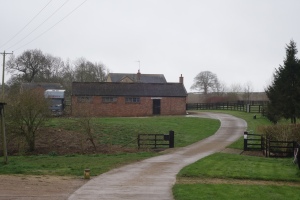 6. Thanks to Penny for telling us that the farm have now put a new footpath marker in showing that the route is left between the old barn & the stream, following the grassy track…. 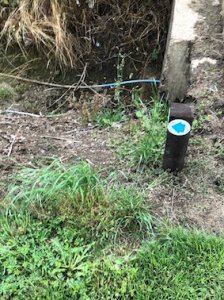 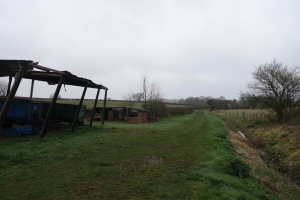 The hedges on both sides come to an end, but the path continues straight ahead keeping a hedge on your left. The spring blooms were just starting to emerge… 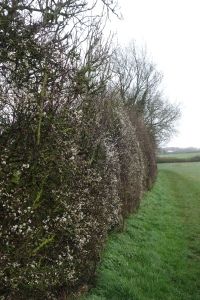 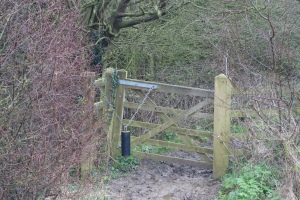 7. Continue in the same direction across the next pasture & through another gate in the corner. This is really easy walking as the path remains straight… 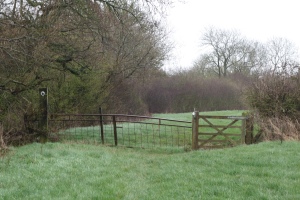 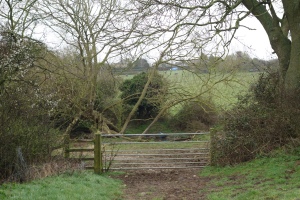 8. We’ve walked along quite a bit of The Midshires Way before, especially on our ‘Northamptonshire Round’ Walk. The Midshires Way was opened in 1994 & is a long-distance footpath & bridleway that runs for 230 miles from the Chiltern Hills from near Bledlow in Buckinghamshire, through Northamptonshire, Leicestershire, Nottinghamshire & Derbyshire to Stockport, Greater Manchester. It also links several other long-distance walking routes or trackways including The Ridgeway, the Pennine Bridleway & the Trans Pennine Trail

What’s great is there are many shorter walks that take in part of it, likeT here. The Northamptonshire section runs for 46 miles & also takes in the Brampton Valley Way, passing through two old railway tunnels. Check out our Walk No. 53 which takes in one of those tunnels

Our route lies to the left & follows a delightful babbling stream. This would be a great area to have a picnic on a warm summer’s day 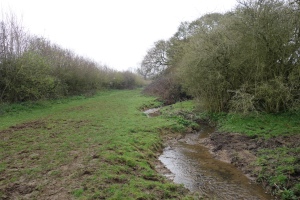 9. Pass through the gate into the next pasture. There’s a large livery nearby so you’re likely to encounter horses along this stretch of the walk. Look across to the tower on the hill to the right… 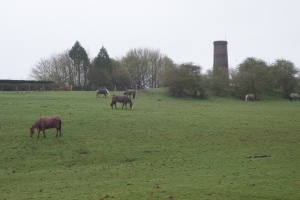 This is one of the ventilation shafts for the Blisworth Tunnel on the Grand Union Canal, which we’ll come to shortly. The shafts were mainly built from 1871, when steam tugs were used to pull boats through the tunnel. Prior to that travel through the tunnel was only achieved by men lying on their backs pushing the boats with their feet, a process known as ‘legging’ 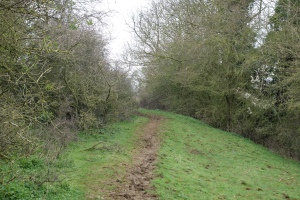 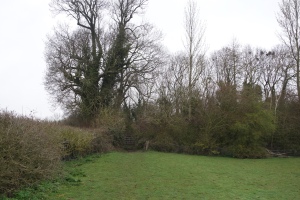 11. After passing through the gate & walk along a narrow path through trees. It eventually turns into a harder surface & will eventually meet the Stoke Bruerne Road… 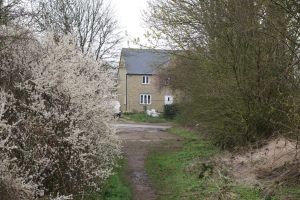 …but, before arriving at the road, turn left down the hard track down to the canal 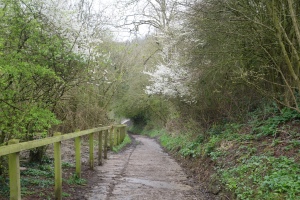 12. The track arrives at the Grand Union Canal at the Blisworth end of the Blisworth tunnel. At 3,076 yards long it’s the third longest navigable canal tunnel on the UK canal network, after Standedge Tunnel & Dudley Tunnel, & the ninth longest canal tunnel in the world. At its deepest point it’s ca.143 feet below ground level 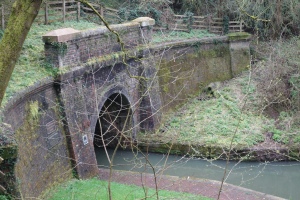 The tunnel has no tow path inside, but is wide enough for two narrowboats to pass in opposite directions. Work began in 1793, but errors by contractor left a wiggle in the tunnel, & after three years work it collapsed due to quicksand, claiming the lives of 14 men. It was then decided to begin again with a new tunnel

By the time the rest of the Grand Union Canal had opened between London & Braunston & in 1800, apart from the crossing of the River Great Ouse, the section of canal from Blisworth to the lower end of Stoke Bruerne locks was the only section unfinished. This was despite the tunnel having been under construction for seven years, the gap was filled by a temporary horse-drawn tramway over the top of the hill, with goods being transported from boat to wagon & back again. In March 1805, the tunnel was finally opened 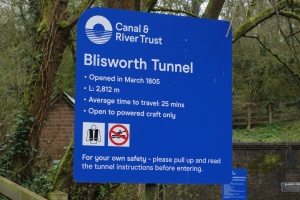 Due to changes in the shape of the tunnel over time, the tunnel became unnavigable. There was major rebuilding in the 1980s, with sections lined with pre-cast concrete rings. It was also used to test out the materials that were later used on the Channel Tunnel

13. The Grand Union Canal is now going to take us all the way back into Blisworth & this is a particularly peaceful stretch… 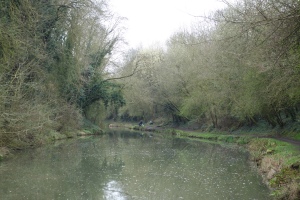 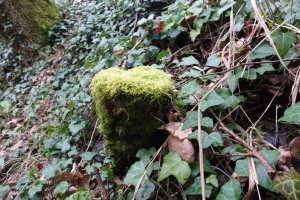 If you fancy sitting & watching the world go by, then we can recommend Jim’s Bench with a fine view 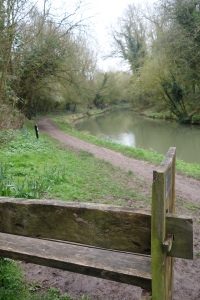 14. After turning a slight bend, the canal arrives at the bridge we stood on watching the dog jump in the water & the old corn mill again… 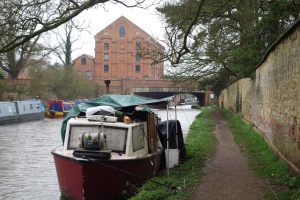 So that’s the end of a perfect little stroll. Like we said this would be ideal combined with a meal at the Royal Oak, or you could carry on further up the canal to the Walnut Tree