14/8/21 PLEASE NOTE THERE IS CURRENTLY A DIVERSION FROM POINT 11 DUE TO EXCAVATION WORK. THIS MEANS WALKING ALONG A STRETCH OF BUSY ROAD

Time to walk: With a stop to look at Kirby Hall, this walk took us about 2.5 hours

Parking: We parked on the street outside Gretton Village Hall in Kirby Road

Today’s walk is set in the far north of the County, on a ridge above the beautiful Welland Valley & close to the border with Rutland, England’s smallest County

It begins in the village of Gretton, which is situated 3 miles north of Corby & passes through farmland to suddenly appear at stunning Kirby Hall. We then turn west, passing the outskirts of Corby, before heading north once more back to Gretton

The surrounding landscape was once full of ironstone quarrying to supply the steel works of Corby. Today though the landscape has been restored to its beautiful best

Gretton is in Rockingham Forest, a former royal hunting forest covering some 200 square miles. The village takes its name from the phrase “Great Town”

Gretton is one of the few villages to retain its stocks & whipping post, which can be found on the village green. The last recorded use was in 1858, when a villager was put in the stocks for six hours after failing to pay a fine for drunkenness!

Shall we get going then before they’re used again?

1. We’ve parked on the street outside Gretton Village Hall…

2. Walk directly opposite down Southfield Road, continuing to the very end, where the hard surface finishes & becomes a gravel track called Fullen Lane… 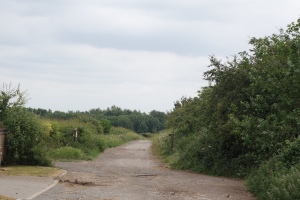 We’re going to follow this track, despite others branching off it, pretty much all the way to Kirby Hall. A word of warning though…the Lane is obviously well used by dog walkers & many of them do not “pick up” or put it into the hedge bottoms

3. The first junction with another large track comes after roughly 400 yards, which as we said should be ignored. Shortly after that another one cuts off diagonally right across a field – ignore that too

The track turns slightly right. In the distance on the left you’ll see some large farm barns…

4. Across the fields to the right can be seen the brooding structure that was once home to Rockingham Motor Speedway, which we’ll pass closer to later on this walk

5. At the end is a metal gate. Pass through this into a pasture. At this stage the going starts to get a little hilly, but nothing to worry about… 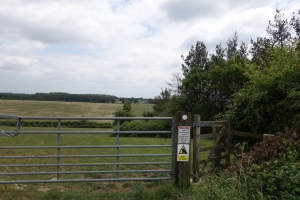 Across to the right you can just make out the towers of Kirby Hall. Pass through the next gates on the right…

Take note of the sign on the gate. On this part of the walk &, on the return journey, we encountered a couple of ‘uninterested’ bulls & some extremely feisty & nosey bullocks

6. Walk diagonally right up the hill in the direction shown by the waymarker on the gate. At the top of the hill there’s a gate to escape through in the hedge to avoid the advancing herd

7. On the other side of the gate, straight in front of you is the fabulous north facade of Kirby Hall. Unfortunately you don’t get to see the main facade on this walk

Kirby Hall today is administered by English Heritage & is an Elizabethan country house once owned by Sir Christopher Hatton, Lord Chancellor to Queen Elizabeth I

It’s a leading & early example of the Elizabethan prodigy house. Construction on the building began in 1570 at the behest of Sir Humphrey Stafford of Blatherwycke who was to die five years later. Sir Christopher Hatton, whose main home was at Holdenby bought the estate. He was a favourite of Elizabeth I & became Lord Chancellor in 1587. He was also known as the “Dancing Chancellor”

Sir Christopher Hatton was also known as the ‘Dancing Chancellor’ & he always hoped that Queen Elizabeth I would come to stay. There’s no evidence that she actually did, but there’s a ghostly story!

In 1589 he held a special banquet in the great hall, after he led the Queen down the steps to the lawns where he said goodbye. Apparently on moonlit nights candles can be seen flickering in the windows of the hall, whilst Elizabethan music can be heard as ghostly figures perform a dance!

When he died the hall passed to the second Sir Christopher Hatton, his cousin, & stayed in his hands until 1764. As there were no heirs it then passed down to the Earls of Winchelsea

Christopher was also know as Kit & was warned by the “wise women of Rockingham” that he would die after being hit by a bolt of lightening. At midnight on Sunday 29th December 1672 Kit was staying at his house on Guernsey which was close to where 250 barrels of gunpowder were stored. A storm arose & a bolt of lightening struck the magazine & also wrecked Kit’s house! Luckily though he survived

Don’t say we don’t do our research to bring you some stories!

8. Walk straight down the hill, towards the gate on the right side to get a closer view

To get a peek at the gardens at the front of the house, walk straight ahead to the metal gate. you can get an idea of the splendour of the place

9. Time to stop being nosey & walk down the tree lined avenue across the cattle grid… 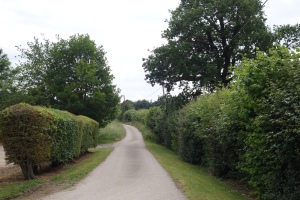 10. The land on the left used to be the site of the old Kirby village. Eventually the road arrives at Kirby Lane so pass through the gate, carefully cross the Lane & walk through the gap in the hedge, as shown by the signpost 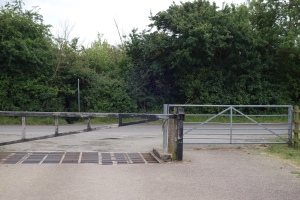 Immediately through the gap turn right & follow the field edge…

Ahead in the distance is a building in an extremely secure area, plus the grandstands of Rockingham Motor Speedway

11. Walk through the bollards & continue alongside the security fences. It’s quite good fun watching all the security cameras all turning to look at you as you near them… 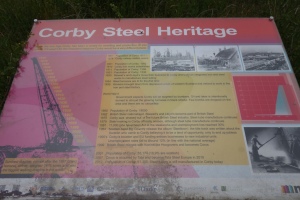 12. Go through the next set of bollards & continue on the path to the road. Turn right & walk on the verge down the hill to the sharp left bend…

13. The route back from here to Gretton is pretty much a straight line & begins by heading straight on up the hill at the bend, as shown by the marker post…

Pass though the gate, noting the sign. Just when we thought we’d finished with the bovines today!

14. The pull to the top of the hill & the next one are probably the two steepest you’ll encounter on this walk, but they’re not too strenuous. The track levels out at the top of the slope (luckily the huge bull was safely behind a gate!) & then plunges down before rising steeply to the next gate…

15. Pass through the gate into an arable field once more. The farmer has left a path clear ahead, but it’s basically straight towards the gap in the hedge… 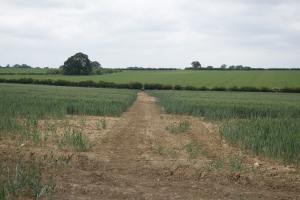 In the hedge is another stile so climb that & pass into the next field, &…where’s the path gone?? No track left clear & no marker post! 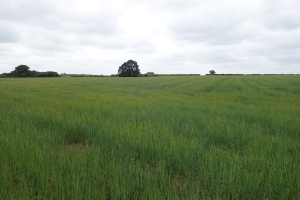 Luckily we had an Ordinance Survey map with us, so could see that it should have been straight ahead aiming just to the right of the tree in the picture above. It was still annoying to have to walk round the edge of the field to get there

16. Anyway we finally arrive at, & walk through the gap… 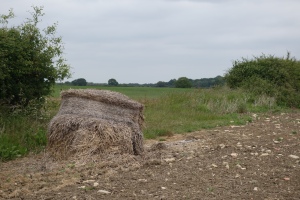 Again there’s no footpath marker, but our map tells us it’s straight ahead, keeping the hedge close on your right 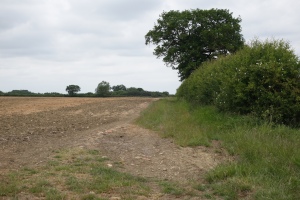 17. At the end of the field the path rejoins the lane that we walked to Kirby Hall on…

There’s several a choice of paths back to Gretton now, but we decided that because of the lack of markers we would simply turn left & retrace our footsteps along Fullen Lane & then Southfield Road to the Village Hall where we began this walk 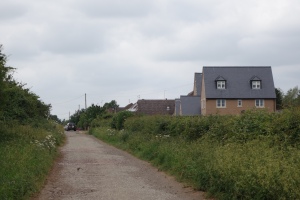 So that’s the end of our “in & out” walk from Gretton, the highlight of which was definitely seeing Kirby Hall

We wouldn’t exactly say it’s the most attractive walk we’ve done in that area – the Harringworth & East Carlton ones are definitely prettier, but it’s worth a try if you fancy a stroll to see the Hall