Distance: As long as you like! The whole walk’s probably about 6 miles, but you can dip in & out over several days

Time to walk: Lots to see & do so just take your time

Difficulty: All on road & generally flat

Parking: City centre parking, but use the Park & Rides, or the DART railway.

We visited Dublin for a couple of days in early December 2013 as part of a Northampton Saints v Leinster rugby weekend.

Here we are at the fantastic Aviva Stadium…

Having not been there for approximately 25 years, the city has certainly changed & is still recovering from the financial crisis it endured as part of the Celtic Tiger crash.

Dublin is a fast-paced city, but compact enough to see everything on foot, from the galleries & famous buildings to taking in the local bars, music & literary links

When we visited we attempted to cover the city centre only & did this over two separate days, mainly because on the first we got drenched! You can see the difference in the photos throughout. Therefore such attractions as The Guinness Storehouse & Croke Park aren’t covered. Because there’s so much to see & our time restrictions, this walk only touches the surface, but it does give you a flavour of this fantastic (& very, very expensive!!) city

We’ve also started this walk from the hotel/pub that we stayed in, but you can start from any point en route

Right…there’s a lot to cover so…

1. We stayed on the south bank of the River Liffey in a great pub/hotel called The Ferryman, which is about 20 minutes walk into the city centre 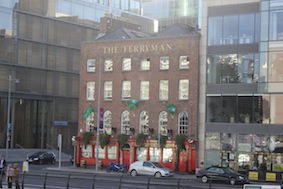 Opposite the hotel is one of Dublin’s new bridges, The Samuel Beckett Bridge… 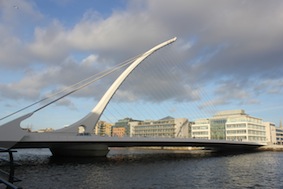 We cross the bridge & head towards the North Bank. On the right hand side is the new O2  complex which is even more impressive at night than during the day… 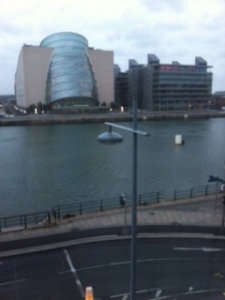 2. So after crossing the bridge we turn left & follow the Liffey along Custom House Quay, being careful not to bash one’s shins on a tow bar…….ouch!! 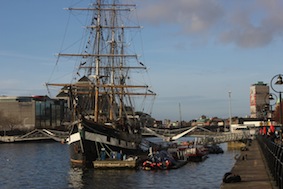 3. Dublin has a wealth of fantastic statues, one of which here is a memorial to the Dublin famine. There’s perhaps an added poignancy with these life-size bronze statues who appear to be walking past the gleaming new bank buildings 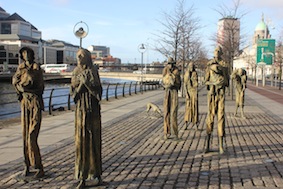 If you get time, have a walk along the south bank as opposite is a statue known as the ‘Linesman’. How brilliant is this? 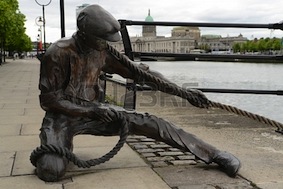 4. Now back to the North side & we come to the Custom House… 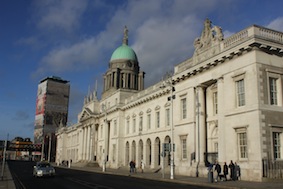 …the property was built in 1791 by James Gandon. Never one to waste a building there’s some great ‘solidarity’ use of a building 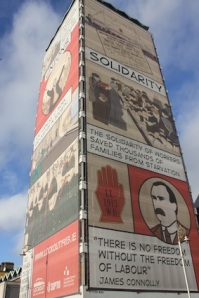 5. We now come to the crossroads of O’Connell Street, one of the main thoroughfares of the city. We’re going to head up the right side & back down the left. At the bottom end of the street near the bridge is The O’Connell Monument 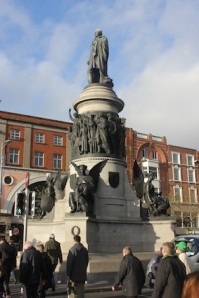 6. What’s hard not to miss ahead is the Spire of Dublin which was built in 2003 on the old site of Nelson’s Pillar. Standing at 120m (394ft) a time capsule is planted beneath it. The photo below was taken beneath threatening skies… 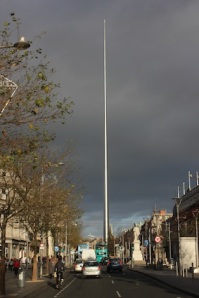 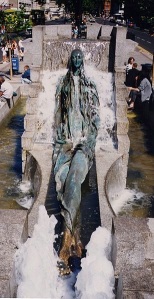 To make way for the Spire she’s now been moved to the Memorial Park..in our opinion a great shame

7. We continue further up O’Connell Street & on the right in Earl Street North where there’s a great little statue of James Joyce, an Irish novelist and poet, considered to be one of the most influential writers in the modernist avant-garde of the early 20th century. Joyce is best known for Ulysees (1922) 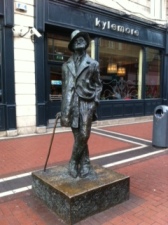 8. There’s some more statues further up the street, but we’re now heading to the other side of O’Connell Street & back down towards the river & enter the wooden boardwalk that let’s us walk along the river. 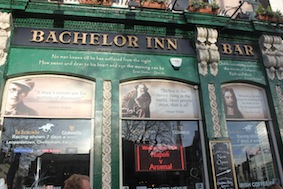 9. We continue along the river & come to one of Dublin’s most famous landmarks…Ha’penny Bridge

The cast iron footbridge connects Merchants’ Arch to Liffey Street & was built in 1816. The name refers to the toll that was once charged for crossing.

There’s a number of love locks on the bridge…

10. Across the bridge we pass under the iconic Merchants’ Arch & enter the popular Temple Bar area, home to Dublin’s entertainment & cultural quarter

At night the area throbs with live music. It’s very much a tourist trap though & the prices area generally higher than in bars on the outskirts. The most popular & famous pub is The Temple Bar

11. Now we turn back & head east along Temple Bar before joining Dane Street & heading towards Trinity College. Brave the traffic & have a look at the statues in the water in the middle of the road.

At the end of the road is Trinity College…

12. Pass through the gates & into the tranquility of the University grounds

We enter Fellowes Square & head for the Book of Kells Exhibition in the Old Library. We didn’t have time to visit so have attached some links.

The 9th century Book of Kells is Trinity’s most valuable possession. The ornate text contains the four Gospels & is one of the finest medieval manuscripts in the world. 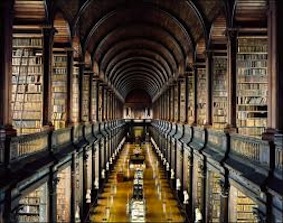 13. Come back out of the College grounds & turn left. Across the road is another of Dublin’s famous statues, Molly Malone or, as the locals call her….The Tart with the Cart! 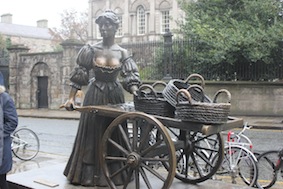 14. Turn left down the left hand side of the College into Nassau Street. At the traffic lights we into Clare Street & stop outside The National Gallery of Ireland…the weather now was foul! 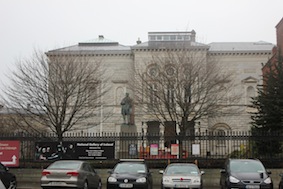 15. Back over the road it’s worth taking a peek inside Merrion Square Park. There’s a fantastic sculpture of Oscar Wilde here reclining on a 35 tonne quartz rock. 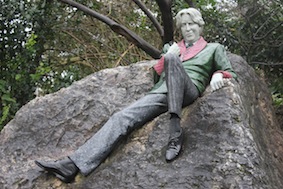 16. Also in the gardens is the memorial & eternal flame. Unfortunately the weather so bad it was hard to get decent photos so we’ve included a web night time picture 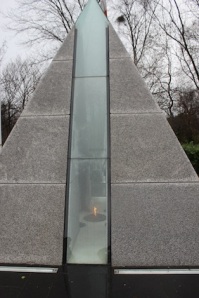 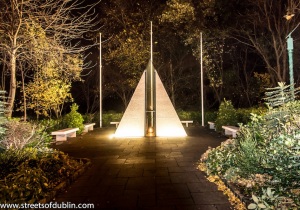 17. Before we leave Merrion Square it’s worth having a quick walk round it as it’s the heart of Georgian Dublin. We could have taken lots of photos of the colourful doors

18. Back out of the park & over the other side are two of the most important buildings in Dublin…

Firstly Leinster House where the National Parliament of Ireland sits… 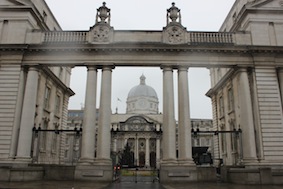 19. Now it’s time for us to head back into the city so at the traffic lights turn right into Merrion Row. We had difficulty standing up in the gales & rain! 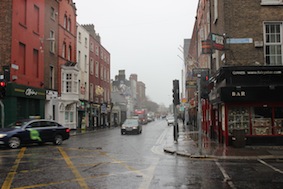 Further down on the right is a tiny cemetery which dates back to 1693. Thousands of Huguenot Protestants fled from Roman Catholic France in the 17th century & settled in Dublin

20. Back over the road is St Stephen’s Green, a 22 acre park surrounded by some old buildings. Unfortunately as the weather was now so bad we kept moving & turned right down Kildare Street. 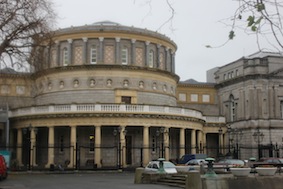 21. We’re now walking round the block & turn left down Molesworth Street & carry on turning left into Dawson Street. Have a look at St Ann’s Church which dates back to 1707

Almost next door is the Mansion House, the residence & offices of the Lord Mayor of Dublin

22. There’s a couple of other interesting places along this street… 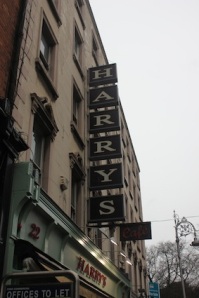 …& over the road the Celtic Whiskey Shop 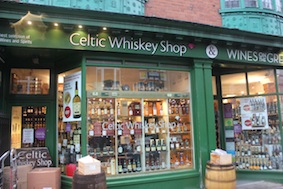 23. At the top of the street turn right & then right again down Dublin’s main shopping street…Grafton Street 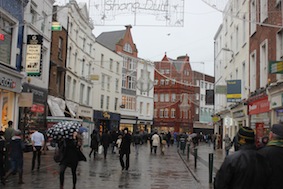 24. A little further down the street on the left is a small left turn into Harry Street where there’s a fabulous statue of one of our musical heroes…Phil Lynott

These days we can also recommend Limehouse Lizzy who really keep the memory of Phil Lynott alive. Click here to view them in action

25. Further down Grafton Street we come across another of Dublin’s institutions…Bewley’s Cafe 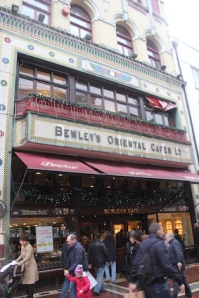 Unfortunately the queues were too long today…

26. Just past Bewley’s we turn left down Johnson’s Court & keep heading straight on & into the Powerscourt Shopping Centre 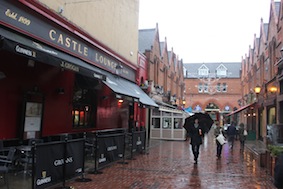 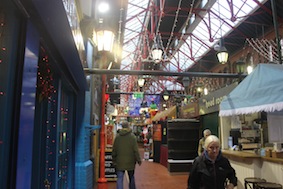 28. After a coffee we come out of the back of the market & turn right, walking along to Dame Street where we turn left & arrive at City Hall

Originally the Royal Exchange, City Hall is a civic building built between 1769 and 1779 to the designs of architect Thomas Cooley and is a notable example of 18th-century architecture in the city.

29. To finish this walk we head up the side of City Hall through the archway into the Upper Courtyard of Dublin Castle

Until 1922 this was the seat of British rule in Ireland, and is now a major Irish government complex. Most of it dates from the 18th century, though a castle has stood on the site since the days of King John, the first Lord of Ireland

So that’s where our mini tour of Dublin ends. As we said we did it over two very different days & there’s lots of other places we haven’t touched.