Time to walk: Less than 1 hour, unless the pub’s open!

Difficulty: Flat & all on road

Parking: On road. We parked just past the village sign off Main Street

Map of the route: We’ve taken the route & lots of the information on this walk from the local village itself

We’ve been researching Corby recently & are concerned about the lack of information to attract people to the town. The surrounding villages though are somewhat different, all offering much history about their buildings etc

Our walk today looks at the stunning village of Middleton. It’s funny that all Wikipedia will tell you about the village is there’s a steep hill called ‘The Hill’. That’s true, but there’s so much more, for which we’re grateful to the local village site. Middleton’s name probably comes from the Danish meaning Middle Farm. The village is also noted for the ‘stone & date’ names on many of the properties which give a clue to their previous uses. Most of the pictures accompanying this walk are of the buildings as that’s where the history is

Is this village worth a stroll around?  Well let’s have a look…

1. It’s always good to start a village walk at the village sign. Why? Because it says welcome & the things on it give you a good overview of what the village is all about. Try it…it works every time

The cycling club was formed in 1950 in response to an advertisement in the local paper.
The object of the club was, & still is, to encourage the sport & pastime of cycling in all its forms 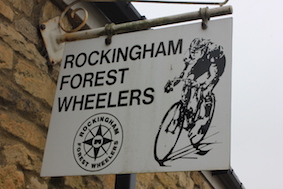 3. On the other side of the road’s Darescroft, which leads to Cannam Close, Lightfoot Lane & Swingler’s Path

These names are synonymous with Middleton…the Cannam family were well known & influential in the local area, owning the land on which we’re now standing. The Lightfoot’s are known to have surrendered their land to Sir John Henry Palmer, whose family were part of the Huntley & Palmer biscuit empire. The Palmers lived in nearby East Carlton. Finally, the Swingler’s owned the land that the current path was built on & donated it to the parish council  for access

4. Walk back up to the junction & turn left down Main Street – we’re now entering the prettiest part of the village & are going to head down one side & back up the other 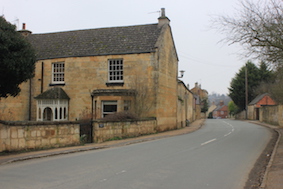 5. Further along on the same side’s a beautiful property that’s now a quality Bed & Breakfast. This used to be the Old Bakehouse & Merchant’s Store. Parts of it have had quite a mixed usage over its 400 years including stables, a bakers, shop, lending library & even a cafe

The large house with the railings is Cannam House (remember we mentioned the family earlier?). The house was built & modified in the 18th century & has many classic features

7. Next along’s No. 21 which was originally an 18th century farmhouse. It’s known locally as the ‘black horses’ due to the weather vanes showing these. The vanes are in the yard at the back so have a sneaky look. Also at the back of the house is a dovecote, but this is out of public view

8. The new house used to be the Old Forge, home of the village Blacksmith. This one was run by Samuel Swingler in the 1800’s & it was still going strong in the 1930’s. There’s a date stone on the new property. The Swingler’s were an important family in the village & we mentioned them earlier with regard to their ‘path’

Just past the Farmer’s House is one of the old village hand pumps. The village was servered by several natural springs & we’ll see one of them later 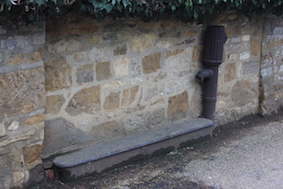 9. Vine House comes up next (No. 37) which dates back to the mid 18th century – again if you’re a building art aficionado then the decor of this property will mean a lot

Next door’s the old village orchard which has been turned into a community garden. Some of the trees are the originals

By the side of the wall’s the boundary stone between Middleton & Cottingham. It dates around the 19th century. Originally the two villages had fields between then, but now are pretty much joined

10. The War Memorial is situated just outside the village marker on the left at the junction…

11. The first property of note on our way back’s the old Manor House…

It’s now a residential home, but the stone dates it back to 1785. The roof’s made of famous Collyweston slate which has been in the news recently with more being mined for the first time in ages

12. If you asked us which property we would like to buy in this gorgeous village, it would be one of the ones in this next group of three No.s 50, 52 & 54 are beautiful. No. 50 is on the street & the other two are through the archway & all date from the late 18th century

13. The Congregational Chapel dates back to around 1834 & closed in the 1960’s. It used to serve as a meeting room for the parish council. There’s rumours there are gun shot marks in the facade of the building

Just past the Chapel’s another of the village’s pumps. There’s a date stone of 1851 at the back. History shows that the pump was still in use at the end of World War II. Although the date’s uncertain, it appears that mains water appeared in the village in the 1950’s

14. Carry on back to the junction with the Hill…

…were we turn left up it. Note the Tudor style houses on the left

15. Next door though is the village pub…The Red Lion…

The pub’s served the village for at least a couple of hundred years. We haven’t visited for quite a few years, but must rectify this

16. It’s time to stretch the legs so turn left up School Hill…

We’re now climbing steeply & normally the views across the Welland Valley from here would be amazing, but today the mist restricts them. On the right here was probably the old village Pound, an area where stay animals were kept prior to them being claimed. There’s another pump at the top

17. Now at the top you have the option of turning left & following the Jurassic Way to Cottingham (which we’ve done before), or carry on up School Hill Road 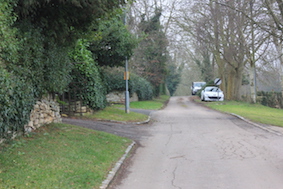 There used to be a lime kill on the left up here which was part of the village’s industry in the 18th & 19th centuries. The field on the right used to be a quarry & today has some welcoming visitors

18. At the top of the road turn right & then walk along & then right again down the Hill…

On the right’s the aptly named Hill House which was originally a farmhouse & is over 200 years old. It was once owned by nearby Rockingham Castle… 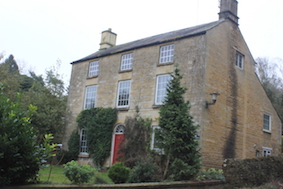 Have a look at the 3 windows at the top of the house. The wooden panes don’t exist & are actually painted on them. This is because of a window tax that used to be imposed on properties

19. Down the side on the right’s another dovecote which is built into the wall, but it’s tricky to see

20. Now follow the Hill back down to where we left the car. On the left again’s the Jurassic Way which takes you to East Carlton Park

So that’s Middleton & what a fabulous village it is. It’s grow a lot since the last times we went there & now has pretty much merged with Cottingham which is the subject of one of our other walks

It’s well worth a look so…