Time to walk: This is a town walk & there’s no limits as you’ll be stopping & exploring

Difficulty: All on hard surfaces, unless you fancy a wander on the grass in the park

I spent a day & evening in Marlow in July 2021 & can highly recommend it. I combined this town walk with an evening Walk 156 from Marlow to Hurley Lock & back along the wonderful Thames Path

Marlow’s situated on the River Thames, 4 miles south south-west of High Wycombe, & 33 miles (53 km) west of central London. The name is recorded in 1015 as “Mere lafan”, meaning “Land left after the draining of a pond” in Old English

1. Where better to begin this short walk than standing on the famous suspension bridge over the River Thames by The Compleat Angler Hotel

Marlow Bridge connects Buckinghamshire & Berkshire. There’s been a bridge on the site since the reign of King Edward III which was made of timber, though an original crossing to the Knights Templar of Bisham may date from 1309. In 1642 this bridge was partly destroyed by a Parliamentarian army

In 1965, the bridge was restored. It has a 3 tonne weight restriction but on 24 September 2016, a 37 tonne Lithuanian haulage lorry attempted to pass over the bridge, requiring it to be closed for two months to allow a series of stress tests on the hangers & pins. No significant damage to the bridge was found, & it was reopened on 25th November

2. The Compleat Angler Hotel, named after Isaak Walton’s book of the same name, occupies a magnificent position & is well worth buying a refreshment & sitting on the terrace. I can also recommend Sindhu by Atul Kochhar, especially the fixed price lunch (you’ll need a walk after eating there!) 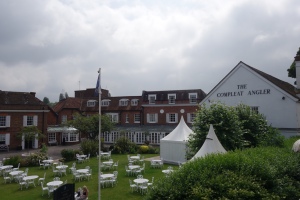 After crossing the bridge enter the churchyard & have an explore. The graveyard runs right down to the river & there’s a great bench, if it’s free

4. Walk to the other side of the church & enter the alley all the way down to emerge into St Peter’s Street… 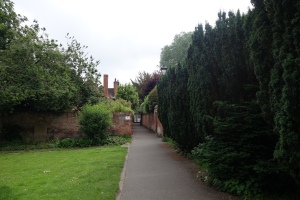 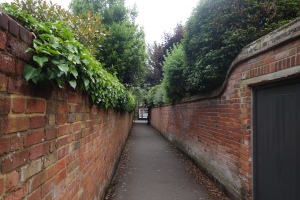 5. On reaching St Peter’s Street turn right. The attractive pub is The Two Brewers where Jerome K Jerome wrote his famous ‘Three Men in a Boat’. The book was first published in 1889, & is a humorous account of a two-week boating holiday from Kingston upon Thames to Oxford & back to Kingston

The book was initially intended to be a serious travel guide, with accounts of local history along the route, but the humorous elements took over to the point where the serious & somewhat sentimental passages seem a distraction to the comic novel

Continue down to have a look at the river – this really is a lovely area & there are views back to the suspension bridge & across to the weir, which we’ll see more clearly shortly. This is the spot where the earlier bridges crossed 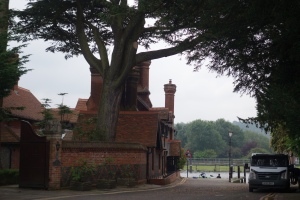 6. Come back & turn right down the amazing, bendy alley down the side of The Two Brewers… 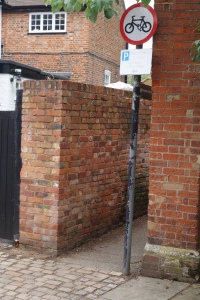 On emerging turn right & follow the road down to the corner… 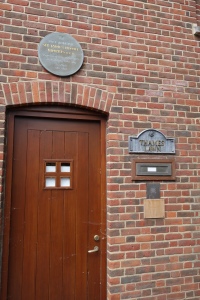 7. Continue around the corner, looking for a sign post to ‘Marlow Lock’ down an alley on the right… 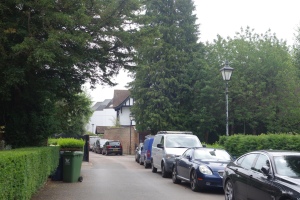 8. Everywhere you turn in Marlow you find a lovely little surprise & this area’s no different. Cross the bridge &, on the right, there’s a great view of the weir, although you can’t walk out onto the walkway itself…

On the opposite side of the bridge is Marlow Lock, a good place to stand & watch the entertainment of the boats coming through 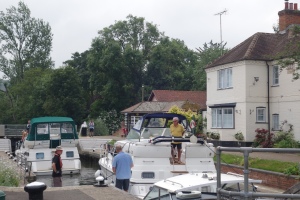 9. Cross back over the bridge… 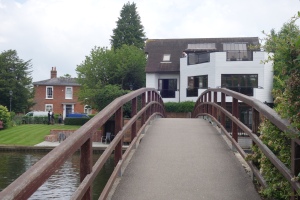 The properties in the small marina on the right are extremely desirable!

10. Walk back to the bendy alley & walk down it once more into St Peter’s Street. This is a speeded up video we took…

11. Also on the right’s St Peter’s Church a Roman Catholic church, first opened in 1846. The newer church you see before you on the opposite site of the road today was completed in 1970

12. Continue to the end of the street where, ahead of you, is the magnificent Georgian mansion called Marlow Place, which was designed by Thomas Archer in the English Baroque style, & built for John Wallop, 1st Viscount Lymington in 1721

It was briefly used as a residence of the Prince of Wales in the 1720s. It served as an overflow for the junior department of the Royal Military College, shortly after the college was established in 1802, & also served as a boarding school in the 1860s. It went on to serve as a finishing school for girls in the 1950s & is now used as offices

13. Turn left & walk to the end of of Station Road to the junction with the High Street… 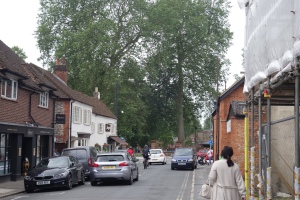 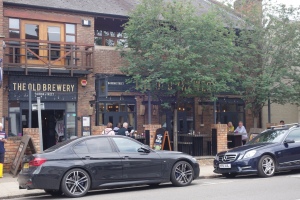 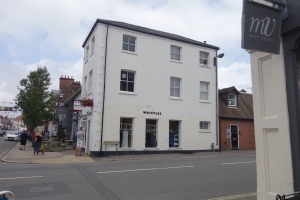 On the left, should you wish to visit it, is the Tourist Information Office. However our path is right into the May Balfour Garden, which backs onto the Mansion we saw a few moments ago

15. This is a fab little garden to spend a few quiet moments…

Within the garden is the impressive Akeler Sundial, created by the acclaimed sculptor Edwin Russell FRBS 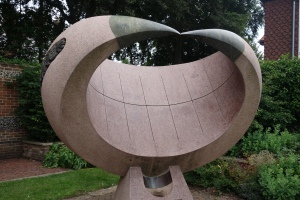 16. Return to the High Street & continue in the same direction. There’s some great restaurants & bars to stop off for refreshments 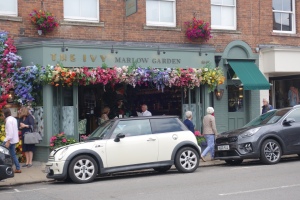 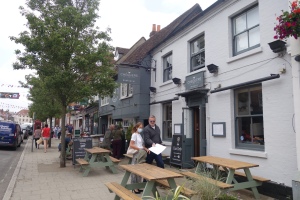 17. At the top of the road’s the former ‘Market House’, originally built in 1807 which has had many uses over the years, including more recently The Crown public house

18. Keep to the left side of the street. First up is a plaque on No. 31 telling you that TS Eliot once lived here…

And then slightly further on is No. 47, which was home to Thomas Love Peacock. Peacock, like Eliot was a novelist & poet. He was also a close friend of Percy Bysshe Shelley & they influenced each other’s work 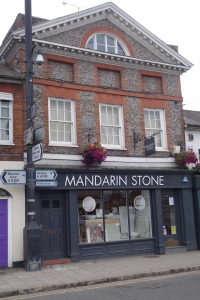 19. Further on & hidden behind the large green gates is a property called Remnantz which, between 1802 – 1812 was the home of the Royal Military College

The main house was built around 1720 & was occupied by the Royal Military Academy for training potential junior officers aged 13 to 18, until it moved to Sandhurst in 1811. We’ll get a better view of it shortly

20. Across the road is the house where Percy & Mary Shelley lived & where the novel ‘Frankenstein’ was completed… 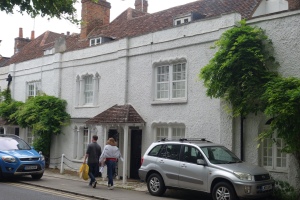 If you fancy lunch & have booked in, I can highly recommend The Hand & Flowers pub where Tom Kerridge holds his two Michelin Stars

21. Turn back along West Street along the same side as Remnantz & walk down Portlands Alley… 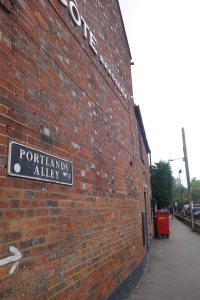 Across to the right you can now see more of Remnantz…

22. The alley eventually emerges into Pound Lane. Turn left & follow it to the entrance to Higginson Park. It’s been a park since 1926, although as a garden it dates back to 1758

Turn right at the with the large tree. There was a comedy festival going on in the park when we were there

23. Walk along to the rather magnificent buildings… 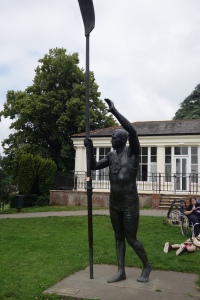 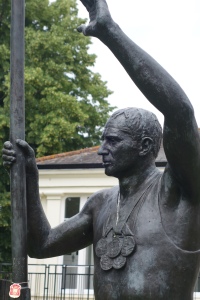 24. Turn away from the statue & building & walk straight down towards the river. Near the fence you’ll arrive at a maze

25. This is the first time I’ve ever seen this as a warning sign, but obviously take care! 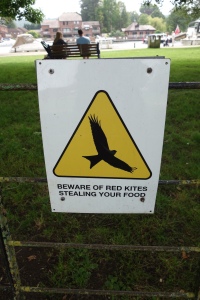 Turn left & walk along the river, passing opposite the Marlow Rowing Club HQ 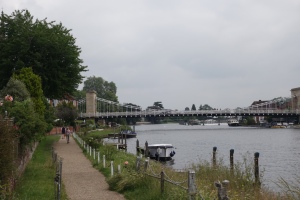 26. Turn left up the alley just before the bridge & walk out on it once more to complete this short town walk

So that’s the end of this brief look at Marlow. Combine it with Walk 156 which also starts near the bridge but takes in much more of the surrounding area & Thames Path

It’s rather fab so…