Difficulty: This is a fairly flat walk using hard paths alongside rivers & canals & then across fields for a short stretch. It’s also an excellent bird watching walk &, as well as taking in the river, also involves canal paths & a fantastic aqueduct.

Parking: Leave the main A508 / A5 roundabout & head towards Stony Straford. See picture below. Go along London Road & turn right at the roundabout & double back on yourself to park in the cul-de-sac marked with the arrow

Public toilets: Several in the town & it’s only a short walk 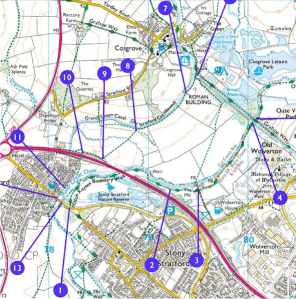 So before we start let’s have a look round Stony Stratford…..

This walk actually starts in Buckinghamshire, but we’ve included it under Northamptonshire as it quickly crosses the boundary river & is mainly in our County. Stony Stratford lies on the Roman Road that is Watling Street which runs straight through the town as the High Street. Until not too long ago this was the main road that ran north to Chester. It’s also a famous coaching town…as we walk down the High Street on the left is an old coaching inn, The Cock & opposite on the other side The Bull.

Stony Stratford’s High Street is thriving with many small independent shops & restaurants…it’s well worth spending an hour or so wandering up & down. One of our favourite restaurants is Cameron’s, run by Dan Cameron who was a finalist in the 2008 series of ‘Masterchef the Professionals’ (try the taster menu!!)

1. The walk starts in the North of the town so head towards Stony Stratford off the large roundabout along London Road, & turn right at the roundabout & then right again into the cul-de-sac. Cross the road. Our walk starts in front of the gate below

You can park down here…careful though it’s steep

Now here’s an interesting fact about this park…

2. The soft November light on a day like this is amazing for photography… 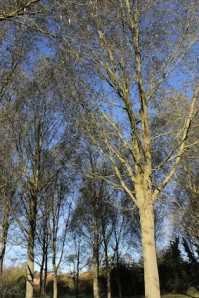 On the left’ a first view of the Great Ouse, a really varied river as it winds its way eastwards (some great barbel fishing too)

3. Continue along the path & there’s our first glimpse of the bridge under the A5 with a young swan nearby

Pass under the bridge ignoring the path on the right…

4. Now it’s simply a case of following the river…

…past a weir. Once the river then cuts off to the left follow the ‘mill race’

5. At the gate below go through & take the left path continuing to follow the ‘mill race’

6. Eventually you’ll come to the Mill House so pass through the gate & head straight over the lane onto another hard path…follow the sign that says ‘Iron Trunk Aqueduct, Old Wolverton’

7. Continue on the path round the corner & then through the gate below to meet up with the main river again.

Go through another gate & then the river changes from slow & methodical into something quicker….almost saying “come on, let’s go”…. 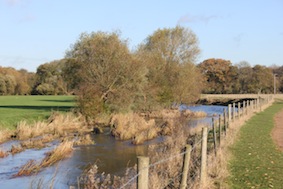 8. Eventually through the trees the aqueduct can be seen…. 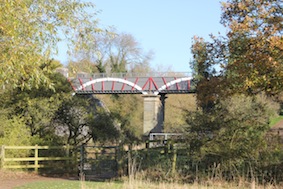 This aqueduct is know as The ‘Iron Trunk Aqueduct’. The Iron Trunk Aqueduct is a magnificent Georgian structure, which carries the Grand Union Canal over the River Ouse. Built in 1811 by canal engineer Benjamin Beavan, following the collapse of the previous brick-built structure, the aqueduct stands an impressive 10.8 metres high and connects Wolverton with Cosgrove Village. 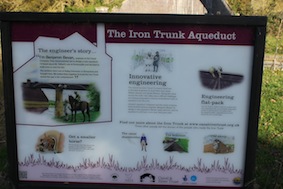 9. The local council have put in bbq areas along this stretch 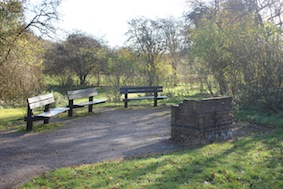 10. Right….now here’s an interesting part to this walk…head straight on through a ‘cattle squeeze’. 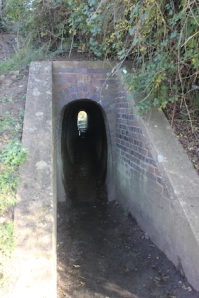 It’s about 30 yards long, so crouch down & it’s wider in the middle to accommodate the cows’ bellies – wow that’s great fun..

11. Back in the daylight, turn immediately up the steps on the right & then right again over the aqueduct…here’s a plaque that tells you about its construction…

Head across this incredible construction & take a moment to look either side….looking down will really make you appreciate the effort involved to take the canal over the gap.

12. Continue along the canal path…today there was an old sailing ship along here…wow that’s a huge rudder for this canal….

13. Head for the lock gates & our recommendation is you cross the canal via the 2nd set…beware though…they’re not the safest

14. The signpost on the far side above points to the ‘Buckingham Arm’ which says is currently under restoration…that’s the direction you need to head now. 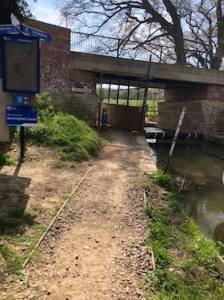 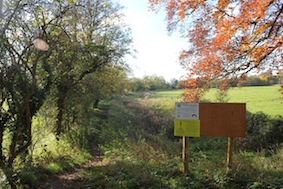 The next part of this walk is missing a footpath signpost so look out for a wood on the right hand side of the old canal. Just pass this, there’s a wide gap in the hedge on the left. Go through this & turn right walking along the same hedge, into the field. After about 100 yards head slightly diagonally across the field to the bridge you can see ahead

16. There’s now a well marked path straight across the next field

Upon reaching the hedge above climb up the slope… 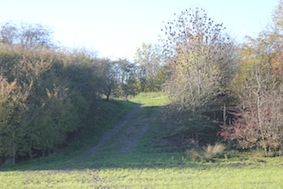 …& turn right keeping the hedge on the left. At the top of the hill turn left through the gate below & cross the bridge over the A5 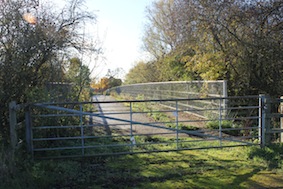 17. Follow the hard path with houses on your right

The path now runs parallel to the river & park you walked through at the start. Eventually it bends right & reaches another road in the estate…

If you’re feeling a bit sore then this might help

18. At the road turn left &, as it bends right, look for the path marker in the hedge on the left

Follow the short path back up to the main road. Turn left now & cross the bridge back to where we left the car.

So…what’s our summary of this short walk? Well, we can’t fault it really & it’s great for families & weekend strolls. There’s lots of different things to look at & Stony Stratford also offers an additional bonus to spend some time looking around.