Time to walk: Only about 1 hour

Difficulty: All on main paths. Cottingham’s quite a hilly little village, but not too strenuous

Parking: We parked on road outside the Village Stores in Corby Road

Public toilets: The Spread Eagle or The Royal George pub, but only open at certain times

Map of the route: As you can see it’s a bit of a wander!

“Villages like Cottingham clamber up and down a hillside so steep that often your view across the deep ever-changing valley into the blue distance is over someone’s chimney pots. These are the windswept villages through which a North-Easter will whistle and boom, led straight in from the Fens by the narrowing funnel of the vale of the Welland.

They are bleak in Winter, but in Summer there are few places more inviting to the traveller with lazy hours to spend. Cottingham has a secluded tree-fringed dell where you may sit with old men and watch boys play cricket. There you might believe that the industrial revolution had never come to England and that the more daring of the boys might grow up to captain a clipper, but would certainly never travel by devilish means and at unnatural speeds through the sky.”

Now…if that doesn’t make you want to explore then nothing will!

The name ‘Cottingham’ has Anglo-Saxon origins, with ‘ham’ meaning town or settlement & ‘ing’ denoting a tribal leader’s sons, dependants or followers. Cottingham therefore literally means ‘homestead of Cotta’s people’, Cotta (‘or Cotti’) having been an Anglo Saxon chief. The same tribal name is found in Cottingwith (East Riding), Cottingley (West Riding) & Cottenham (Cambridgeshire). There is also another Cottingham in Yorkshire, with the same roots

Shall we have a look then?

1. As with other villages we start our walk at the Millennium Village Sign…

The sign shows scenes from the village & also its sister, Middleton, including the village church, a horse trough, a horse rider, the village war memorial, a heron & a windmill

Cottingham played an important role in the royal hobby of hunting, being part of Rockingham Forest. It was King John’s favourite hunting forest. The heron denotes the Welland Valley’s grazing grounds & the windmill was one of three that were once in the village. The only evidence of the windmills now is one that’s been incorporated into the building of a house. The water trough depicts the importance of the springs that are in this area & we’ll see one on this walk

2. Where we are actually starting this walk is known as the Well-Head…

The grassy area above was once the village well-head which had a pump going down into the trough. The pump was dismantled in the 1960’s following mains water being introduced into the village in 1957

3. Also here is the quite charming Village Store & Cafe… 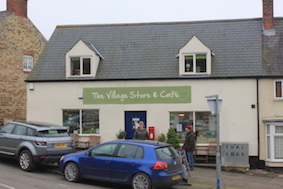 This is a fabulous community owned store & cafe so please call in & support them – you’ll get a great welcome. The shop lay empty for years  until a team of community members set up a Co-Op, & sold shares to dozens of local families. They’ve got a great little deli with some superb local produce

4. Walk up Corby Road. On the right’s the Old Bakehouse…

The Old Bakehouse dates back to the 17th century with later additions. There were three bakehouses in the village

This one though was the last working one

5. Next door’s the old Methodist Chapel…

The Chapel is split into two different parts built at different times. The oldest part’s on the right & was built in 1808  with the add on part dating around 1878.

Just past the Chapel’s ‘Greystones’, which dates back to the 18th century & used to be a butchers & slaughter house. Look down the yard where there’s a great view over the rooftops down to the church 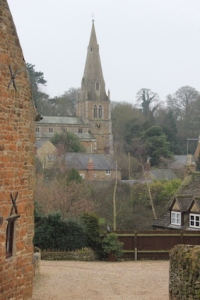 6. Continue along Corby Road looking for a narrow path down the hill… 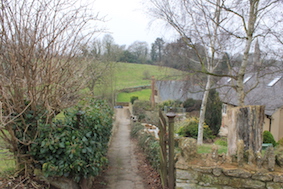 Look across the field ahead on the left. You can see the remains of an old limekiln. Lime was used in the 18th & 19th centuries for building & for producing fertiliser for the surrounding farmland. It was made by burning limestone with coal inside the furnace. The archway you can see ahead drew in oxygen to help the fire

7. Turn the corner into the narrow lane as it continues to descend towards the church. The building on the right’s got several stone faces & carvings on it. The house is called Stonewalls & used to be the home of a stone mason…

Opposite Stonewalls is a tiny building. We spoke to a couple of builders about the history of it. It was once the assay office for the limekiln where filled carts would stop to have their contents inspected. It’s now a quirky little house

8. The house on the left just before the church has a superb little vegetable garden…

This small street is called Water Lane & that’s for a reason. The spring that serves the village is situated at the foot of the steps that lead up to the church. Today water was running down the steps. The spring’s served the village for many years & is probably one of the reasons there was a settlement here in Anglo-Saxon & Roman times 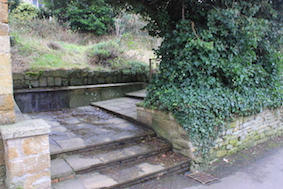 9. Climb the steps up to St Mary The Virgin Church… 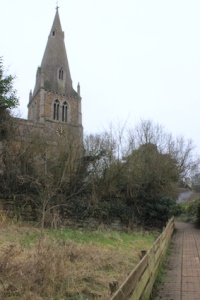 Unless there’s a service on, the church will not be open. It dates from the 12th century, although it’s a mish-mash of different styles from across the years. If you have time & the weather’s dry, there’s the opportunity to continue straight ahead on the Jurassic Way into the Dale Pocket Park

10. Today though it was muddy so we headed down the steps in front of the church into Church Street itself 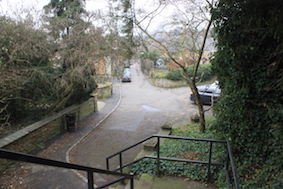 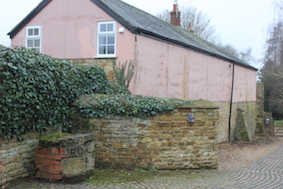 11. The road bends up the hill past the old Post Office & Grocery Store…

12. Opposite’s another old bakehouse. We’re now back at well head again & that’s the first loop of the village completed. It’s time now to start the second by walking straight over the crossroads into School Lane 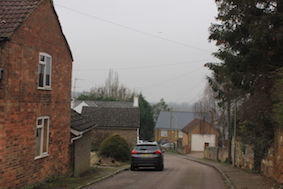 School Lane was part of an old Roman Road which linked Chester to Colchester. It was once called Dag Lane, but changed its name once the school was built 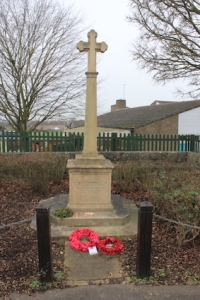 The War Memorial commemorates the two World Wars, although the village has seen many struggles over the years, due to its close proximity to Rockingham Castle. The area was affected by the fighting in the English Civil War when Charles I garrisoned Rockingham Castle with his royalist troops

13. Walk back up the hill into the village. On the right behind the gates is the entrance to Cottingham Hall, previously known as Bury House. The house dates back to the late 17th century. In the 1960s parts of the property were turned into one of Cottingham’s noted restaurants & hotels – the Hunting Lodge. It had troubled times & eventually closed in 2013, being redeveloped into residential property

Luckily one of the village’s other well-known establishments, The Spread Eagle, is still going strong at the top of the hill

14. We’re now back at well head again & this time need to continue straight up the hill into Rockingham Road 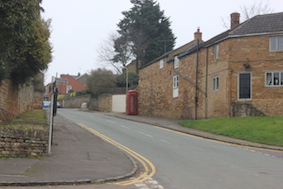 Keep on to the top of the hill where, on a clear day, there’s superb views across the Welland Valley. Unfortunately this wasn’t the case today…

15. Opposite the viewpoint on the other side of the road’s a large old factory that was once a clothing factory

Around 1870 Wallis & Linnell from Kettering built this factory & by the early 1900s over 30 locals were working here. By the 1980s it had changed into a shoe factory & then expanded into other leather goods until it closed in 2000

16. Walk back down towards the village & turn left up the wonderfully names Blind Lane…

On the right, hidden away, is a pub we didn’t know existed – The Royal George 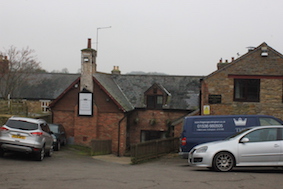 Parts of the building date back to the 13th century. Timber samples from various trusses, crucks & beams were taken to Oxford in 2000 & tests showed that the trees used were all felled in 1262 & indicate a construction date in the summer of that year (which is seven years before Marco Polo, aged just seventeen, set off with his father for adventures in Asia)

It makes The Royal George the earliest known ‘cruck building’ in England. Crucks are ancient trusses that rise from the walls & join at the ceiling to support the roof. The crucks in the roof are unusual as they are made from two separate trees (one very crooked – a clear sign of an early construction period) rather than a single tree split in two, which was the normal way

Thanks to its timbers, brickwork & central communal fire, The Royal George has a claim to being the oldest inn in England!!

17. At the end of Blind Lane turn right into Corby Road once more to arrive back at well head & the start of our walk

Well, what a little gem Nottingham is. It’s probably about 25 years since we last visited it & not much has changed, which is the best bit. Do try & visit on a fine, clear day though as that’s when the views will be at their best

And don’t forget to visit the Village Store & Cafe!